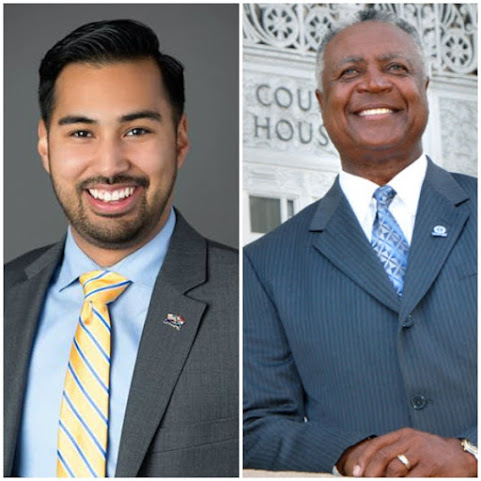 The big picture is hard to ignore no matter how MSM tries . . .

Here's the stich and a summary of the KCPS ruckus . . .

The board faced some pressure from area residents to lower the rate in response to Jackson County's recent property appraisals, which caused a number of property values to soar. Next year, area property owners are slated to pay an average of 23% more in school taxes. The school district levy accounts for about half of the total property tax bill. The district originally had planned on a 17% increase in expected revenue.

During the vote, several board members took aim at the assessment process.

KCPS Board of Directors Treasurer Manny Abarca specifically called out County Executive Frank White Jr. and his "failure of leadership."To pit neighbors against their school district is completely and utterly disgusting," Abarca said.

Fact is, most suburban newsies don't understand or would like to ignore the fact that "people of color" don't always agree.

Here's why last night's tense discussion is important because none of the suburban "journalists" are able to explain it . . .

The Latino community on the Westside & Northeast have been impacted far more by property tax assessment increases and their neighborhoods were seemingly targeted by a process that did not follow rules for physical inspections. The impact will be felt in the 3rd district also but subsidized housing and apartment dwellers simply don't feel the direct hit that many KCMO lower-income Latino neighborhoods confront . . . Note that working-class whites living in places like Waldo, Midtown and Wesport are also suffering the same fate.

Cultural note: IT TAKES A LOT for a Latino politico to call out an African-American leader in public, on the record and for the media. This almost never happens. Especially in the Midwest where Latino population numbers aren't as statistically significant as other parts of the nation; Latino elected leaders in local Hispanic communities are often more reserved, thoughtful and considered in their remarks. Mr. Abarca worked for Congressman Cleaver so in every sense of the word he has respect for the Democratic Party establishment and how politics works in this town.

However, consider that the Jackson County Prosecutor is in an all out war of words with Exec Frank White, the Legislature is united against him, a litany neighborhood leaders and residents are fuming mad over tax fear and now establishment politicos are taking on the Courthouse Administration.

Without question, Jackson County Exec Frank White is no longer a beloved former baseball player but merely an elected official currently under siege.

Manny did great but i have a question for you TKC:

He said he cared about affordable housing but he's absent from this discussion?

He too busy? I'd like to see what he's working on when a lot of the longest residents this city are getting thrown out of their houses.

Frank doesn't care. He's more than content to rely on the "Freedom" vote to win the next election. Talk to him, in his mind he's still the most popular guy in town and nobody can tell him otherwise.

Love to see the Democrats eating their own but here's my question: What are they doing to do about it? It's a long three years before Frank White is up for election again. And those tax assessments are permanent, they rarely decline over the years. It's going to take more than "calling him out" to fix this. What's the plan? Complaining isn't going to do much when those bills come due in a couple of months.

Everyone should sit down in the same room and figure this mess out; Chair of the Legislature, County Executive, Prosecutor, School Board Chair, Clay Chastain (just for fun).... sit down, talk to each other, and fix it.

With taxes from the thousands of new apartments in the downtown area, they are getting a big windfall.

Manny is a faggot. The KCSD is disgusting and a total failure. Who does that faggot think he is? He can’t call anyone out when he is on the board of the worst school district ever, anywhere. Shut the fuck up, motherfucker.

Can we get Frankie boy off the golf course to deal with this mess? What a cluster f$$k

Mexican's typically don't like blacks but it never gets talked about because of the whole POC meme. Mexican's and latinos haven't been through the white guilt school

Have a look at the deal Manny got on his assessment. Yup..... worked like a charm.

Wow now we are getting fucked over by the School Board. What a city!

Never voting for another tax increase for the school district EVER. Forget it. They do not deserve support from KC taxpayers because they are quick to talk a big game but then take the profits right or wrong.

Why is this so difficult to get resolve? Didn't the Board of Equalization already have a solution ready? Frank just had to approve it. Instead every home owner who isn't a millionaire hanging by a thread.

Thanks a lot Frank, nice work.

If you're looking for Quinton, you can only find him on Twitter.

Okay, if you don't like what's going on if you don't like how things are going and the cost that were seen coming out of the county then MAYBE the school board should have at least considered lowering their Levy? Don't put this all on Frank oh, I'm not apologizing for him in any sense but I will say that there's a lot of other people at fault here. For instance the legislature hasn't done much to come up with a solution they'd rather just badmouth the executive. Same thing with the BOE. We have a lot of people pointing fingers and casting blame but very few willing to take responsibility and get together and work on a solution. What's worse is that so far we see absolutely no leadership from the mayor either.

How can so many clowns fit into one little mid-west car?
Jackson County and KCMO has to be the epicenter of incompetent and dishonest government for the entire country.
Be sure to live somewhere else so that you can watch this farce from afar.
And the voters elect these people over and over again.

"I wont ever vote for a tax increase for the district again"; its likely you have never voted for one for them in the 1st place.

You better be careful in this pc world, you have to say “in the black movement clown car”!

Thank you Manny! Appreciate your honesty and strength is asking the the questions that need to be asked. You are doing a great job.

Frank got showed up by a Mexican! Blacks hate Mexicans, that ones gonna hurt for awhile, rubbing dirt on it won’t help either!

Why do dummocraps suck so much? Man they have become lower than crackwhores

Frank could fall in a barrel of tits and come out sucking his own thumb.
He has worn out his welcome and should go retire where no one knows him.
Next time his house goes to eviction or bankruptcy- please- no one pay it off for the moron.
What incompetence. Let’s take his KC Royals records and invalidate them and erase his name from any Royals records.
What a pain in the ass.