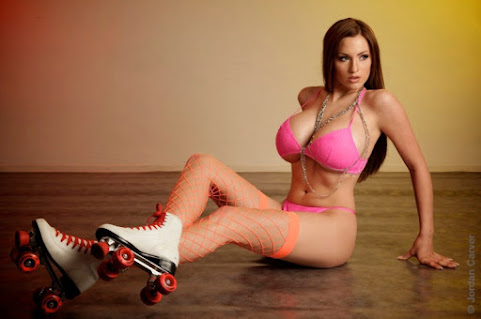 We quickly double back to remember Jordan Carver hotness and also pay tribute to her help inspiring dudes to take notice of female sports of all kinds. Checkit:

Forbes: Why California’s Fair Pay To Play Act Could Be A Financial Win For Female Athletes

KANSAS CITY, MO (KCTV) -- City buses have surveillance cameras in several spots inside and outside of buses. Those cameras captured three different angles of a driver smashing into the back of a KCATA bus on September 12. From one angle, you can tell the exact moment of impact as the camera shakes.

THIS IS A PAIN THAT WILL NEVER GO AWAY. BRIAN: JENNIFER GIBSON MOURNS HER SON WHO WAS SHOT OUTSIDE THE DOLLAR TREE WHERE HE WORKED. PUT THE GUNS DOWN. I AM TIRED OF SHOWING UP TO ASSEMBLE FOR VIGILS. YOU CANNOT GO BACK.

SHAWNEE, KS (KCTV) -- Royal Krueger is known as the Mayor of Shawnee Town. From family friendly events to museums and an awesome community, Krueger says in Shawnee, you get a small-town feeling with a lot of people. "I don't want everybody to start coming here, no.

Can you land an airplane on the deck of a submarine? Can you build a swimming pool out of cheese? Can you lift a house with two helicopters glued together? These are the strange and hypothetical questions that inspire Randall Munroe, whose internet-famous comic series xkcd is known for its stick figure cast and impractical wit.

KANSAS CITY, MO (KCTV) - The Kansas City Zoo has welcomed a Masai giraffe calf named Chandy. The zoo posted on their Facebook page Monday that they have welcomed two-week-old Chandy to the herd. They also posted on their page that Masai giraffes are endangered and that their population has declined by more than 50% in 30 years.


Royals storm back late and steal one in Oakland, 6-5

Jorge Soler hit his 45th home run of the year to tie Mike Trout for the American league lead as the Royals steal one in the ninth from Oakland, 6-5. With the lines from the game yesterday between the Chiefs and Raiders still painted on the outfield grass, Kansas City paid homage to its stadium neighbor's speed in the top of the first.


Hot weather will continue for your Tuesday

MILES PER HOUR. THERE IS A LITTLE BIT OF A BREEZE GOING THROUGH THE EVENING AND SEE JUST A SLOW DECLINE IN TEMPERATURE OVER THE NEXT FEW HOURS 85 DEGREES PEST AT 7:00. THEN THE LOWER 80'S HEADING TOWARD 8:00 AND THIS EVENING. BY TOMORROW MORNING, WE'LL SEE LOWS NEAR 770 DEGREES THEN ANOTHER WARM SPOT.

Chandy will live a lot longer in the Zoo than she would in the wild.
Very few Rich Republican "Sportsmen" shooting animals from helicopters at the zoo.