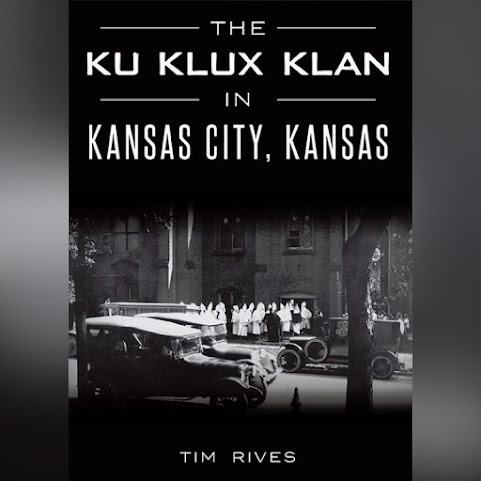 Info on an important historical reference that offers insight on the current modern day political discourse . . .

The Ku Klux Klan kicked off a nationwide revival in 1921 and took Kansas City, Kansas, by storm. The majority white population--alarmed by the influx of immigrants, Catholics and Jews--joined the Klan in thousands. The Klan held picnics, drawing crowds of 25,000 people and parades up Minnesota Avenue with thousands of Klansmen, electric lights and robed horses. They also intimidated African Americans, vandalized Catholic cemeteries and censored "offensive" books from public library shelves. Its members fed a political machine, electing more than one hundred Klansmen to local offices, from the district attorney to the mayor. Rives shares this troubled and little-known story, where the men of the Klan's inner circle ruled the city for nearly thirty years.

A lot of the b.S. comments on this blog confirm the same racist attitudes exist today. Maybe there needs to be a discount so that the dinks who play crybaby about being white can learn something.

KC and Kansas overall have been pretty liberal historically. KCK was always the exception.

Just the other day at the grocery store in the produce aisle I saw an evil white male in a white sheet hiding behind the watermelon display, just waiting for an innocent "Gentle Giant" to wander by. HE HAD A ROPE AND WAS GOING TO LYNCH SAID "GENTLE GIANT" NEXT TO THE CAULIFLOWER!!!

Obviously, the only thing to do, at this point, is to act LOCALLY!

We must free Brandon Howell from his cell in order to facilitate even more murders and violence against evil whites.

Heroes like Fredrick Demond Scott, the Black Indian Creek Serial Killer should be freed TODAY from his illegal incarceration to once again bring justice (No justice, NO PEACE!!!!!) by way of even more justified black on white killings in order to compensate for the death of Emmett Till. He and Brandon Howell, have, at this point, the best resumes for effecting this quest for "Justice" and "Peace". They have, by themselves killed more white people than the KKK has killed black people in the last 50 years, so, obviously, we should play to our strenghs.

You know, lies, specious narratives and the encouragement of hatred of whitey based on ex post facto convictions of current whites with the sins of the past, even as innocent citizens bleed out in the streets.

Hell, lets admit it, all white people come from families that owned HUGE plantations that looked like TARA in Gone With The Wind and we all raped and beat our slaves like in the movie DaJango, so, WTF, we all deserve to be murdered by black people, or, at least marginalized, replaced, economically diminished and of course, pony up billions for "Reparations".

Shut the fuck up.

^^Get your lazy, good for nothing, geriatric ass to work chuck! God, you're so fucking lazy! No wonder you have to keep working at your age!

Nah. The left lives on empty propaganda about race. Instead of having the guts to acknowledge obvious black dysfunction in real terms, we get regular and consistent programming about White Man Bad. When's the last time the KKK killed anyone? Are they still around?

Meanwhile the beat goes on. The black 'community' continues to murder its own in numbers that dwarf the fondest hopes of the racists of the past.

In other words, the left seeks to close off conversations about race, and has chicken-littled the word 'racism' into total meaninglessness. Instead of being an assessment of hate, it's a political weapon to close off unwanted comment and to keep the myth of eternal black victimhood alive.

Chimpy! You're a fine one to talk. We pay for all of your bananas! Now stick to your usual script or no bananas for you, silly monkey!

7:48 Your timing in now way covers for your retardation, but, I am walking out the door.

I leave you the field, where, you will no doubt, shit your pants.

I'll be there looking for ways to improve my Klaven. Join me!!!

The KKK members are traditionally Democrats. Robert Byrd was a mentor to Hillary Clinton. Lincoln was a Republican. The Democrats conducted the longest filibuster in US history to stop the Civil Rights amendment. If not for Republicans it never would have hit LBJs desk. Wake up black voters the Demoncrats are playing you for fools.

^Ugh. Do better moron. Why aren't you at work?

Those were the days !

The real irony is most of today's white nationalists would have been on the receiving end of the Klan's 1920s nativism.

They hated everyone who was not a northern European Protestant, and that included immigrants from southern and eastern Europe, especially if they were Catholics, Jews, or Orthodox Christians.

So if your family's origins are in Italy, Poland, Greece, or a host of other countries, and if you're a white nationalist, you might just want to think about what your family had to endure less than a century ago.

The KKK was NOTHING. Planned Parenthood eliminates more BLACK LIVES every month than the KKK has in its entire existence!

And the KKK was a DEMOCRAT PARTY creature.

^^^^First, that's debatable. Second, Planned Parenthood does not grab black (or white) women off the streets and force them to have abortions. The decision to have an abortion is that of the women who are having one as it should be.

If you oppose abortion, don't have one. But don't force anyone to become an incubator against her will.

IF YOU OPPOSE MURDER THAN DON'T MURDER!!! SIMPLE AS THAT

Democrats are replacing blacks with illegal immigrants on the plantation.

and look at kck today, press 1 for espanol, press 2 for vietnamese, no english solly charlie. yea, the klan was wrong about alot of shit, theres nothing wrong with anglo celtic ethnic pride tho

10:27
Unhinged genius.
Lost part of his pecker when his mammy tried to coat hanger his ass and then changed her mind.

You guys have it all wrong, the red star says it ain’t murder, it’s revenge and that’s ok so.....

Sorry Sylvester these fools in here don't let things like history be allowed or considered when trying to talk facts. They are just a bunch of losers who talk poop and present nothing but hate all the time.

1:24: Could you provide a cite for this? I find that Eisenhower signed into law the 1957 Civil Rights Act, which passed both houses of Congress by a majority of both parties.

I'm not able to find that Ike proposed a civil rights act in 1958.

Why is this shit being brought up? Why

1:54, what I'm finding is that LBJ sent the Civil Rights bill to a Senate committee populated by southern Democrats, who amended it to such an extent that it emerged a pale shadow of what it was. Then the consummate liar/politician LBJ claimed credit in the North for getting a civil rights law passed, and in the South for watering it down to nothing.

Funny how the conversation rarely mentions the BLACKS WHO SOLD AND DELIVERED BLACKS to slave traders for transport.

We should have an investigation in Africa to find the descendants and prosecute them?

The KKK is desperately needed in Kansas City.

Today’s Democrat party have moved on from their KKK lynching days to more efficiently kill blacks in the womb. Yet, they can count on the votes of the ones that don’t get aborted, weird?

After 10,000 labor and anti war organizers were arrested and imprisoned during the Palmer Raids of 1919 the KKK were able to march in the streets without getting their balls kicked in.