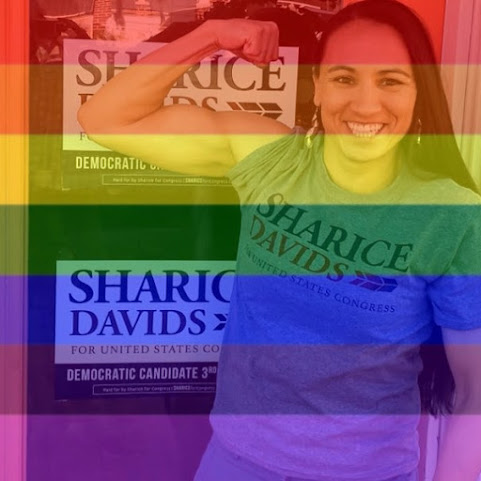 The formula for popularity contest victory isn't simple but it seems that a bit of campaign trail dynamism and media love is definitely part of the equation and a local candidate seems to have both in abundance.

"Lesbian Rep. Sharice Davids managed to turn Kansas’ 3rd congressional district blue for the first time since former Rep. Kevin Yoder claimed the seat for Republicans during the 2010 midterm election. Davids certainly can’t be mistaken for a conservative, but she has successfully managed to eke out a comfortable perch for herself as a pragmatist. Pragmatism above all else is something that the vast majority of independent voters—the voters who largely decide elections in moderate districts—want from candidates because it shows that they value compromise over partisanship."

Whilst she might earn a great deal of criticism from Internets trolls, let's remember that she doesn't really have a serious challenger yet and looks likely to win another term whilst walking a thin line betwixt THE SQUAD vs. Establishment Democrats.

don't get the haters riled up Tk. This is supposed to be their day off.


Hey 7:23 Why don't you get the hell out of our city SICK FREAK!
Sharice Davids is in congress for one reason only and that's to the sick agenda of being a perverted psychopath. She has done nothing for JOCO.
All of my heroes killed Indians.

7:23: As you can see they'll be doing double duty today since no one's going to invite them anywhere.

7:44: And yet she's in Congress and you're spewing bile on a holiday. Weird.

Sharice is a stupid cunt.

Is she a 100% lesbian? Has she ever gotten fucked real deep and hard? I doubt it.

8:24 you couldn't afford the taxes alone on my place now ain't that some weird shit.

Yes we all know the politicians are going to do wonderful things for us.

Give the fags Perfect Village will they be happy than ?

The case for moderate Heterosexual 2020 Democrats

you would think everyone was queer but it just isn't the case. only a very small percentage of people are like that.

it is a waste of time and energy to focus on such a small and insignificant part of the population.

We need a republican version of indivisible for the next election. What goes around comes around Pocahontas.

Sharice is in congress because she ran against Yoder. Even republicans couldn't stomach voting for him. This will be her last term if she doesn't start getting things done.

^^^^
Davids is a freshman member of Congress from a small insignificant and mostly Republican state.
Her ability to "get things done" is ZERO, especially considering her total lack of ideas and understanding of the legislative process.
She is a clown and an embarrassment and will be gone after November 2020.
Although the qualities that make her ridiculous would make her an excellent addition to the city council in KCMO.
Maybe she'll move and try to be successful.
Just like Jason Pander.

She'll end up managing a Dollar General in New Mexico.

In the coming Depression Her District will be Hit the hardest. Corporations will not be able to afford to pay eighty thousand dollars a year .Business Revenue will be cut. Home Forclosers,Consumers cutting spending.