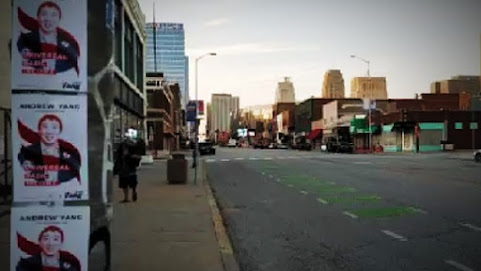 The Kansas City Yang Gang is working on an urban core mural in honor of the outsider candidate, they've been papering Midtown with signs and they seem to be having a bit more fun than most of the locals who have taken all of the excitement out of early election season with social media fist shaking, blood curses and crybaby tactics . . .

Does their guy have a chance??? He's certainly not the front runner but Andrew Yang did earn the most notable one-liners of the debate last night.

Here's a rundown and another opportunity to consider the future of the Democratic Party going forward . . .

UST: Andrew Yang on healthcare during the Democratic Debate - 'I'm Asian, so I know a lot of doctors'

Hill: Yang wears his flag pin on the wrong side at Dem debate

Time: Andrew Yang Plans To Give Out $1,000 A Month to 10 Families. That May Be a Violation of Election Law, Experts Say

BuzzFeed: 25 Tweets That Sum Up The Petty Nature Of The Democratic Debate

Smarter than most of the candidates and made his own money.

Yang and Gabbard notwithstanding, has there ever, EVAR been a more uninspired, desultory, ruined band of empty suits than this group of pandering, lying, pompous, blowhards in American political history?

The "Yang Gang" is a clueless crowd exhibiting the same discernment of political success as the crowd who were gaga about Jolie Justus and Jason Pander.
An echo chamber is probably not the best place to make decisions about pretty much anything.
If the Dems want to have any chance of beating Trump, they had better start getting serious and stop making believe empty quips, clever sound bites, carefully rehearsed gotchas, and pompous lectures are anything but vacuous entertainment.
And if the election is going to be about entertainment, Trump will win.

A bunch of ying yangs if you ask me.

None appear to be leaders to me. All salesmen not a manager amoung them.