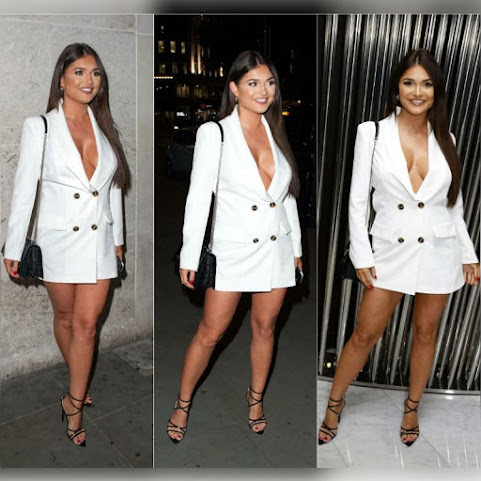 Saw1st: India Reynolds Leggy and Boobs at STK in London

Jezebel: Workplace Study Finds Men Have Responded to MeToo by Becoming Even Shittier

At this month's Northeast Kansas City Chamber of Commerce Luncheon, Gregory Stribling, the capital projects manager for KCU (Kansas City University of Medicine and Biosciences), gave an update on the new Center for Medical Education and Innovation building currently under construction. The four-story, 56,000-square-foot facility is anticipated to open in March of 2020.

REPORTER: FIVE-YEAR-OLD POMERANIAN MIX BANDIT IS TOO COOL TO DROOL AT THE POOL AND HE MIGHT BE THE MOST EXCITED SWIMMER HERE. GOOD BOY. REPORTER: THAT'S WHY BANDIT AND HIS BEST KYLEE CAME OUT ON TUESDAY NIGHT, HAVE A LITTLE FUN, AND DO A LITTLE FETCH.

KANSAS CITY, Mo. -- A campaign to help you budget better and eliminate debt is coming to Kansas City. Dave Ramsey's a best-selling author and media host, teaching people how to better manage their money. Now his signature program Financial Peace University is part of a citywide program in Kansas City, Margin KC, which officially launches this weekend.

While Sporting KC is in the midst of fighting for a playoff spot, they signed their 12th home grown player in team history. 21-year-old Felipe Hernandez.

KANSAS CITY, MO (KCTV) -The Royals foul ball netting project will now be extended until 2020. According to a tweet posted by Jeffrey Flanagan, a Royals MLB writer, the netting will require more engineering and will happen by the home opener in 2020.

Mike Kennedy is the new PD and Operations Manager at Entercom's 106.5 The Wolf (WDAF-FM) and 99.7 The Point (KZPT-FM) in Kansas City. Kennedy has 30 years experience in Kansas City, including KBEQ-FM from 2002 to 2017. Kennedy also served as Vice President of Programming in Kansas City for Wilks Broadcasting and Steel City Media from 2007 to 2017.


Comfortable weather for your Wednesday

I bet that India Reynolds has a hot little pussy. I’d screw her real deep and hard.

She wouldn't touch you with a 30ft pole. You're beneath her.

So Mike Kennedy gets a job in radio again. What happened Mike, the ole lady's small salary wasn't enough coming in to support your Olathe lifestyle? Scraping the bottom of the barrel to get that job I'm guessing? How does it feel to be getting paid that low of a salary to be head of what? Your taking over two stations that are sucking major in the books and won't get any better in the dying world of radio in Kansas City. Face it Mike you couldn't get a better gig because you are not as great as you perceive yourself to be. In short you did okay in Kansas City till it all went south on you but elsewhere in the world of radio outside of Kansas City people say, "Mike who?" Next question is how many Jocks will lose their jobs or quit rather than work under you? Should have stayed retired rather than trying to make a come back and going out probably a loser when Entercom well known for changing how things will be shows you the door again to retirement. Just ask all the Jocks who were more famous than you here in KC that use to be at 99.7 how that works. Johnny Dare is the big dog at Entercom a position you will never have there. Taking over two stations ranked 9 and 11 is nothing to be proud of. Adult contemporary music, come on Kennedy what do you know about that? Should have stayed retired and maybe remembered than to come back and fail because that is for sure what people will remember about you.