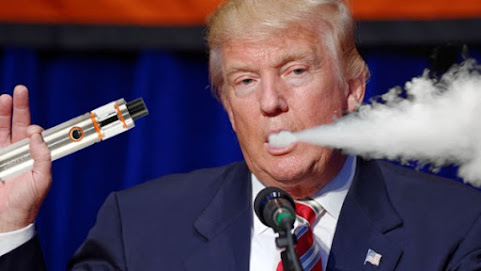 This one deserves more attention as small biz pushes back against the Prez in a fight for their livelihood amid a recent deadly health scare.

On Wednesday, Trump announced a plan to ban the sales of most flavored e-cigarettes at a time when hundreds of people have been sickened by mystery lung illnesses and teen vaping continues to rise.

Donovan said the recent illnesses are due in most part to the ingredients people are ingesting, most he said are not legal.

He said there are plenty of places that sell regulated and tested e-cigarette flavors. His store is one of them. He said it’s unfair that the President’s plan unfairly targets his business and others.

"They're lumping in the whole vapor industry because these folks are using a vapor-style cartridge to ingest this THC," he said.

Six people under 18 die from vaping die and the fat orange fascist wants to ban them (which I'm fine with) but guns that have killed millions? Naw, can't do anything about them.

Trump just wants to keep deflecting the news. Every time he gets negative press, he invents a new diversion.

^^^^And yet you didn't offer a rebuttal. Weird.