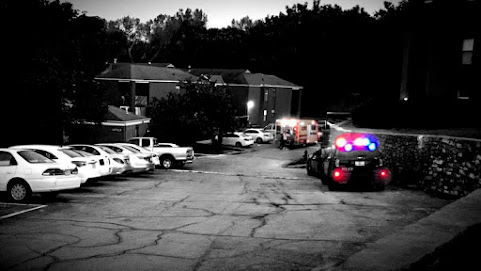 KCTV5: Police are investigating a triple shooting when one person is in critical condition.

According to police, they were dispatched around 7:15 p.m. to an apartment complex near 108th and State Line Road on a shooting call.

When they arrived, they discovered three adult men suffering from gunshot wounds.

All three men were taken to the hospital. One was grazed by a bullet and the other two suffered serious injuries.

The thought that what's needed here is "conflict resolution" is the latest joke.
How about basic civilized behavior, a little consideration for other people, and respect for human life?
The carnage in parts of KCMO are a scourge on the entire metro and few individuals in positions of responsibility or authority even have the guts to call out who's involved.
Get serious and get these people off the streets before they hurt more perfectly innocent young women or little kids.
Maybe Lucas can pause long enough from his gay baseball league speeches to do his job.
He's sure following in rah rah empty suit Sly's footsteps so far.

Didn't think that was a shit part of town !?

Just take away the guns in Montana. That should help here, wouldn’t it?

Leawood will now be building a boarder wall on their side of stateline!

It only counts if someone dies. All is well in KCMO.

Ain't nobody tell me nothing said...

Hear gunfire most nights in this part of KC. Hope police can do something to clean it up!

No Silvester the turd, but if if we take away the guns here, that will help! You retard!

No it won't. Chicago has one of if not the highest crime rate involving guns and its gun free zone, how is that working out for Chicago.

This is the same part of town where a guy killed 4 or 5 people a few years ago. Crimes happens everywhere..