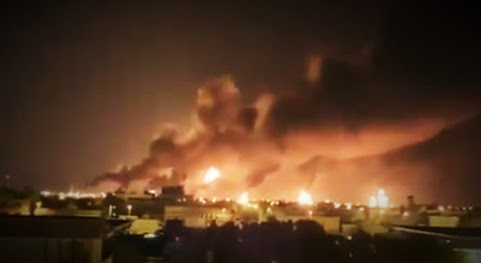 The midnight oil is burning and that's not a good thing.

One last check-in for our late night/ early morning Sunday readers with these news items that don't fit anywhere else and deserve a look for the locally well-informed . . .

First and foremost, a TKC reader writes matter-of-factly without pride or prejudice . . .

"President Trump stands ready to fulfill his mission of initiating war against Iran, though they may save it for Summer 2020 to boost him politically. Iran is the "last man standing" among the countries identified years ago by the Pentagon/Military Industrial Complex as ripe for regime change."


Trump: US 'Locked and Loaded' to Respond to Saudi Oil Attack 'Depending on Verification'

President Trump tweeted Sunday evening that the U.S. has "reason to believe" the administration knows who is behind the drone attacks on a Saudi Arabian oil fields, and that military is "locked and loaded depending on verification."

KANSAS CITY, MO (KCTV) -- Kansas City police are on scene of a standoff after shots were fired from a home. Officers were called to the 11400 block of Herrick Avenue around 8:45 p.m. for a party that was armed with a gun. When police arrived on the scene, they heard gun shots and took safety precautions.

The War At Home

KANSAS CITY, Mo. -- Trauma is a fact of life for many Kansas City youth, especially in the urban core. On Saturday, researchers, teens and community leaders coming together to examine the hidden consequences of violence in Kansas City.

Wait On The Water

KANSAS CITY, KS (KCTV) -- Operations at Fairfax Assembly Plant in Kansas City, Kansas will halt at midnight if GM and the union can't reach a deal. Local 31 Union President Clarence Brown was in Detroit Sunday morning at the bargaining table with GM.

Next to Sprint, Hallmark may be the biggest household name to come out of Kansas City, yet its founding family and current stewards continue to point the way toward a business culture worth emulating.

Beautiful Message Sent From Behind The Walls Of The Vatican . . .


Pope Francis: Do not waste God's gift of peace

Pope Francis sends a message to participants of the 33rd Prayer for Peace Meeting: "Peace with no borders", and urges unity and respect, for all peoples and for our common home. By Francesca Merlo "It is a source of joy to see that this pilgrimage of peace ...

Getting Hot In Here

WEEK. HOT DAY. I THINK WE WILL SEE A FEW MORE 90 DEGREES DAYS. HANG IN THERE, WE ARE GOING TO CALL THINGS OFF. A FEW MORE DAYS AND WE WILL GRADUALLY SEE COOLER AIR MAKE A RETURN. IT'LL STILL HOT AND HUMID, 89 DEGREES IN KANSAS CITY, 90 IN OLATHE, 91 IN LEE'S SUMMIT.

Eighteen years ago this month a terrorist group created by, funded by, led by, and conducted by a strike team whose majority were citizens of - Saudi Arabia, killed over 3,000 US Citizens.

At that time a Republican US President lied to the American People in order to justify starting a war (that still continues) whose sole accomplishment was the elimination of what was then Saudi Arabia's strongest opponent in the Middle East.

Since then Saudi Arabia has been proven to be the major source for funding of all "Islamic Terrorist" groups still in operation around the World.

Now, in order to boost his decreasing chances of reelection, yet another US President is on the verge of initiating another "forever war" against the strongest still existing opponent of Saudi Arabia!

SAUDI ARABIA KILLED THREE THOUSAND AMERICANS!
REPUBLICANS, STOP STARTING WARS WE CANNOT WIN!
REPUBLICANS,IF YOU START WARS, FIGHT IN THEM!
AND REMEMBER, THE ENEMY OF MY ENEMY IS MY ALLY!

The Saudis were and are working with the Israelis and the CIA. It is all about controlling the worlds energy markets.
Oh by the way, them aluminum planes didn't bring anything down by themselves. The one in Pennsylvania missed building seven by a long shot and still brought it down. Strange eh ?

No evidence has been presented to prove Iran is responsible for the attacks.

Are we about to embark on yet another phony war?

Will these alleged Iranian bombings turn into Agent Orange's Reichstag? Or just another WMD (war of mass deception)?

6:07 Very nice, but you only get 1/2 credit. Saudi Arabia was complicit, yes, but they really just contributed funding for the operation. Dig a little deeper and you will conclude that 9/11 was impossible to pull off without the planning, coordination, and management of some within the GWB Cabinet, military, CIA, FBI, NSA, etc. Israel is more to blame than Saudi Arabia, as they did much more of the actual logistics and hands-on work. The Saudis just wrote the check.

^^Tin foil brigade heard from. You two losers go back to Infowars please. We already have chuck for all of our kooky conspiracy theories. We don't need anymore of you! We're all full up on crazy here.

15 of 19 (79&) were Saudis,
2 from the UAE, who had lived in SA since childhood.
1 "Egyptian", a long-time Saudi resident who had applied for citizenship,
1 Lebanese, again a long-time SA resident.

Supposedly all 19 were "al Qaeda" members, and "al Qaeda" was founded in Saudi Arabia (with CIA backing) during the Russian invasion of Afghanistan to "fight Russians", and which was headed by a long time associate of the Saudi Royal Family, whose mother was one of the Family's cousins.

If it looks like a duck, quacks like a duck, and shits through feathers, what does it matter what the "official story" the US Government and Media keep shouting is?

^^^Ugh huh. Time for a diaper change pops. You can get all geeked up again about the inter-webs and the deep-state shit after Matlock. You love the Matlock remember???

Did 2:51 escape his padded cell and find a computer in the memory care center?