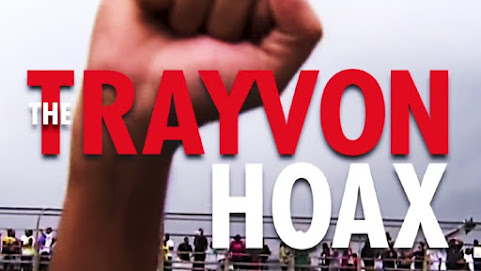 Allegations of witness fraud in a murder case which facilitated some of the most divisive "progressive" partisan political rhetoric in the modern era surround the release of an alternative documentary movie.

Posted not because we agree or disagree but merely that there's no doubt this conversation is gaining traction locally despite Republican allegations that social media is skewed against the right.

Here's the best summary of the work from a prolific and very talented author who has a massive following of local conservatives . . .

Jack Cashill: The Trayvon Hoax That Divided America Is About to Be Exposed

"In the course of his relentless research into the shooting and subsequent trial, I can say without risk of overstatement that he has unearthed a legal fraud the likes of which I know no parallel. Not only has Gilbert discovered it, but he has also proved it six ways from Sunday, including DNA and handwriting analysis . . .

"In the documentary and even more so in the accompanying book of the same name, the Trayvon Hoax, Gilbert shows how politicians — are you listening Andrew Gillum and Barack Obama? -- exploited the ensuing racial divisions to further their political goals. The gratuitous anger the media and political class stoked throughout this case led to the creation of Black Lives Matter, the parallel Ferguson hoax, and a crime wave that that has devastated black America."

Meh, I already know how it ends. They blame the Peruvian guy for the whole thing. The Country burns and then the country elects a game show host to wreck the economy even worse.

At this point, I doubt anyone with anywhere close to an objective view of the "Culture War' can be surprised at the abject mendacity, deceit and pernicious intent of the Main Stream Media, Progressives, the Local and Deep State Government and corrupt, lying politicians who will destroy anyone and anything in their psychotic quest for power.

This film, which exposes especially the main witness, Rachael Jentel as a complete concocted out of whole cloth fraud, is the quintessential expose for not just the crimes committed against G Zimmerman, but the extent that these corrupt, necrotic Fascists will go to attain power.

^^^^Chucks right on the Money and he knows what time it is! @8:22 on the other hand would be lucky if he knew what month he's in, let alone what day or time it is. Just shuffling his feet with an up and down nod slobbering and agreeing with our Deep State MsM and Pedowood Progressives....kinda sad.

Don't normally buy into cashill's stuff but on this he's 100 correct. There was a lot of lying going on in this case and it always seemed like a plot to take back the house and senate in 2012. It mostly backfired and probably paved the way for Trump.

Of course it was ALL....POLITICAL... This was NEVER about black lives mattering.... Ask yourself WHERE did the LEADERSHIP of BLM go after Obama left office...? Did blacks stop getting shot...? What happened to the ANGRY STUDENTS from MU...???!! You remember their TENT CITY that TARNISHED THE IMAGE of that formerly GREAT University. What happened to THE WOMENS MOVEMENT LEADERSHIP...?!! Do women no longer have issues in this society...? This has ALWAYS been about a PROGRESSIVE MOVEMENT period. There were a lot of ‘followers’ of these groups that REALLY thought they were fighting for a better society and making a difference. They got HAD. Ps. Pink pussy hats are in the Garage Sales now...

Investigating the truth has become the alt-right...remember that.

Chicken and the egg argument. Of course the left exploited it for political gain. Hasn't the right done the same thing?

As for the accusations about false witness, I might check out the documentary but blaming racial divisions on progressives is a classic trick when conservatives haven't done much to make things better.

Actually, this documentary could be powerful to expose political lies so often mistaken for truth.

"exploited racial divisions for political gain"
sounds like a republican

The Trayvon lie pales in contrast to the narrative of that Ferguson hero Michael Brown.
And an entire victimization empire has been built on it.
Built and financed on an ongoing never-ending falsehood.
Made clear to anyone who ever read the FBI report.
When the FBI was part of an Obama Justice Department headed up by Eric Holder.
Too bad there aren't any serious objective investigative reporters.