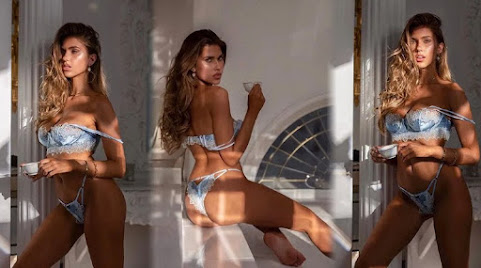 Hottie Kara is only 25 but in a recent promo post she partakes in an old school "tea time" tradition in her skivvies and inspires this morning pop culture peek:

Telegraph: Green tea may hold the answer to rise of drug-resistant superbugs

Closer to home, were take a sip of these somewhat nicer news links for right now . . .

This report, filed by Kevin Collison in CityScene KC last night, represents the transcript of the outgoing City Manager's remarks to the Downtown Office Summit on Wednesday afternoon. Troy Schulte announced on Tuesday that he will retire from his leadership role on Feb. 29, 2020. Downtown Office Summit - Sept.

Try not to cry. Try not to lose it. Your biggest cheerleaders are back in Kansas City! New episodes of Queer Eye arrive July 19. Jonathan Van Ness was having a late breakfast at the Empire Diner, around the corner from his one-bedroom apartment in the Chelsea neighborhood of Manhattan.


Panel: More work to be done between police, community

41 Action News anchor Kevin Holmes met in a Kansas City, Missouri barbershop to hear from a group of men working to make Kansas City a better - and safer - community. Kevin has held a and since then who share the same goals.

AND HE EXPECTS IT TO BE THE BEST PERFORMANCE YET, BECAUSE HE'S IN FRONT OF A HOME CROWD. ♪ REPORTER: WHEN THE CURTAIN OPENS AT STARLIGHT, ONE OF THE STARS IS SURE TO BE A CROWD FAVORITE BECAUSE HE'S FROM KANSAS CITY. DANIEL BEEMAN PLAYS CORNELIUS AND IS PROUD TO SEE HIS NAME ON THE DRESSING ROOM DOOR.


By The Numbers: PorchFestKC 2019 - In Kansas City

After a one-year hiatus, the original PorchFestKC is back on Saturday, October 12th-and back with a vengeance. The local porch-centric musical festival event is touting "more bands than ever, neighborhoods, porch-hosts, and key partnerships," says event organizer Kathryn Golden. "I'm excited to see what might be!"

NICK: THERE IS ANOTHER RISK OF SEVERE WEATHER FRIDAY EVENING AND NIGHT. A COLD FRONT. FIRST ALERT NINE-DAY, FOCUSED ON THE WEEKEND. THAT FRONT, FRIDAY EVENING, SUNSET, THUNDERSTORMS COULD LIGHT UP THAT FRONT. DAMAGING WIND, LARGE HAIL. BRIEF TORNADO POSSIBLE BUT THE MORE LIKELY SEVERE THREAT WILL BE WIND AND HAIL.

When Troy and Slie's debt debacle sinks the KCMO taxpayers, Troy will be on the farm living off a generous City pension check!!

TOP PHOTO -- HER CUPS RUNNETH OVER

As my English nanny was educated at an all-female college, our personal tea time was initially a case of WEDGWOOD!!!

I was going for "Tease for two".

Erik Dickinson: “What we need in Kansas City… people outside the urban core to come back and give their time, talent and treasure. We need more people to volunteer.”
They want no responsibility for what is happening in their neighborhoods. This group of people are nothing more than takers as indicated by Eric's comment. What they need is to get involved in their own community and be responsible.

The US already has socialism.

And the US has two kinds...
the minor one that provides a small amount of health care and financial security to the elderly and disabled,
and of course the MAJOR ONE that keeps Corporate shareholders and executives happy and gives them job security and insurance against any consequences of their greed, mistakes, and general incompetence.

9:50
You're correct, these folks don't look in the mirror and accept responsibility for what is and HAS BEEN going on for years in the Urban core.

Not too push the conversations above off track, but holy shit, did you watch the autism video? Bleach......she's giving him a form of bleach. It appears it works but what will the side effects be down the line?

Here is my Tribute To Troy

Fuck You and don't let the door hit your fat ass as you exit the place.

Please keep those queer eye faggots out of town.

Grip said I was stupid.