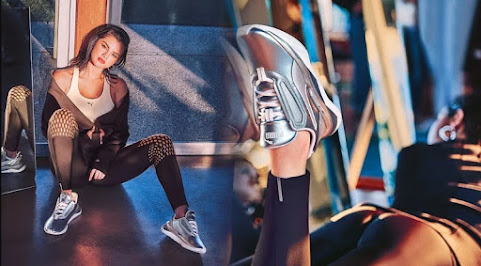 The 27-year-old music star social media hottie continues to try and move away from her wholesome image to no avail . . . And she inspires our morning pop culture peek:

Daily Mail: Go get 'em! Selena Gomez chills out and writes music in 80s-inspired Puma campaign for her 'go-to' sneakers, which she says are made to help her 'chase her dreams'

Fox News: Selena Gomez speaks out about the 'scariest' moment of her life, how she overcame anxiety, depression

Inc: Millennials Are the Loneliest Generation, a Survey Shows

Closer to home, here are the worthwhile nicer news links to start our morning . . .


Symphony, Middle of the Map, Quixotic Sensatia to light up the Big Town

An all-new Quixotic residency at its new theater in Crown Center; the Middle of the Map Fest; and the Symphony's 15-year celebration of Michael Stern as its acclaimed musical director top an exhilarating list of arts & entertainment thrills this week in Downtown KC. Roll the highlight reel for what's cooking - Monday to Sunday, Sep.

KANSAS CITY, KS (KCTV) -- Three years after the Indian Springs Mall was demolished, the site may soon find new purpose as part of a $140 million project. Scavuzzo's Food Service says it is committed to a four-phase process on the land, including a new distribution center and eventually an office building, retail shops and commercial buildings.


Zero Reasons Why awareness campaign expanding across the metro

KANSAS CITY, Mo. - A movement that started in Johnson County is expanding - giving teens across the Kansas City Metro zero reasons to consider suicide. About 50 people rallied at the J.C. Nichols fountain on the Plaza Sunday afternoon, carrying yellow signs noting the lack of reasons anyone has to commit suicide.


Royals fan lost over $1 million in collectibles to flash flood

HARRISONVILLE, Mo. - The National Weather Service predicted Harrisonville would see the largest flash flood on Saturday and locals told FOX4, they were right. "We had over four inches of rain maybe even five," said Harrisonville's public information officer, Daniel Barnett. "It was a ton of rain in a small amount of time which made things really difficult."


Five things we learned as the Chiefs defeated the Lions

The Here are five things we learned from the come-from-behind victory: Kansas City Chiefs advanced to 4-0 on the season after defeating the Detroit Lions at Ford Field 34-30 on Sunday afternoon. This past week, I fielded a request from a public relations writer at the University of Cincinnati about Travis Kelce.

Executive Chef Laura Comer has created a new seasonal three-course menu for The Dining Experience at the Kauffman Center for the Performing Arts. Check out the new options as well as a few photos of the restaurant's space in the Founders' Lounge.

OVER THE WHEEL. CODY: GIVE US SOMETHING TO -- GIVE US SOMETHING GOOD TO THINK ABOUT. NICK: IF YOU LIKE FALL WEATHER, IT IS ON ITS WAY. THIS MAY BE SUMMER'S LAST GO OF IT TODAY AND TOMORROW. FALL-LIKE CONDITIONS FOR THE WEEKEND WILL LAST UNTIL NEXT WEEK HERE ON THE FIRST ALERT NINE-DAY.

KC isn't much fun when violence rules the day.

Sorry but wiser people stay in the suburbs.

^^nah geezer, we're not scared like you. Lived here my whole life. Never had any problems. You stay in Frogville please. It's better that way chicken-shit.

^^^Actually he's confined in a mental ward. Mom wants nothing to do with him.