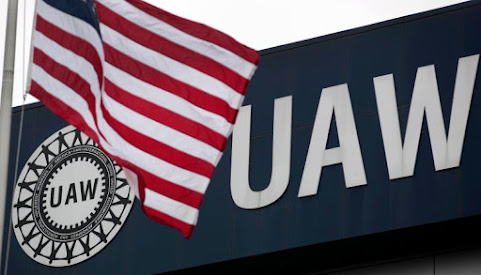 The most important issue confronting the nation and Kansas City right now is labor push back against corporate America as a recession looms.

To wit we have a few news items to preview this morning . . .

Mayor Q is on board along with a few other Council members, Jackson County politicos and quite a few local politicos who take a great deal of union money for their campaigns.

On the opposite side of the spectrum . . .

MEXICAN TKC READERS TELL US THAT GM PRODUCTION HAS RAMPED UP OVER THE PAST MONTH WITH MORE WORKERS HIRED ON OVER THE WEEKEND!!!

Ramos Arizpe Assembly in Coahuila, Mexico is making those hideous new Chevy Blazers at break-neck speed and won't be slowing down any time soon.

Reality Check: GM is an international company and the strike will hurt American workers but won't slow down production across the globe which, ironically, proves to be the more reliable profit center for the company.

Finally, A TOP ECHELON KC INSIDER shares this analysis that offers a glimpse at the future . . .

THE UAW STRIKE FORESHADOWS UPCOMING HARD TIMES FOR ALL AMERICAN WORKERS AS AUTOMATION, OUTSOURCING AND CORPORATE GREED THREATEN THE WORKING-CLASS!!!

"It's easy to be a reactionary against unions but this strike might be the canary in the coalmine for the American economy. Sure, it's hard to feel sorry for people making $30-an-hour but their complaints about cutbacks, no raises and fewer benefits are common among all workers. UAW is simply joining the club of MOST AMERICANS WHO HAVE BEEN LEFT BEHIND DESPITE THE PRESIDENT TRUMP BULL MARKET. So this strike is worth watching because workers across the nation will get a chance to see if there's any support for management to raise wages and benefits while their profits are rising."

Accordingly, here are some worthwhile links on the topic . . .


'Pray for us,' UAW hourly worker urges on Day 1 of the GM strike

CLOSE FLINT - The wife of a General Motors employee posted on her private Facebook page Sunday, "Well, I can only pray this strike is short." Mary Jo Burchart of Lake Orion is one of tens of thousands of family members watching contract negotiations between the UAW and General Motors with caution and hope.

KANSAS CITY, Kan. -- Roughly 49,000 workers at General Motors plants in the U.S. plan to go on strike just before midnight Sunday, but talks between the United Auto Workers and the automaker will resume.


On Strike! UAW workers walk out on GM

The United Auto Workers went on a nationwide strike against General Motors on Sunday night after contract talks broke off Sunday. It is the first strike against GM in 12 years. Talks will resume Monday morning. Union officials say both sides are far apart in the talks, while GM says it has made significant offers.

By CNN Business Published 6:28 AM ET, Mon September 16, 2019 Workers walk out: The United Auto Workers union went on strike against General Motors late Sunday. It's the biggest strike by any labor organization in the United States since 2007. GM, America's largest automaker, has 46,000 UAW members on its payroll.

The strike, depending on its length, could easily cost GM hundreds of millions of dollars. The last time the union declared a strike at GM was in 2007. The two-day work stoppage was estimated to have cost the Detroit automaker more than $300 million a day.

Detroit - Some 46,000 members of the United Auto Workers went on strike early Monday, walking off General Motors factory floors and setting up picket lines as their midnight strike deadline came and went. Workers shut down 33 manufacturing plants in nine states across the U.S. as well as 22 parts distribution warehouses.


Teamsters refusing to transport GM vehicles in solidarity with UAW

The Teamsters won't be transporting General Motors vehicles during the United Auto Workers' strike. International Brotherhood of Teamsters General President Jim Hoffa said on Sunday that its members will stand in solidarity with the UAW and honor its picket lines as the union begins a strike against GM at midnight.

Strike will be over in a month when management doesn't give in and most of the workers have already run through their savings. Not a fan of GM but this one is an easy win.

At least robots aren’t out in the parking lot drinking and doing drugs on their break.

But your property values just went up!

Where are Sly, Lucas, and the rest of the politicos?
Man the barricades!
Grab your bullhorn!
Tell other people how to spend their money!
Get on local TV shows!
Not like these folks to miss an opportunity.

Lots of threats about "automation" but it's funny that those robots don't defend very well against workers and consumers unplugging or destroying them.

New upgrades will be armed with lasers. BTW, most automation is softwarebased. Dumbass.

Wall Street is NOT Main Street.

Holy Shit, I agree with Chuck.

The Ford vs. Chevy war above is epic.

UAW is going to get a quick lesson about "internet news".
3 days max and the news has moved on. By 9/20 no one will give a shit about this strike any more.
That is why they will settle. They can't keep the attention on them.

^^^ They aren't doing this to get the attention of a bunch of fat asses sitting around in their underwear surfing the web.

GENERAL MOTORS IS GOING TO GO BANKRUPT BECAUSE OF THE SOCIALIST RUNNING IT!

Harley is the same way and Boeing,ford and dodge are also

Dodge isn’t even owned by the Americans.Italy owns it

Fuck the unions and their free fucking health care until the day they die.

Trump's economy! We are winning so hard!!! What a failure.

948 my business is doing great your a fucking idiot

If the economy is so bad why are the unions wanting more! 948 is a stupid mommas boy typing from the basement with his dick in his hand like every other liberal

The average UAW worker makes $90K a year. The average teacher $32K. Cops average $44K I am not sympathetic.

@10:00AM-You have a business and you don't even know when to use "your" and 'you're"???? Doubtful. Busted! Now go back to stealing copper wire you fucking liar! You played yourself! Fucking simp.

Eight years of economic recovery under Obama slammed to a stop as soon as the GOP passed their mandatory Tax Cut for the Rich, so what did anyone expect?

The most amusing thing about this shit is that some of the stupid assholes in the UAW actually voted for Trump!

Wages ARE NOT stagnant. According to the NY Times (dated Sept. 6th),
wages rose at a healthy clip in August and unemployment is at a 50 year low.

^^^ Only if you restrict your counting the "unemployed" that meet the Administration's revised standards - by the traditional count it's 12%!

10:33 obviously knows nothing and I mean nothing about economics. Unemployment, housing, the stock market, wages, the GNP and the GDP
are all better with Trump as President. Plus, he or she has disdain
for working folks by calling them stupid assholes which is another reason
working people don't want to vote for snowflake liberals.

10:33 undoubtedly hopes for a recession. Liberals like to bathe in misery so they can whine about it.

^^Ugh huh and remember shit-flake Conservatives love to cause that misery. They have done it every time they've been elected. Look it up. Now make me a sandwich you fucking shit-flake!

Above excerpt from the headline is spot on.

I suspect there are thousands who are willing to work for a paltry $240 a day / $1200 a week along with good medical and other perks. F--k the UAW.

Fuck you UAW, the Japs will gladly make me a car while you sit on your lazy assess. Your going to strike yourselves out of a job.

^^and yet Unions are responsible for almost everything your worthless, taking ass takes for granted like 8-hour days, medical benefits, and a fucking living wage you fucking tool. Weird.

Well, someone is transporting GM vehicles. Just saw a truck full of Corvettes on 71Hwy this morning.

Chimpy! You live in a cage and taxpayers pay for yourbananas!

^^^ and yet the UAW's pension is essentially backstopped by the U.S. tax payer.
Look up Pension Guarantee Corp. of America.
Maybe you should fast forward to the present day.

12:37, self employed work my ass off and have supported myself without you taking my paycheck for your bullshit causes. At least now you’ll have time to suck that bag of dicks. Oh hey there’s a Kia nice looking car!

^^^^^Have you supported yourself by stealing copper wire on your way to flipping burgers?

And I love my Kia!

@1:05-I guess you could say that stealing copper is "self-employed." I wouldn't, but a talking ape like you would.

Truly amazing to watch, how ignorant can UAW workers be. The party you support is proposing killing fossil fuels and moving away from individual transportation. The T.V. You are watching while on paid vacation used to be made in America and so did your computer. Both gone now, sure your UAW will put up a fight initially but they don’t really care. How much does the UAW president make taking your money. Your industry is dead either by you forcing higher cost or the govt you vote for killing it. Good luck put I’d go to plumber school while your off.

I just looked up the UAW financials, wow. The UAW took over 200 million in dues from its members. Over 400 union staff members make over 100,000 not including trips and expenses. The UAW is living high on the workers dues! It’s organized corruption, you don’t have to believe me just read where the money goes it’s staggering.

^^We don't believe you. You're here. You failed.

in return for its support of LBJ

I see no one is defending from 3:30, interesting?

Next, teacher strikes, coming soon, to a city near you. Don't want more higher taxes? That 's okay, they'll start striking yearly. Get her done.

I'm all for Unions UNTIL the Bastards JUMPed in BED with the GOVernment..... They can all get on their knees and tell regular folks their sorry. A bunch of corrupt greedy no morals people. The teachers get everything they deserve for voting Democrat under obambams new rules for the fellows and lovely ladies. Good Luck