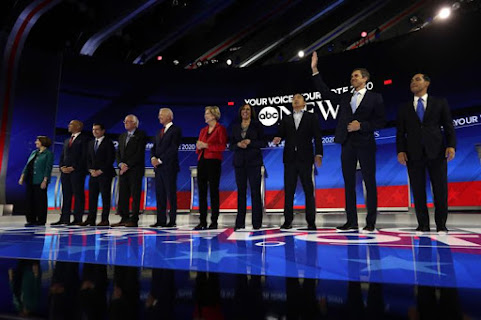 Slate: What Twitter Has to Say About the Democratic Debate

Examiner: Biden and Latinos -- 'Why should Latinos trust you?' Jorge Ramos asks

CNN: Trump - I respect all the Democratic debate candidates

Closer to home, here are the highlights of the news cycle . . .

KANSAS CITY, Mo. - Wesley Hamilton wants you to know he is more than his disability. And Mark Launiu says he represents more than fashion. Hamilton, executive director of Disabled But Not Really, and Launiu, who co-founded the MADE MOBB clothing company, have teamed up in a new anti-violence campaign focused on helping people across Kansas City, Missouri, empower and uplift one another.

David Fawcett, a therapist who works with people recovering from crystal meth addiction, talks about the purity of the drug now available and the effects it has on its users. A Mexican man who illegally entered the United States at least seven times is headed to prison after pleading guilty Thursday to drug trafficking charges in Missouri, according to federal prosecutors.

JACKSON COUNTY, MO (KCTV) - On Thursday, an Independence man was found guilty of murdering his mother's fiancé. A jury found 28-year-old William M. Miller-Kirkland guilty of first-degree murder and armed criminal action. He will be sentenced on Oct. 25. According to court records, Independence police went to the 1400 block of Osage St.

SPRING HILL, KS (KCTV) -- A growing number of farmers are filing for bankruptcy and the state of Kansas has been especially hard hit. Hundreds of farms are declaring bankruptcy and there are a lot of factors that came together at once and caused that to happen.

ST. LOUIS - Two cases of lung illness associated with the use of e-cigarettes have been reported in Missouri over the past two weeks, and seven more possible cases are under investigation, state health department officials said in a news release Thursday.


Tyreek Hill is going to be out for a while...so now what?

Kansas City Chiefs wide receiver Tyreek Hill left the Week 1 game against the Jacksonville Jaguars early with a sternoclavicular joint injury and is expected to miss four to six weeks, according to a report from NFL Network's Ian Rapoport .

Yet Another Massive KCMO Traffic Tragedy

KANSAS CITY, Mo. -- Kansas City police are investigating a bus crash that sent seven people to the hospital Thursday evening. The crash happened near 39th and Prospect just after 5 p.m. Police say the driver of a gray SUV was headed west on 39th when they hit the bus right at the intersection.

Frank Mackey Jr is an idiot. He should have listened to his Dad on how to be a farmer.

(L to R)
1) A closeted lesbian Jew.
2) A closeted black man who pretends he's from the 'hood.
3) An out homosexual (Pete Butt).
4) An elderly Socialist who's in it for the money!
5) An elderly dementia patient who first ran for President in 1988.
6) An elderly woman who claimed to be Native American to get a diversity-program job at Harvard.
7) An opportunist who slept her way into California politics; her mother is from India and her father from Jamaica. Father's family owned slaves.
8) An Asian dry-cleaner who's good at math.
9) Irish-American WASP who pretends to be Latino.
10) Latino bastard child of La Raza activist parents!!!

^^^ And they all could beat the game show host russian spy. Good times!

...to the losers' column! Just like Hilly did! Her losing campaign showcased the lying crook to be remembered as the sniper-fire liar, philanderer enabler, Billy's victims blamer, classified documents exposer, gov't records destroyer, family foundation fraudster, Steele dossier financier/FISA fabricator, the REAL puppet for Putin, pal of convicted pedo Epstein, and Bernie briber to get him to abandon the nomination.

The problem with farming is food prices are almost the same as they were 20 years ago. $1.00 for a dozen eggs or a loaf of bread? We should be paying more for food and those prices should be funneling down to our farmers. Can you imagine going 20 years without a pay raise but the prices for everything else keeps going up (look at the price of new farm equipment!)

Yeah, the farmin' thing is tough. A local dairy farmer who sold commercially to one of the big local coop providers also shut down his operation and is sellin' off the herd. Being a farmer is rough. How many millionaires or multi-millionaires couldn't buy a $10k used truck with ca$h? Land rich, cash poor.

8:48 - So are you espousing the idea of artificially manipulating the prices of food? You do know there is a market (futures and whatnot) for farming goods. It's driven by supply and demand. Not too mention, farming is one of the most subsidized industries there is. You want to talk about socialism.

I knew a few farm kids in college. Their families did just fine. You wouldn't know it because they saved money for leaner times, but they weren't poor. The reason bankruptcies are up is because of Trump. Plain and simple. Someone is losing in this tariff war and it's farmers. They have plenty of supply, the demand is just gone....again, thanks to Trump.

Cheap priced bread and eggs=mass produced! Treat yourself and family to the GOOD stuff=farmer's markets and specialty sections in the grocery! Try making your bread! said...

8:48--Yeah, maybe food prices should rise a bit during the times that fuel, labor, and equipment costs are high enough to justify it. Many food producers sell huge quantities to gummint programs--schools, prisons, military installations, dining services for gummint personnel/elected reps in DC, low-income commodity programs within the US and beyond, and disaster response agencies. Very many agricultural businesses get subsidies, tax breaks, and special considerations for costs of insurance and lending.

The savvy small, and many wise mid-sized farms, are operated by those who have another source, or two, of income. Equipment and methods have streamlined production and chores to the benefit of ag producers to be able to have time available for other employment. And, equipment and supplies have become costly enough, that an added revenue stream is desirable, or, actually necessary in efforts to manage debt.