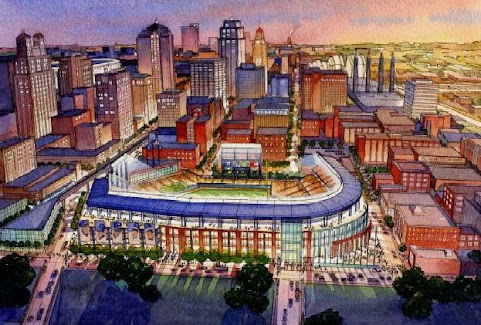 Just as we predicted, the downtown stadium isn't an idea, it's an inevitability.

The only real debate is where to stick it.

And so, let's start the conversation with real talk that only our blog community can handle . . .

TOP ECHELON KANSAS CITY INSIDER: "NOBODY WANTS TO GO TO THE GHETTO TO WATCH BASEBALL!!!"

And so, once again the sketchy "East Crossroads" plan is once again in jeopardy as "investing" a half-a-billion dollars near the 18th & Vine districts is now hotly debated behind the scenes whilst development execs are attempting to "expand" the idea of what City Hall leaders think of as "Downtown" when offering up new suggestions for the stadium.

Where are they going to stick it?

To Jackson County taxpayers as always.


They can stick it up their ass.

The only people that want a stadium downtown are homosexuals. We have way too many homosexuals.

New KCI...New Broadway Bridge...closed North Loop (flowing River Market into DT and providing parking for Stadium)...New Ballpark (at 6th and Wyandotte) on Street Line. Book it! A whole new Gateway into the best Mid-Major City in America. Screw the naysayers...DO IT!

"NOBODY WANTS TO GO TO THE GHETTO TO WATCH BASEBALL!!!"

Truer words have never been spoken.

I agree, how about QL sticking it p his ass.

Please don't show your ignorance by using racist overtones in discussions. Is building a baseball stadium downtown good for the future development and growth of the city? Yes. Do developers make money by taking financial risks and lobbying leaders for tax incentives? Yes. Is that a bad thing? Not necessarily. Can the city afford another huge development project at this time? NO Will the citizens approve a tax increase to pay for it? Probably not, unless the vote is rigged.

They only count the yes votes

Fuckin no on moving the stadium. Second, White people, you already drive to the Ghetto to watch baseball and football. Both are it the 3rd District and while it’s on the urban fringe of the City and so-called Ghetto, plenty of honky’s come every day to root for a team that have nothing to do with their lifestyle. Walking around saying you’re born Royal when you’re from Overland Park, Wichita, Lenexa, Gardner, KCK, Lansing, Leavenworth, Tonganoxie, Bonner Springs or anywhere in Kansas, Kansas, Nebraska, Ohio, Iowa, etc. is like White people calling themselves Black people. It’s cultural appropriation at best. As long as Kansas City, Missouri taxpayers are paying for this bullshit in one form or another, the answers is a resounding NOOOOOOO. Move the team to some other City/State - don’t care. I am NOT willing to pay for anymore entertainment districts to entertain White people. Fuck em!

Amazing your brain still functions 8:27 AM.

If the City would use eminent domain to seize and bulldoze flat a portion of the East Side, say from Independence Avenue to 98th Street, Troost to I-435, there might be enough space for a Baseball Stadium, and there would definitely be a great improvement in the City overall.

This downtown baseball stadium talk is all the sports talk radio jagoffs that think they know sports so much better than anyone else. They talk all day long on the radio about how great a downtown stadium would be and how great it would enhance the city and how great the fans would have it to have the stadium surrounded by Cordish over priced and bigoted restaurants. And crap, it would only cost a billion dollars! The fact of the matter is that the Truman Sports complex is still the greatest sports venue this city/county/area could ever afford. I know it's been ten years since the remodel but how long ago did you remodel your own home? Ever? What, NEVER? But a ten year multi-million dollar reno isn't good enough for those in the sports talk business? I'll wait to see how much skin they actually put in the game out of their own pockets first.

I'm in favor of a downtown stadium if it takes the place of city hall.

The original baseball stadium was in the hood and it wasn't safe 50 years ago... they couldn't get it out of there fast enough.

No one wants to go to the hood.

Building nice things in the hood isn't going to make the hood any better and the nice things won't be nice for long.

Isn't there a consulting agency that can tell the city how to legally rob and rip off the taxpayers and put them and their kids into permanent debt that can never be paid back for this?

Sure move it downtown so people can get shot and killed while watching the game. Better yet move it to the plaza.

No chance the stadium is moving until at least 2035. The taxpayers paid for those renovations at the K. That is way too sweet of a deal for the new owner. It won't be happening. Don't kid yourselves. I personally prefer it at the K anyways. Downtown KC is a S hole full of bums and kids who like to shoot off guns. KC police are a joke when it comes to dealing with his sort of thing.

Royals will be in Vegas very soon

Putting it on the east side would be stupid. Baseball stadiums are required to face east so it'd be over looking nothing. If we're going downtown the skyline should be the backdrop

NOT even April 1st yet all these jokes Can you image someone walking from a Hotel to the Ball Park ?

And so are "Top Echelon KC Insiders".

I don't want to go to 18th & Vine. Won't go there for a royals game. NO THANKS. I'm not top echelon but I am a 20 year royals season ticket holder.

^^^So? If they build a new stadium, they will have a ton of new season ticket holders. That’s reality and this is happening. Deal with it!

Great. Invest a billion in baseball, a sport on the decline big time.

First of all nobody with money is going to want to come to a stadium anywhere near the 'hood because the place will be a magnet for negroes who beg - which is all of them - and they'll bring their robbing, raping and stealing (all negro vocations) with them for the ride, and they'll be down there selling peanuts infested with their diseases and their fake tickets printed on computers and oh my God the smell those animals put off is horrible!

So, no. Build it in Grain Valley.

@ 355, so you want to build it in WYCO say atop Strawberry hill? Great view of the downtown area east of there.

the baseball stadium stays where it is and y'all can scoot, walk, or go-cart ur drunk endomorphic asses on a NEW auto-free route from Kauffman stadium 2 knucklheads, b/c that's what ya already do anyways. Ur buddies can pick you up on the other side.
*9 miles on a treadmill or bike at planet fitness, and the machine shuts down.

credit on ur transportation card is available cleaning brush at berkley riverfront park beneath the bridge, and involvement in the NEW meta-analysis of turkey creek.

Only Kansas City could screw up a downtown stadium by putting it on the crime-infested side of town to appear diverse and inclusive. Maybe we should have built the new airport at 30th and Cleveland?