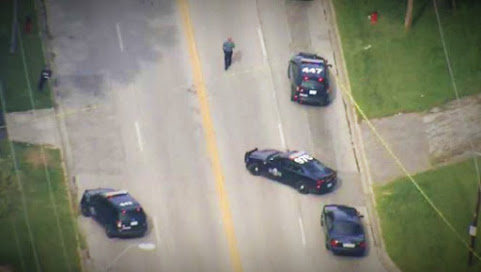 Despite a myriad of anti-crime efforts, increased reward for murder tips and a bevy of community outreach . . . The quotient of local killing continues.

Today's homicide brings the uptick in KCMO killing to nearly 12% over last year as this cowtown counts its 104th homicide so far this year compared to 93 at this date on the calender last year.

KCPD: The shooting started at 77th Street and Blue Ridge Boulevard and continued for the three blocks.

KSHB: Two people in a black Ford Mustang were shot, and the car went off of the road and into a driveway where it struck a parked car.

$25K to be had. Claim it and take killers off the street.

Seems like there's a shooting on this street nearly every day. A good spot for a police outpost or more patrols.

^^^^^ Yes, dickhead. More police on KC streets is what neighborhoods throughout the city have been asking for over the past two years. Just get into town. It's an investment in resources that they keep promising year over year and incrementally when it's obvious we need more cops on the streets NOW.

Are the suspects white?

Nope. We have a streetcar to pay for. Oh, and and a new stadium. Also a new airport, and...

Can we shoot at people shooting at people?

I really do think that we need an honest evaluation of how the tips program worked after this summer. I know that everything needs to be given time to prove effective but if anything I've seen the homicide count get worse ever since the tip was announced. The only thing we've seen is more money withdrawn from the general fund in order to finance a program that is based on faulty logic and not much evidence. If we do break the homicide record this year it's time to reconsider subsidizing the criminal class.

So if you receive money for a tip the catches a killer your supposed to remain anonymous right? Did these fools forget that you more than likely have to go to court as a witness.

^^^^ Good point, there has always been a lot of debate if anonymous tips are really anonymous.

Raytown is just glad is wasnt another street over.

Hey Steve @7:30 you forgot about those bike lanes and those Green Line walking trails. They call that Progress. There's so much more important things to get done when your a progressive, so please keep them votes coming in for that Democratic Pie in the Sky Party. Don't sweet the small stuff Go Bernie !