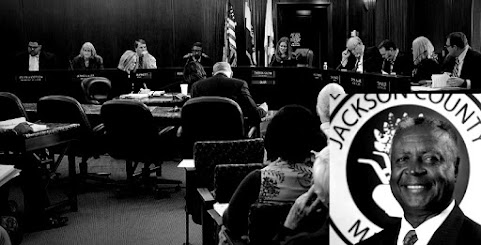 Our blog community previewed the prevailing sentiment this morning and now it's news fact.

The prevailing sentiment at the Courthouse: Exec Frank White is the odd man out and remains basically powerless as the Legislature is united against him and has SMACKED DOWN nearly every idea with his name on it. This is just the latest in a long running line of insults. In this instance, we can't help but note the representative body is correct inasmuch as the smallish "tax cut" was mostly a publicity stunt which didn't help to solve the very real crisis facing local homeowners.

Check the round-up for an inevitability and a Sunday Stunt from the current administration SHUT DOWN!!!

Meanwhile, progress on the OLD SCHOOL HAZARDOUS JAIL is on the back-burner whilst this tax kerfuffle continues . . .

Q and Frank are in Nashville attending a leadership conference.

^^^^ Damn good call. Just think of all the useful things they must be learning!

county can send an appraiser to each and every property. Eliminate the combat tax. Fire Frank,Gail and Vincent.

Frank is a coward.

Ah that explains his sell your house or take out a loan to pay your taxes deal.

Congress was smart to reject him but we are stuck with him unfortunately.

Frank's plan didn't leave room for the "special arrangements" that each and every County Legislator hands out to their biggest donors. Doomed from the start.

Just love it when demmocrims eat each other alive! Man they’re pathetic!

I feel bad for the people who keep voting these losers into office, and they will defend their stupidity to the death! This is some funny shit really! Hahaha!

These crooked politicians are picking the voters pockets and they are too stupid to know it! God you people are morons! Hahaha!

Myst be one of the perks for being head of Jackson County collections.

Jackson County taxpayers are about to get fucked over big time.

11:30 PM Yes they are, not only with the county tax but if your property value went up so will all the other taxes on you tax bill. Now we're talking real money that's not even on the taxpayers radar. Hey look at this hand! Ignore the other hand diddling you ass on the way out of your pocket.

The legislators might have proposals of their own, but some of them are way too busy spending their time on impeaching the president or global warming.
How do these people make believe they can provide oversight to programs that they appear to know so little about?