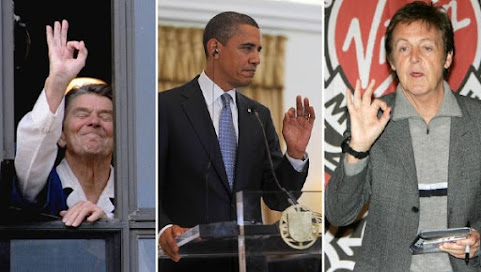 Sign of the times worthy of consideration this morning . . .

'OK' is now a hate symbol, the ADL says

After the jump we're sharing a bevy of local news links that are worthwhile and shed light on recent events in and around Kansas City but didn't quite fit anywhere else . . .

The landsharks are circling and eight hungry tech founders are ready to sell their ideas at the fourth annual, invite-only Pure Pitch Rally, the early-stage funding platform announced Wednesday.


Business incubator to open on KCMO's Westside in May 2020

KANSAS CITY, Mo. - Excitement is starting to outweigh anxiety in a Kansas City, Missouri, neighborhood. People living in the city's predominantly Hispanic Westside have seen businesses move in, leading to fears of change pushing longtime residents out. To make sure everyone in the neighborhood has a chance to succeed, a group is building a business incubator.

City inspectors ordered the old Trinity Lutheran Hospital at 30th and Baltimore streets boarded up this week -- for the sixth time in six months. The old hospital is connected to the Park Reserve condos."Who wants to live next to this?" Park Reserve resident Joe Heyen said, pointing to a mess near his condo.

BLUE SPRINGS, Mo. - The YMCA of Greater Kansas City announced Wednesday that its location near Blue Springs South High School will close at the end of October. The YMCA, which opened the Blue Springs facility in 1999, has served as the home for the high school's swimming and diving team for meets and practices.


Last man sentenced in robbery that led to officer's shooting

KANSAS CITY, Mo. -- Kansas City Royals Manager Ned Yost announced Monday that he will retire effective this Sunday after the 2019 season finale against the Minnesota Twins. So on Tuesday the all-time winningest manager in franchise history, with 744 wins, spoke to reporters about the decision and the 2015 World Series.

The state's four congressional representatives have weighed in after this week's announcement from Speaker Nancy Pelosi that the House of Representatives will move forward with an impeachment inquiry of President Donald Trump.


A Year After Success In The Major League Soccer Playoffs, Sporting KC Fails To Qualify

Sporting Kansas City's 2019 season started with a bang: Reaching the semifinals of the CONCACAF Champions League tournament, the most prestigious soccer club tournament in North America. But it ended with a thud.


A dream come true at the Kansas City Fashion Week

An alarm rings, marking the hour at 9 a.m. A shower turns on. A red-haired model rids herself of any moisturizer and makeup. She ices her face. A little past noon, she breathes in the warm, summer air, and makes her way across Kansas City to Union Station.

The first rule of business is location, location, location. While the state of Missouri has yet to issue any licenses for medical marijuana businesses, it hasn't stopped those hoping to get in on the ground floor from trying to find real estate - and jumping through hoops in the process.

The Clubhouse Experience is teeing up its Friday debut in downtown Kansas City, giving patrons a "food first" experience that's blended with entertainment. The name itself packs meaning. The clubhouse, regardless of sport, is the "social epicenter of where people gather," said Jason Townsend, co-founder of The Clubhouse and a veteran lifestyle developer.

KANSAS CITY, Mo. - With thunderstorms in the forecast Friday night, several area school districts announced Wednesday that they are moving football games to Thursday. The Independence School District announced that its games originally scheduled for 7 p.m. on Friday will be moved up one day.

No Turning Back For KC QB


Patrick Mahomes doesn't know the meaning of the word "regress"

It was only a matter of time. On Wednesday, FiveThirtyEight.com's Michael Salfino published an article entitled Quarterbacks Usually Regress After Historic Seasons. Not Patrick Mahomes . The statistics geeks at FiveThirtyEight - who write about all kinds of sports topics when they're not crunching election numbers - were bound to notice what's been going on with the Kansas City Chiefs and their your quarterback Patrick Mahomes.

We're continuing with our "Three Needs" series, in which we take a look at the chief issues to be addressed for clubs that have fallen out of contention. We've already focused on the Mariners, Tigers, White Sox, Marlins, Rangers, Pirates, and Angels.

KANSAS CITY, MO (KCTV) -- People in Kansas City have the chance to view a documentary police and church leaders call "powerful." 'Emanuel' tells the story of the South Carolina church shooting in 2015 that left nine people dead. The documentary travels across the country and with a very special guest.


Equilux to happen Thursday, but what does that mean?

FAIRWAY, KS (KCTV) -- Monday marked the beginning of Fall when the sun's rays were shining directly over the equator, also known as the autumnal equinox. The Autumnal Equinox occurred at 2:50 a.m. local time, but technically speaking, we haven't seen equal hours of daylight and darkness in Kansas City just yet.

Ignore them. If the OK sign makes them feel unsafe, they can crawl into bed, curl into a fetal position and pull the covers over their heads.

One of the most informative documentaries ever made, Defamation (2006) tells you everything you need to know about the ADL. Check it out.

I mean when a bunch of jack booted Nazi cocksucker wanna bes march down a street just putting up an OK symbol for absolutely no reason, I'm gonna say it's a hate symbol.

When Paul McCartney does it in a situation that makes sense, I'm gonna say it's not a hate symbol.

See, was that so hard?

Not racist but that shiz is just funny.

I'm about as far from the alt-Wrong wingnuts as you can get, but I've now declared the "Anti-Defamation League" to be a Terrorist Organization.

Here's a symbol for them, middle finger extended, pointing upward.
|
^^|^)