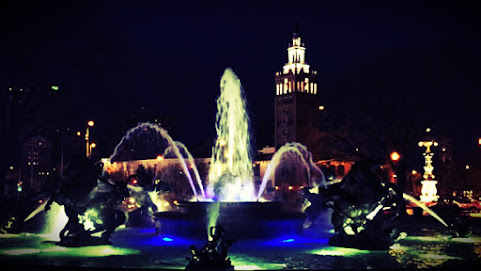 According to the world's most accurate encyclopedia, this longstanding Kansas City entertainment district was established in 1922 by J. C. Nichols and designed architecturally after Seville, Spain, the Plaza comprises high-end retail establishments, restaurants, and entertainment venues, as well as offices.

“People just are not patronizing the Country Club Plaza as they had in the past because of past violence."

This is part of ongoing concern about KC violence and tourism -- Fact is, the Plaza has been hurt more than most with big name retailer departures and more generic offerings now dominating so-called "upscale" fare . . .

Timing of MSM interest in the fate of the Plaza has been horrible and might keep even more visitors at bay for the upcoming art fair this weekend.

5 & the star are about 7 years too late. Basically beyond saving at least for most people. Not worth going down there for most, there are nicer places in the suburbs. Obviously people don't really care about the history of the place. Just nerds who read and write blogs.

He wants cities to be able to pass their own gun laws.

Hey! Remember me?? I was a really cool shopping center for a while and then, well, armies of blacks invaded and before you could say, "No Justice, No Peace!" I turned into a huge empty field. Now Cerner is building where I used to be and all of Cerner's employees are shopping in the Ruskin Heights Shopping Center.

The Plaza will soon be occupied by nail salons, Used Car lots and Liquor Stores advertising specials on Malt Liquor.

The same jungle bunnies that sucked the life out of me, is Vampiring the shit out of the Plaza and everyone knows it and no one has the nerve to say it out loud.

^^^^and yet the Capital Grill expanded into a bigger space, five new restaurants opened, and Nordstrom’s is moving down there. Weird


The plaza has been going down for a few years now, and with the flash mob kids, and idiot liberal protesters, people have just stopped going there. At least decent people have. Can you imagine taking a client out for dinner or business party and having that go on? Once the business and tourism is lost it's very hard to get back and will take years. The Plaza is no place for Nike, forever 21 and the other mall type places we can go to Oak Park, or any suburb for that crap. Even Crown center has hit an all time low. Cheap and tacky. Next we will see the Intercontinental, Raphael, and Cheescake Factory leave, mark my words.

Weirdo, there's nothing unique down there any more, just you and some of your fellow junglebunnies slouching around picking fleas off each other and throwing poo at cars driving by.

Nordstrom's is very close to coming to agreement with Oak Park management on a new lease, and is about to tell KCMO "thanks, but no thanks" - remember that they haven't signed the Letter Of Intent yet.


@ 9:34 Nordstroms, Capitol Grill....ROFL all eating establishments and more mall stores. Two to be exact. Now that's big time. Get a clue and broaden your vocabulary WEIRDO!

I still believe that opening bars and clubs in the 18th & Vine area would creàte a "Blackport", which may attract much of the criminal element, and that would make the established party areas more appealing to out of towners again.

And yet there will be thousands of people down there this weekend as there is Every. Single. Year.

“The world’s most accurate encyclopedia” whose quote opens the article better do some fact-checking. What are the “high-end” retail establishments? Old Navy? Forever 21? Nike? The Plaza they’re describing is, sadly, just a memory now. The architecture and fountains are still beautiful, but the tenants are no longer “high-end.” And while it’s nice to think that maybe Nordstrom will breathe some new life into the place, Saks, Hall’s, and other large department stores couldn’t it’s, so we’ll see.

Crime at City Hall is a symptom as crime in the streets. 2015 was a record sales year for the Plaza. The real estate company took the profits and ran just like every company that gets a TIF or CID option. Now we are seeing corruption not seen since the thirties and somehow the sideshow of street violence creates another smoke screen. The thing about the Unplaza Fair is the City Hall sleaze factor isn't present.

Ppl in the know know there is No reason to take the risk...simple as that.

Funny you mention Oak Park Mall, another location which was taken over by Gangsta' culture ( read Violence ). Which led to Gangsta shooting , robberies, mob attacks and violence on innocent shoppers. You say plaza, I say Oak park .. both have the same actors involved and the same cry of civil rights violation if you attempt to prevent it. Now let's toss in Westport..

Let's be honest and use the word black's rather than violence. At least that's more accurate.

No problem, it has cooled off a little so not too hot to wear the body armor vest to the plaza tonight.