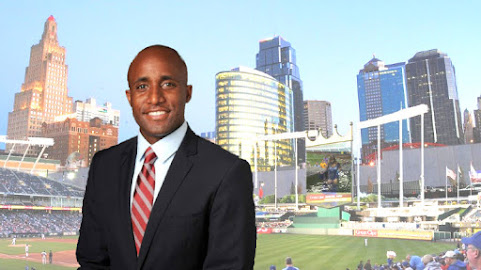 Behind the scenes, the new mayor confronts a serious challenge in selling MASSIVE baseball subsidy amid the Kansas City Royals "first to worst" journey which has betrayed the hopes, dreams and misconceptions of local fanboys.

Sadly, it turns out that "Midwestern values" don't win games . . . Better to have a squad packed with talented and angry Dominican dudes like most big city teams.

Even worse, the market for America's former pastime has tightened up . . .

Even worse, our blog community thinks this move will prove disastrous for the new City Hall honcho . . .

"He'll rationalize it by saying it will economically assist the East-side, complement the youth baseball academy, and continue KC's momentum.

"This will be when everyone verifies that Quinton is little different than most "legacy" politicians."

OUR TKC BLOG COMMUNITY WAS FIRST TO BREAK NEWS OF TEAM QUINTON WORKING ON THE NEW DOWNTOWN STADIUM!!!

Now, it seems that some of the closest news watchers in this town are contemplating a move that might make or break the new Administration.

Actually, it's not a horrible idea.

Facing a rescission, the downtown park won't really be about baseball but about economic stimulus and if it's build properly it could also serve as an outdoor music arena. A win for KC.

Yeah, none of that. Likely just the 1st step toward bankruptcy.

haters on this blog never get the big picture that the K is outdated and needs to be replaced.

Kauffman Stadium is on the east side of Kansas City.

On the plus side, this ridiculous announcement will provide a distraction from the fact that Lucas' "anti-crime" initiatives have amounted to ZIP.
And don't forget that KCMO government is all about building things, not providing services or resources to people who actually live there.
It never changes.

Must be on the wrong side of the east side

Billionaires should pay for their own stadiums.

I'm conservative all the way through, but a downtown stadium is one of the only taxes I'd support because it actually does provide revenue from 81 games a year. Downtown can handle the parking easily so fuck off grandpa. Trying to navigate the parking lot out at the sports complex is worse than downtown traffic.

The stadium is so far out in the middle of nowhere that it does act as a gatekeeper in a way to seeing games. Lots of people live downtown and could easily walk to a games and would make for drawing in spontaneous baseball goers. I know a lot of people living down there who don't give a shit about baseball but would go if it were there to check it out and socialize and these are people who would never go east to watch a game. It's about drawing in new fans and this would help a lot. Plus, if there's a convention or some shit in town there'd be people checking out games too.

Sure, I'd rather it all be privately funded but if this city will spend $150 on a retarded train that only travels a mile and millions on an art fair no one wants to go to at swope park, or millions on 18th and vine, etc....we may as well put the money toward something that is actually proven to drive business and money into the city

12:11, Where will KCMO come up with the $1.2 Billion that a new Baseball Stadium will cost. It ain't gonna be Jackson County taxpayers!!

Stupid idea, they built the stadium where it is now because nobody wanted to go downtown anymore, they still don’t, parking was a nightmare back then and it will be worse today, the crooks would have a field day breaking into cars and robbing people downtown, just because the millennials are too stupid and lazy to drive... wait, what? They don’t have cars? So it appears the trend of downtown first is continuing, fuck the rest of the city, Lucas just showed his ass and true intentions right there.

If we had a new stadium downtown every game would be a sellout . 25 million trillion new visitors each year. We would be the envy of the World.

More homosexuals would attend games if the stadium were downtown. They like it when the batter gets 3 balls or 4 balls. The faggot bars are already downtown.

Quinton only goes to gay bars in Lawrence. We are not supposed to know he is gay.

The baseball season is long as shit....would you rather see a game with a mediocre (a stretch at this juncture, I know) team in a part of town where you can grab dinner, drinks, etc. or hang out in a huge ass parking lot with like 12 other people total? I know my answer.

12:11 stay on your side of the state line and support the T-bones, your KS taxes aint paying for any of it now - that wont change.
Get Granny Kelly to build you a park when she aint binging on Matlock

Anyone notice that Oklahoma City just finished a much longer and lower cost toy train system with no public money.

I would rather see the new airport be moved closer to downtown, that shit is a day drive from the golden ghetto!!