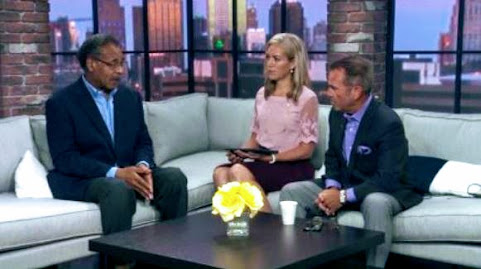 We talked about Congressman Cleaver explaining his position on a possible Prez Trump impeachment inquiry recently but there's an observation that everyone but our most dedicated readers missed:

"The headline everyone missed was that Congressman Cleaver would NOT call the President a racist and he's the former head of the Congressional Black Caucus."

Fox4 Morning Anchor Asks: Is The President A Racist?

Congressman Cleaver Responds: "I don't call anybody a racist. Even if I know deep down in my heart that they are, I don't do that because once you call someone a racist, you essentially shut the door. There's no communication . . . What I know that he has done is continually make statements that are racially insensitive and hurtful and I think people are afraid of what it's doing to the country. I am as well. It's tearing this country in two."

And so, in order "enlighten" the online discourse we note that . . .

Agree or not, when offered the opportunity; Congressman Cleaver maintained his opposition against Prez Trump but DID NOT call him a racist.

Facts don't matter to Conservatives. They go with their feelings. They feel hurt to they make up lies. Typical Republican snowflakes.

The grifter fake reverend is right. He knows if you call Trump a racist, you have to be honest about real racists like Farrakhan, Omar, and Sharpton.

Why hasn't Channel 4 fired or bought out Mark "I still can't read a teleprompter and "uh" is my favorite word" Alford yet. Idiots

Yes, trump is a racist. So are the majority of his disciples. It's a cult. A racist cult.

The dummocraps are the ones tearing apart, they’re killing their own party and that’s dividing the country, not whitey, sorry, truth hurts. People don’t want to be a part of that. The constant screaming and yelling racism isn’t helping their cause, they don’t even know what the true meaning of racism is anymore. What exactly is it the dummocraps want to do for their party and the people? I have no idea anymore what their plans for the country are. And it’s apparent they have no idea either, they are a boat adrift at sea and the boat is taking on water.

8:54 if your telling other people they’re racist that means you are the racist so.....

I just notice that when you call Trump and his supporters racist they go into a hissy fit and become combative. They're the biggest babies in politics. To support Trump is to be a crybaby.

Progressives are afraid, because for 50 years, the accusation of racism was the silver bullet that slew the white “Racist” wolf no matter the facts. The discussion ended when the accusation was made and the conversation then centered on listening to Conservatives try to prove they are not guilty until proven innocent in any of the millions of extemporaneous Star Chambers in the street.

Trump has given whites their voices back. Black power? The Black Caucus? Okay.

C.A.I.R. (“Some people did something…”) Okay (Nothing to see here Tommy Robinson, no grooming gangs at all, just shut up and go to jail.).

California, the Canary in the Coal mine, is now Hispanic. It’s Mexico. That dead canary is tea leaves any moron can and should read. Whites are more and more, an ethnic minority in their own cities and states and already are only 8% of the World’s population.

Hey! How about a nice vacation to Zimbabwe, or, South Africa where the legacy of that terrorist Nelson Mandela lives today in the National Anthem called, “Kill The Boer”. Should be fun for the whole family. Right around 5K dead white farmers killed in a genocidal paroxysm of “tolerance” South African/Baltimore style.

Nancy Pelosi thinks, like Lefty, if she makes deals with the devil, then the devil will kill her last. Dumb-Ass white people like Lefty and Nancy just don’t get the tribal, identity, “Back To Blood” mentality that motivates the direction of the Democrat Party today. The Devil, is interested in Blood, then proximity and exigency in a circular pattern, that circles always, “Back To Blood”.

Democrats hate whitey and prove it every day from Washington D.C. with racist “Affirmative Action” type legislation, from Hollywood where black movie stars wax longingly to be in movies where they “Get to kill white people” and in Academe where our children are indoctrinated and the hoped for outcome is an ethnomasochistic-Hale-Bop, self loathing anti-fa, gelded, Jannisary Social Justice Warrior.

The pretense that Democrats are altruistically motivated at the border for illegal immigrants is preposterous. Democrats lost the Rust Belt white middle class vote and are DESPERATE to replace that electorate with Government dependent illegals, paid for by the very people (The Middle Class) that they are replacing.

If you listen, your enemies will tell you what they want and what they believe. They hate you white boy, sorry, it just is what it is.

Trump knows that the Democrats HATE whitey – want him replaced and many, like Oprah, want us dead.

Pretty much every Democrat in the debates have made peace with Louis Farrakhan and embrace the violence of Anti-Fa.

For far too long, conservatives have been cowed by accusations of racism and forced to defend uncommitted sins.

Embrace White Power, just as the people in the Democrat Party embrace Black Power, Brown Power and an Anti-White agenda.

Now that it comes from Donald Trump, there's outrage among Democratic politicians.

If you want to call out Trump as being racist then you need to call out Sanders for the same. Democrats, such as Cleaver need to be called out on their exploitation of minority communities in this country. They want their votes, they want the glory of being elected by the poor people then quickly turn a blind eye to help their communities.

What Trump has been saying isn't racially insensitive and hurtful but the cold bloody truth and we know the Democrats don't want you to think about the truth. It's the actions of what Cleaver and his pals are doing that's really dividing this country. Remember Cleaver did a fair amount of dividing this city when he was Mayor.

No single president has ever divided a country as much as Obama did. Cleaver was right there helping him do so.

Cleaver is smart enough to knw that Trump isn't a "racist".
Like all bullies, Trump is contemptuous of everyone who isn't rich or powerful enough to scare the piss out of him.

Skin color or ethnicity makes no difference to Trump's World View, he has contempt for us all!

I can see the meds aren't working.

Who was screaming at the sky again? Kthxbye.

@11:27 WRONG!
Judge Russell Clark and Lawyer Arthur Benson did far more damage to the Black Community in Kansas City than Cleaver ever did.

"Everyone knows that I'm the least racist person in the world". - Donald Trump

He said that Don Lemon was "dumb" for not understanding this truth about him.

What everyone knows is that that statement is indicative of mental illness.

There's no need to even discuss it. In fact, the discussion its self is nonsensical.

Quick question, was anyone able to make it through stupor dave's post? I couldn't. It had no premise, no coherent though whatsoever, and was just the biggest mess of word salad I've ever seen.

"What everyone knows is that that statement is indicative of mental illness." That's very dumb.

@12:13, would you mind repeating your post?
In English this time?

Byron a true psychopath trying to convince us that he isn't and others are.

bLIEron is a racist hate filled lying sack of shit, that’s exactly who he is.