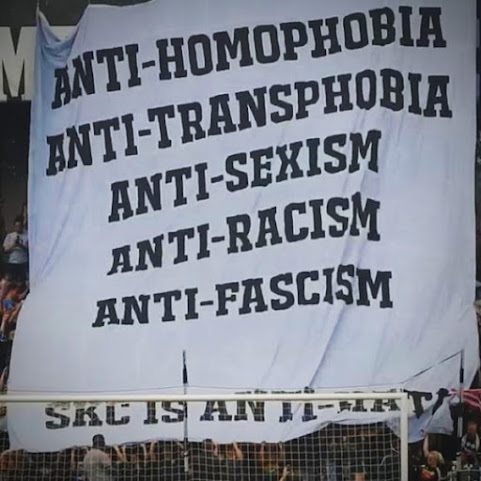 Sporting KC has endured a tough season on the field . . . They have lost a bevy of close games, struggled to fill positions and haven't really found their groove.

However, there's no doubt their most strident supporters remain loyal to the team and their inclusive branding.

Thing of it is, soccer fans in general are pretty progressive . . . Another example tonight amid a Sporting road game and sign of the times confirming that the culture war now dominates every aspect of American life:

Opposing views during a march to the match are nothing new for Sounders fans. But the animosity about 100 people encountered Sunday as they walked and chanted from Pioneer Square to a match against Sporting Kansas City was different.

Both sides are at a soccer game.

Translation: They both lose.

I never thought I would like soccer and I don't call myself an expert but I really like the Sporting KC games. Very fun and a great vibe from the crowd. The signs crack me up. After that guy rode nude on the ATV they had a huge banner made for him. Very fun!

Would have read the article, but don't wish to subscribe to the fucking Seattle paper.

All this enthusiasm over mid-level minor league soccer. Strange!

Isn't "Proud Boys" the group of far right gays that never shows up except in gangs and has a chicken as the symbol on their logo?

^^^ No. They are the bunch of queers that has a great big cock as the symbol on their log.

^^^^^And yet they're more effective than you'll ever be. Weird.

A bunch of "Pajama Boy" pussies who used Gillette razors to cut off their nuts.

"Anti-Racism" - Move down to 37th and Benton and live with your heroes for a couple of weeks. See if they want to turn in their guns.

^^^^ Still better property values than next to your trailer. Weird.

You say "soccer fans in general are pretty progressive."
Based on what, your small group of friends?

Well, genius, maybe it's based on that huge banner saying that sporting KC fans are against hatred and racism.

Jesus, that's the problem with Conservatives. You think you're so smart until you're challenged by someone who isn't afraid of you and then you fall to pieces.

Soccer fans in the US don't like any other sport and they only like soccer because oh la la how international. If they'd ever seen the sport played in England or any other country over there, they'd have a cognitive dissonance fit upon realizing English and European soccer fans are far more racist, close-minded, and well unworldly than even the worst American football fan. Soccer fans in the US are tied with cyclists for the worst breed of citizens

Man, trying to keep track of all this who hates who is getting tiring.

@10:56, the great secret is, it's hatred from the Right and amusement from the Left.

The Far Right Wingnuts are sooo cute when they start foaming from the mouth and pissing themselves!

The Daily Stormer Is Back Online said...

Soccer ? I've heard of that. Is that like Hockey except without ice or sticks ?

Being a progressive socialist is nothing to take “pride” in. Antifa are the real socialists.

Why can’t you poofers tolerate my intolerance?