Newly named MLK Blvd is quickly becoming one of Kansas City's most violent and dangerous streets.

IN THIS ACTION PACKED CLIP, KCPD CONFRONTS GUNFIRE AMID CHASE THAT STARTED ON MLK BLVD AND ENDED NEAR DOWNTOWN KANSAS CITY P&L DISTRICT!!!

That while light in the distance seems to be suspects firing a big-ass gun from a few blocks away . . . 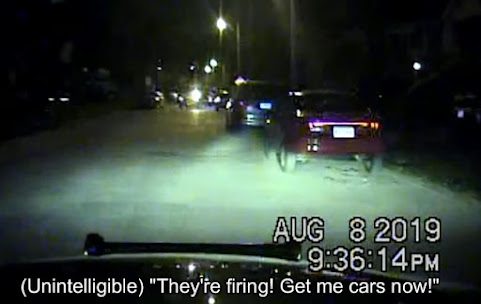 A KCPD officer is safe after suspects fired numerous shots at him during a pursuit Thursday night.

At about 9:30 p.m. Aug. 8, the Metro Patrol Division officer saw a car parked in a vacant, overgrown parking lot with no lights on. The officer surveilled the car for a few minutes and then attempted to stop it. The driver stopped briefly before taking off again. As the vehicle drove away, the occupants of the car fired numerous rounds at the officer from about 66th and Paseo to 65th and Woodland. (starting at 1:01) He was the only occupant in the police vehicle.

The officer continued to pursue the suspect vehicle and was eventually joined by other officers. The pursuit ended at Truman and Locust, where police deployed Tactical Vehicle Intervention (also known as the PIT Maneuver) (about 7:56). Officers took three suspects into custody without incident. They located a rifle and two handguns in the suspect vehicle.

The officer has been with KCPD for two years. Fortunately, he was not hurt, nor were the suspects or any innocent bystanders

Congratulations to the driver who is in a high speed chase but continues to use his turn signal.

At least he is trying to be courteous.

Basketball Americans at it again

I am sure those thugs would have turned in their guns if we would only pass some Gun Control Laws.

Maybe Sharice Davids could get them to surrender, because, you know, White Nationalism...

These eluding fucking felons causing pursuit shit makes me wish the popos could do a serious beatdown on these lowlife mofos. Those good ol days of COPS episodes were the right way to end the takedowns. Bad boiz, bad boiz, whucha gonna do when the popos kick the shit outta you?!

SO VERY MANY INNOCENT LIVES RISKED FOR THESE NO GOOD NIGGGGGGGS!!!!!!!!!!

It's a small world after all.

I also like how many ignorant people didn’t get out of the popo’s way on the highway of death, those people are morons.

WOW!!! Just WOW. Great job KCPD and they got the bad guys.

Jean Petersucker Baker will consider this unworthy of prosecution. She isn’t worth a damn. No skill and no desire to put criminals in prison.

Killa' City Action at it's finest.

Actually, a good job would have resulted in dead ghetto punks.

I can hear Dana Wright shouting This Great City!

Tourists got a good show.

Beginning with the ignorant cuck at 2:11, the libs on here are stupid if you believe Congressmanly Sharice will email that survey to anyone that isn’t on the Democrat donor list. She then can have someone that actually qualified for law school to tally the results and declare gun confiscation long overdue.

It wouldn't have happened if the g. rats had completed gun training.