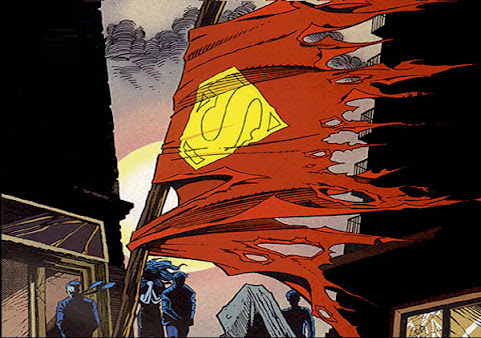 This week activists and political leaders across Kansas City worked to decry the recent surge in gun violence and promote "solutions" which seek to further limit 2nd Amendment freedom. In fairness, A blog comment fave and our friend Super Dave shares this homespun note on the current fight to increasingly crack down on Constitutionally protected freedom.

It's funny what people get upset about . . .

On average, 100 people per day die in car wrecks and nobody seems to get to bent out of shape about those figures. Nobody is screaming to ban cars. But a murderer uses a gun to kill someone and people don't scream to hang/lock them up and throw away the key; instead they scream to ban guns. So you see the gun isn't the issue, it's those who misuse a gun.

People say we need cars but not guns. Funny how people love cars no matter how many die from them all the time. Guns and cars are one and the same. Each is a tool used to perform a task. There are many who need a gun for protection and to protect what they own They need them to protect themselves when traveling through areas with dangerous wildlife and many such areas are located in both Kansas and Missouri. Most people don't need two-plus cars but they own them. Not everybody needs an assault rifle either but, then again, people don't really need a sports car capable of going 100 plus miles per hour . . . Still, they're allowed to own potentially deadly and dangerous vehicles that are fully capable of breaking the law.

Many Americans are unwilling to face the truth about what is wrong with our country. They say harsh punishment isn't the answer but it's sure funny how that worked on me, and so many others in my generation, as a child.

Many of those who attended a vigil in Ohio turned it into a hate filled show, blaming someone who was the furthest from the actual cause of the attack i.e. President Trump. It's worth considering that kind of misdirection and media manipulation is to blame for a lot of our issues.

We are quickly heading down a road where the facts and the truth are pushed away so lies and hate are the basis for making decisions. That's insanity . . . They say the truth will set you free and it's time our country and our cities start accepting what is the truth and dealing with it. Ignoring the truth will never solve the problems that we confront everyday.

If you hit your finger with a hammer is it the hammer's fault or yours?

Put blame where it belongs and that's on those who have refused to be honest and deal with the facts of this current gun crisis and so many other problems confronting our nation.
##########

Only a moron would refer to himself as SuperDave.

His argument is also moronic.

Well well, der fuhrer funkmyass has spoken, you are a racist hate filled liar and a cheat, you bring nothing to the table, why are you still breathing?

I do not understand, although I live far away, why I cannot seem to find people, aside from TKC, who wish to post my thoughts. Not in my home state, nor anywhere else for that matter. Puzzling why they apparently do not give a shit about what I have to say. I know I'm more intelligent than you conservatives.

Byron, when you arrived at the location to take the Mensa qualifying test, I heard they sent you four doors down the hall, to prep for the Darwin remedial class.

The facts are that a gun is present at every shooting and the mantra "guns don't kill people, people kill people' is sophomoric at best. But I would ask..ok...which can we get rid of.

^^^ Well Hype, based on the evidence, we seem to be trying to get rid of people. And as long as it's "people", and not Whites or Asians, I'm fine with that.

More whites die from white on white gun violence than anyone else. Please go back to school and take Super Dave with you.

^^^^^^I don't remember Dave making any race comments. Also whites are the larger portion of the race here in America but does the less killing per 100k.

Did you know this 11:01 before you showed your ignorance??Men committed 62% of murders and were 79% of all murder
victims.
Black men committed 36% of murders and made up 52% of all murder victims.
White men committed 30% of murders and accounted for 43% of all murder victims.
Homicide is largely intra-racial. Of crimes involving a single offender and victim: 81% of white victims were
killed by a white perpetrator; 89% of all black victims were killed by a black.
Notably, black men were victims of murder and
non-negligent homicide 1.5x more frequently than white
men, and 3.3x more frequently than Hispanic or Latino men.
(FBI, Crime in the United States, 1995 - 2015, (U.S. Department of Justice)

Overall, I concur with Super Dave's viewpoint. The highlights and differences:

The analogy to vehicle deaths is apropos. Today I can legally purchase a street-legal racing car/motorcycle and NOBODY would bat an eye. Local news media would likely come out and do a positive interview with me, especially if I mention that I mentor neighborhood kids.

"They need them to protect themselves when traveling through areas with dangerous wildlife and many such areas are located in both Kansas and Missouri." Maybe this was Super Dave making a joke about traveling through KC/St. Louis urban areas? If it wasn't a joke I don't what dangerous wildlife he's referencing, as I don't need a gun to protect me from any animal (other than humans) in KS/MO.

The fact is, there's an ongoing long-term agenda to revoke the 2nd Amendment in this country. It's an issue of political control. It's much easier to herd and manipulate the population when they can't possess firearms. The China-model of authoritarian control is the goal for Western countries. Until the goal is reached, corporate media in conjunction with the Democratic Party will continue their propaganda war for this agenda. It's an anti-gun, anti-free speech, anti-sovereign borders, anti-unborn life, anti-religion, anti-traditional family, anti-individual responsibility agenda.

Specifically in KCMO, to Super Dave's point, have you noticed how Mayor Lucas and Council are obsessed with the tools of homicide, but not the perpetrators of homicide? As readers have pointed out numerous times on this blog, the key to reducing the KC homicide epidemic is to be found in the KCPD's own published data. If you're unwilling to acknowledge where the problem lies, you have no chance to solving the problem.

Here's a difference between a vehicle and a gun. People need vehicles to transport themselves to a job site and also transport goods from factories and farms to stores so one can purchase food and other goods. A gun on the other hand is just a weapon to kill and that is it.

Hey dummy, my guns haven’t killed anybody that didn’t deserve it! Hahahahaha!

Leave the gun.
Get the cannoli's.

I don't want my brother comin' out of the John with just his dick in his hand.

11:12 you must not spend any time outside Kansas City much. Lots of people go camping and backpacking in areas where snakes, bobcats and coyotes all roam in the two state area. While the chance of getting attack is slim the treat is there and so many do carry small firearms for protection. Black bears are making a come back in Missouri and again rarely will one attack you but again if one were to do so wouldn't you like to be armed over not being armed.

I grew up camping and fishing in areas all over the midwest and many years later still enjoy hunting and fishing along with camping and have a few times had to deal with copperheads/water moccasins who get pissed when disturbed. In over 60 years of being in the what I call the rough areas of our country I have seen even coyotes who have to be dealt with when running on packs.

Yes I view a gun as a necessary tool and I also see motor vehicles the same way. In fact you're more likely to be killed by a car than a gun. But Americans have a fascination and obsession with it's cars so no matter how many a year are killed with them they will never be willing to mass changes about them. Murder is committed by people and people alone are to blame for it. Same as most killed in cars is due to a person's poor judgement. Blaming an object for the murders is the cry from those who are very unwilling to admit that society as a whole is out of control and the lack of proper criminal dealing is really a lot of the issues. People who can't behave in society have no right to be a part of society. If an animal goes rouge it is hunted down and dealt with. Humans are as well mammals and when they go rouge they as well should be hunted down and put down or put away to protect those of us who do respect life and those we share it with.

That cars and guns analogy is effective and fair when human BEHAVIORS are compared while operating them. A driver who is any, or combinations of the following: drunk, drugged, distracted, untrained, mentally disturbed (including road-rage), and operates a vehicle not PROPERLY MAINTAINED...
...is a potential harm to self and others. And, statistically, a fatal harm!!

A gun use is a potential harm and KILLER when operated by anyone who is in any, or a combination of the same conditions as listed above for drivers.

RESPONSIBLE AND SAFE USE OF VEHICLES AND GUNS IS WHEN OPERATORS ARE SOBER, SANE, AND KEEP THEM IN GOOD CONDITION.

A gun user is a potential harm and KILLER who is in any, or a combination of the same conditions as listed above for drivers:

I don't know who I'm more embarrassed for.

Stupor Dave, who doesn't understand the difference between a gun and a car.

Or Tony, who thinks this is a brilliant conservative argument.

^^Sorry that the truth hurts your feelings and embarasses you.

He’s skeered of the fire stick that goes boom

Cars protect us from....wait for it....dangerous wild life in Kansas and Missouri??? What the fuck is that guy reffering too?

Hey 12:39,
I agree with your comments, except the need for a firearm to protect myself against KS/MO wildlife.
You don't think I get out much? Hah! I actually saw a copperhead earlier today while out walking. Didn't have a gun with me, and even if I did, would never fire it at a snake who was just crossing the trail in front of me.
I've seen coyotes many times in my area, and they all avoid human interaction.
Bobcats are a rare sighting for me, but the same thing applies, you'll be lucky to spot one at a distance. Because of their small size, they don't go after humans.
Carry a weapon in KS/MO in case you run into a crazy human.
11:12 here

^^^^^that was just totally stupid

As people try to limit guns more, the street value of them goes up. Outlawing drugs and booze worked well er no I guess it didn't. It did lead to more crime though.
Many places in Europe have decriminalized drugs and prostitution and their crime rate is quite low.