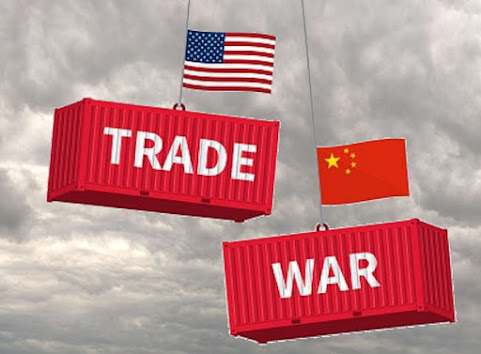 A really thoughtful, entertaining and informative note from a TKC blog comment fave on trade talk and the road ahead . . .

Chuck: The Epic American Hangover And A Chance To Heal

In my "Salad Days" I rode Harley's though the wind and cocaine and booze through my wallet. Many was the morning, I woke up and tried to remember where I was, where I had been and what had happened to all that money.

America, is HUNG OVER!

The U.S. is 21 Trillion Dollars in debt. There is a straight line reference from that debt to the parasitic relationship we have endured for the last 19 years in hopes of Chinese "Normalization". Many if not most of the 70,000 factories and 7,000,000 jobs were lost by way of the U.S.-China Trade Relations Act Of 2000. Presidents, since that time, have accepted the constant dissimulations and flat out lies from the Chinese in hopes that Democracy would find roots and flourish in a post Mao "Middle Kingdom". Every President from Bush II, through Obama and now Trump has promised to fix the dramatic 800 Billion Dollar A Year Imbalance Of Trade, yet, until today, it remained a velleity.

Hope sprang eternal, yet, we should have known, especially after Tiananmen Square, it was a pipe dream full of Fentanyl. A fissiparous relationship in the best of years, our pain, our money and our decline was fungible and translated into the rise of an enemy who thinks in terms of "The Art Of War", while we parroted the worst efforts of Neville Chamberlain.


The hierarchy of suffering, over the last 20 years, has been egalitarian. While Wall Street got rich, Main Street was gutted for cheap labor, cheap products and the hopes of the declining middle class, that they could somehow latch onto a job that paid enough for a slice of the 401K pie. Thanks Wall Street.

We should, in the face of the lies that will now come - a tendentious, repetitive narrative that is confirmation bias catnip to fools, realize that there is no division here. NONE. This Tariff War, MUST be seen through to the end. Americans MUST be able, once again, to acquire good jobs at decent wages that promise a better life for their families. Grab a handful of aspirin, get on the bike and drive into the sun pal, it ain't gonna be any walk in the park.

Well you write a little better then Glazer we will give you credit for that.

"In these horse latitudes of late summer, with the seas becalmed and the riggings a’creak, the Resistance’s ship-of-the-line (a.k.a. the Democratic Party) drifts ever further out of sight of land. Even so, a few of its crew members have jumped ship: New York’s mayor, stowaway Bill de Blasio, may have been shoved overboard. Former Colorado Gov. Hickenlooper walked the plank clutching the lifebuoy of a sure-thing senate seat. Washington State Gov. Jay Inslee went mad drinking seawater and dove in after hallucinating a school of beckoning mermaids. Months from now, the accursed vessel may be discovered mysteriously deserted, prompting tales of mutiny and cannibalism, like the brigantine Mary Celeste of legend."

The Bushes, Clintons, Obama and their Wall Street globalist friends have been working to wipe out the American middle class with great success.
Many Congresses of both Parties have gone along.
Now all of the above and their complicit media are enraged that Trump is resisting.
Thanks again Chuck for sharing your insights.

Choose goods that are not produced in totalitarian communist regimes that are dedicated to our destruction. Finally an American leader with stones.

Let's face it, Americans, particularly white people have made a terrible mess of everything. Parading around to world preaching democracy and starting wars, pushing american workers under the bus to run into china and the rest of the developing world to enslave people for free labor, allowing latinos into the US illegally in order to get almost free labor, and to top things off, elected the worst possible person to be POTUS simple because he conned them into thinking he was a billionare businessman. Never seen such a large group of dummies.

Make no mistake the chicomms are getting it broke off in their ass. It’s about time someone stood up for us it may take a while but we have no choice it has to be done otherwise we’ll just be another failed state with a bunch of democrat traitors at the helm

We cant win a trade war with China. They hold the cards. We buy most stuff from them. They buy little from us. They hold 56% of US Treasury bonds. We are screwed.

Really nice work Chuck. Excellent writing and some great information along with a solution and call to action. Can't ask for more than that. This what we need more of in Kansas City.

Thank you, Chuck. GREAT job of connecting to dots back to 2000. Shocking, actually.