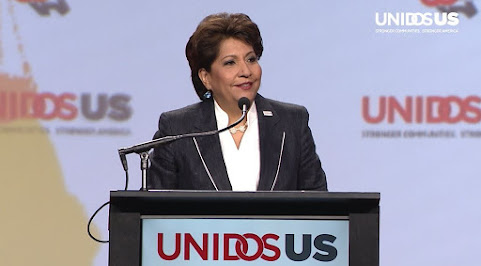 Native to Kansas City, Kansas, the Muguia family is comprised of lawyers, business people, judges and elected officials. Janet Murguia grew up in The Dotte and she's also the leader of the largest Latino advocacy group in the nation.

UnidosUS was formerly known as the National Council of La Raza but they've rebranded and amped-up their mostly partisan advocacy.

"For years we have dreaded this day. What we saw Saturday in El Paso is directly connected to the continuing, hate-driven rhetoric and policies coming out of the White House. Violence is a terrifying but not unexpected outcome when our nation’s leader tries to normalize hate."

Checkit the letter to the NYT also sent to locals across the metro and the nation:

Janet Murguia Via New York Times: The El Paso Shooting Is the Violence Latinos Have Been Dreading

This is what happens when our nation’s leader normalizes hate.

Ms. Murguía is president of UnidosUS.

SAN DIEGO — Like most Americans, I watched, devastated, as the news began to unfold Saturday morning. Another deadly mass shooting. This time in El Paso, and soon after Dayton, Ohio. In El Paso, 22 lives were taken; dozens more families and communities have been left to suffer in its wake.

The violence in El Paso is not about immigration policy. It is about promoting the hate, fear and division sown by President Trump. In the past three years, Mr. Trump has systematically sought to paint a hateful portrait of Hispanics. “When Mexico sends its people, they’re not sending their best,” Mr. Trump said when he announced his presidential candidacy in 2015. “They’re bringing drugs. They’re bringing crime. They’re rapists.” In 2016, he accused an Indiana-born judge presiding over cases against Trump University of being biased because of his Mexican heritage.

As president, he has only amped up his rhetoric: He has referred to Latinos as “animals,” and likened immigration along the southern border to an invasion. Every hateful word he utters about us, every time he laughs when his supporters joke about physically harming us dehumanizes Latinos and reveals his true nature.

Worse still, Mr. Trump’s rhetoric appears to be emboldening white supremacists. The shooter’s manifesto — posted shortly before he opened fire at a Walmart and massacred innocent people — mirrored Mr. Trump’s language: “This attack is a response to the Hispanic invasion of Texas.”

For the past several years, Mr. Trump hasn’t just talked the white nationalist talk, he’s walked the walk. He has tried to limit our right to vote, restrict our access to housing and health care, prevent us from being counted in the census, and he has turned his back on our fellow Americans in Puerto Rico. Rather than focus on the many issues critical to the American public, he has refined his attacks on Latinos and immigrants and wielded his executive power to fulfill his deeply bigoted views.

Trump’s three-part strategy has been made pretty clear: Dehumanize Latinos with hateful rhetoric; strip away federal protections that safeguard our rights; and promote policies that marginalize our families and stoke division, fear and violence.
We should have spent the last two and a half years working to advance our country. Instead, we had to focus on protecting the progress we have made — while also responding to the administration’s cruel actions that traumatize children, inflict pain and break down communities.

Mr. Trump has not done this alone. He has a powerful group of enablers among Republican leaders in Washington, some of whom on the campaign trail called his vile language “bigoted,” “offensive” and “un-American” but who today can’t seem to find their voices or their backbones. Their silence in the face of increased hate and violence amounts to complicity.

For years we have dreaded this day. What we saw Saturday in El Paso is directly connected to the continuing, hate-driven rhetoric and policies coming out of the White House. Violence is a terrifying but not unexpected outcome when our nation’s leader tries to normalize hate.

It is no wonder that gun violence was a top-five issue for the first time ever in the poll of Latino voters we released today. Latinos are fearful for their families and their country, and they have every reason to be.

But our poll also showed overwhelming support from Latino voters for a candidate who pledges to restore our American values, specifically a candidate who remembers that diversity is our nation’s strength, and who will work to unite all Americans. Latino voters are also pragmatic, solution-focused and would rather have elected officials work in a bipartisan manner than have them dig in on partisan policies. This gives me hope: I truly believe that the vast majority of our fellow Americans want this as well and reject the fear, hate, division and violence that has marred our great nation.

UnidosUS, the organization of which I am president, believes it is long past time for a thoughtful dialogue that involves all communities who have been pitted against each other. Such a dialogue would seek to not only challenge hateful rhetoric but also to elevate the values of our pluralistic society and advance equal opportunity for all. And I can assure you that if other communities are willing to join us, Latinos are prepared to lead the way.

Janet Murguía is president of UnidosUS, formerly the National Council of La Raza, a Latino civil rights and advocacy organization.
##########

She's all the way out there on this one. I've seen her on Fox news a few times before. She's one of the few people that Tucker Carlson is afraid to yell at too loudly.

Sure, Murgia's are doing fine but everybody else in KCK is screwed.

^^^ Not fair, prominent people are allowed to have a viewpoint as well.

What I will say is that her poling and her organization overlook all of the Hispanics who support President Trump and voted for him over Hillary.

She totally supports criminal illegal aliens coming into the US. Good woman!

Sadly the Hispanics have always thrown their support to the wrong party. I don't believe they really understand the concept of voting for the party that supports their interest.

Why isn't she mentioning Obama had 32 mass shootings during his regime?

She should just say______ Trump should be enjoying White House champagne and caviar party's and schmoozing with the Stars like Prez Obama did instead of talking about it.

I bet she misses her deputy assistant "position" she enjoyed working for Bill Clinton.


And we the people condem Janet Murguia and her mafia. Want a civil war Janet? Keep it up bitch we will give it to you. Your little club is racist and Anti American! IS Janet so stupid she doesn't know it was her party that did the shootings! I would like to argue how This is Trumps fault it's more like Janet's fault hating on white people and letting illegals take your job. So Janet take your latino shit and shove it up your racist ass!

^^^ Amen, the demoncrats are all about division. No ideas other than hate.

@9:15 sounds very hateful and threatening. You kind of prove her point and you seem like a scumbag. I hope that's not the case. She has the right to speak her mind without being "targeted" by idiots like you.

Nonsense. Nauseating haymaking on the bodies of the dead. Opportunistic, cynical, and shameful.

I thought most of her family was Republicans. I guess you have to have all of your bases covered.

Didnt she say she was against illegal immigrants and supported the Presidents plans?

Did she condemn Elizabeth Warren and Bernie Sanders for the Dayton murders? The majority of those killed in Dayton were black. She must be a racist.

Democrats don't want you to know that the shooter was a liberal who supported socialism, Elizabeth Warren and Bernie Sanders.

this racist should keep her mouth shut. Why do hispanics support this racist behavior?

^^^Why so you can bitch about that as well?

At least she signs her work.

The shooter was a Democrat.
The horrible name-calling of the Democratic Party has caused indignation across both parties and has lead to violence.
The awful media libeled the poor Catholic boy and sever apologized.
LaRaza- or whatever they call themselves these days- need to talk about how Obama deported more Latinos than Trump.
Hate is hate... is hate.
The media is complicit.

Ann Murguia has very nice titties but has a problem with being violent herself. Wasn’t she arrested were being drunk and fighting?

La Raza, Unidos US, whatever the hypocrites WANT to call themselves ARE HELPING THEIR FRIENDS MAKE BIGLY BANK OFF THE BACKS OF THE MEEGRUNTS HOUSED IN DETENTION FACILITIES AND CHILDREN'S SHELTERS IN FORMER WALMARTS AND DOZENS OF OTHER BUILDINGS THROUGHOUT THIS NATION. These "immigration" centers are administered by an organization going by the name SOUTHWEST KEY PROGRAMS/Juan Sanchez, CEO. Sanchez IS ON THE BOARD OF LA RAZA!!! HE AND HIS WIFE are cronies of Cecilia Munoz, past VP of the National Council of La Raza, who left La Raza to accept a White House appointment from OBAMA!!! IT IS THE LA RAZA BUDS PAYING THEMSELVES BIGLY MILLIONS TO PACK THOSE ADULT DETENTION CENTERS AND TO KEEP KIDDIES IN THOSE CAGES!!!

"The White Supremacy problem in this country is a hoax , up there with "Russion collusion". --- Tucker Carlson

So how is bringing people in from other countries to do the work Americans don’t want to do not slavery?

A 3rd gen Mexican family in my parish operates a roofing and handyman business, and are currently doing well at it. Quality work and everything done legally gets them steady referrals. They're not happy to have "undocumenteds" or, "sneaks" coming here and working cheap and untaxed. The competition for clients is one part of it. And the pooled contributions to liabilities insurances, license fees, and tax obligations are a very big part of it. When "cheats" aren't paying these, the costs are higher for the businesses that do. Uninsured workers are able to and have gotten compensation for injuries. Seasonal cash-paid laborers who take or wire their earnings to another country are robbing taxes, plus frauding health, safety, and social programs by skipping out on those payroll deductions. Bad hombres better get right, or stay in the hellholes and operate their scammy crap outside the US with their corrupt and cartel attitudes.

Obama gave her a job & relevance. Thats why the selectively advanced *TDS* agenda. She's a race baiter that is Anti-Trump. B.Hussein is her prince