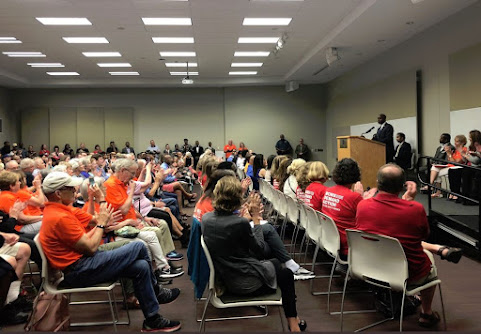 Tweets from a few moments ago:

Mayor Quinton Lucas: "Working on a gun related ordinance for today and I may owe props to DC. Federal law seems to prohibit handgun possession by minors with a bevy of exceptions, exceeding MO limits. Thus, can ordinance cite to fed prohibition and invoke fed preemption in the space? Hope springs!" 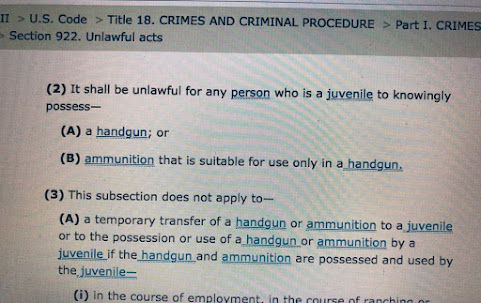 "Theory here would allow confiscation by police of handguns possessed by minors where no parental consent, military service, or employment requires possession." 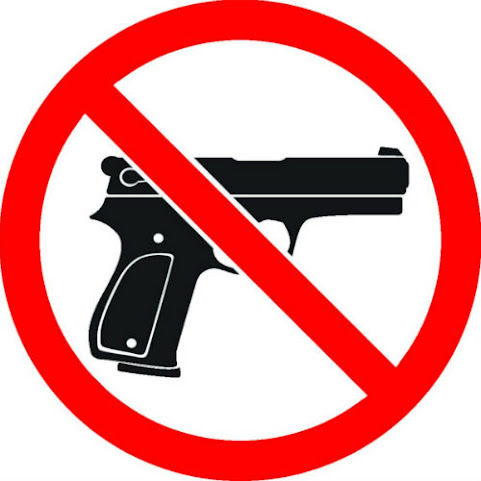 Once again the mayor of Kansas City targets guns in the fight against rising crime. It's not a horrible ordinance but without hiring more police to conduct the confiscations and little support from the courts to crack down against minors breaking the law . . . It's a hopeful legislative move that still might not have much real world impact.

Let's assume it works and police start taking away gun from youngsters. That's not the worst thing in the world BUT with a supply of 300-MILLION firearms in the U.S. -- Getting a new gun is EXCEPTIONALLY EASY and renders the ordinance basically impotent.

IS MAYOR QUINTON ON THE RIGHT TRACK BY FOCUSING ON TAKING AWAY GUNS FROM YOUNGSTERS?!?!?

There's no doubt this is clever legislation that looks at the details of current gun law from a fresh perspective.

KCTV5: The discussion brought a packed room filled with community members, lawmakers, and also area organizations that deal with the victims of violence.

Taking away guns from minors who bring them to public places is a great idea. Quinton deserves credit for it.

But this will require frisking young men who might have guns on them. Will the community support that as well? I hope so.

Still can have shot gun open carry in Missouri for my parade!

A real look at the law from Quinton, better than Sly just blaming Jefferson City. The new mayor is already doing better.

This will make curfew enforcement even more effective. I support the mayor on this.

Stop and frisk by any other name.
Great idea and way past time.
And if the effort is focused and properly staffed in the appropriate part of the city, it's certainly a good start.
But just wait for the push-back from the "activists", revs, ACLU, and other "social justice" crowd.
Good test of who's serious and who is not.

^^^^ Absolutely right about the push back. Once it's enacted, there will be "community" outrage about the enforcement. The same thing happened with the curfew.

The question arises.... how many minors who are found with guns are *currently* being allowed to *stroll off* with them with a cheery "Have a good day" from the fuzz? None? Few? Most?

Smells like stop and frisk to me. Not that there's anything wrong with that. But a lot of people will object.

Bring back stop and frisk. It worked in NYC and will work in KC!

Need to stop pulling cars over and searching as well.

Only in the hood, of course.

^^^^ that's how it starts. Get used to gun confiscation, it's the future.

The only guns these youngsters will sell will be their grandpa's ancient.410 shotguns or other obsolete weapons. Do you really think some badass gangster wants to sell his top of the line assault rife or Glock?

So basically he’s telling the police and namely petersucker to start enforcing the law as it already exists?

Wow, this is a slap in sLIE’s face because it sounds like he had the police and petersucker ignoring the laws. Interesting.


Does Lucas really think this is going to work when these kids can get guns on a saturated black market? They are laughing in his face right now. You liberals are sooooooo STUPID.

9:38 lays the issue out perfectly for all to see and what I have been saying all long. But as 9:38 points out what the public is saying they want is exactly what they will scream at not wanting in the end.

There are all kinds of laws on the books to deal with guns but is America really ready for those laws to be enforced as they should be?

Freedom Inc, Cleaver, Davids and the Revs in Kansas City will be getting facetime on MSM yelling about people being profiled if any real attempts to enforce guns laws are done.

More laws will do no good when even the current laws are not being enforced. The snowflakes want to take your guns instead of allowing good law enforcement to take place.

Was Chuck there representing the interests of Mighty Whitey?

I'm not sure what this means. It's already illegal for anyone under 21 to own a handgun with a few exceptions that are basically parental supervision. Would this have prevented the girl from being murdered in cold blood at first friday because it was already illegal for that person to have a handgun? Is this just theater?

I agree that handguns are a much bigger killer than military-style rifles ever were; but isn't it already illegal under current law for juveniles to own handguns? What does this new law do?

^^^ @10:32, you make it obvious that Quinton is not the only one.
Stop hiding your tendencies and learn to live with yourself honestly.

Folks WTH? This is a good start! Spot on whoever said that this WITH curfews will make it rough on knuckleheads trying to leave the house with a gun late night. Will it stop crime in the hood, NO. Will it help clean out folks from major events like First Fridays, YES! It is stop and frisk lite and it will work. Now we just need the greedy Crossroads Association folks to dial back First Fridays to 9-9:30 like it used to be. It wouldn't hurt to bring out the paddy-wagons like they used to do back in the day as well.

So minors, those under 18 or is it 21? What's the % of crimes carried out in KCMO that are committed by minors?

Lot's of posters down with stop and frisk. I guess that's just collateral damage from the war. Can't for the life of me figure out why black people would feel that cops have it out for them.

10:19 I see that restraining order is working, you really need psychiatric help for your perverted and dangerous obsession of chuck, really dude, you are a prime example of a red flag individual that should nevar evar have weapons in your possession.

Unless these guns were stolen the police can’t keep them, they have to go back to the owners which could be the parents, can they hold the parents accountable in these situations? Would they?

Funny how the progressive’s have gotten all bent out of shape about the laws being enforced by telling the police depts they’ve been too hard on law breakers and to back off, this caused problems for at least a decade now but hey, now they want the actual already written laws enforced, it’s a never ending cycle of stupidity with these people. Just think how much further along society would be if the laws had been followed and the police allowed to do their actual jobs.

Maybe draft a law against murder.
That would work.

1:07 Progressive’s like petersucker will let them off on probation, or worse yet, drop all charges. She doesn’t know how to follow the law, and look where it’s gotten us, over a thousand murders since she’s taken over as prosecutor with large numbers of black murderers with multiple victims. The only way to safer cities is getting rid of her worthless ass. Next up frank white.

This is a start for trying to hold the violators accountable instead of punishing the law abiding citizens. This is way more than SLie even attempted to do. Quinton is trying to address the problem but he still does not explicitly state the cause of the problem. He is still dancing around a little bit.

This is why we should never elect gay candidates like Quinton or mayor Pete Buttgigged. They come up with half-assed solutions that really don’t address the real issue.

Deon'te is not a minor said...

Deon'te S. Copkney is 18 years old. Mayor Q's proposal would do nothing to prevent this in the future.

In Carwash's interview on ch4 today he stuttered through what seemed a good proposal, at first, about legal consequences for parents when kids get access to guns. Sounded like he meant "kids" who are "packing" like the murderer at First Friday. So, that is great, and WAAAAY past time, but, get R done, Carwash. I'm interpreting that Revrun THROWED is asserting that laws should make "parents", most likely no "dad", just a babymama, be accountable for once, and she would get some charges. Right after, he stammered on about some 6 year old in his family that found a gun laying around at home and fired off several shots, striking a relative.

He needs to get clearer and publish one of those EC from DC letters to explain better his proposals. HE IS HORRIBLE AT PUBLIC SPEAKING. This morning, I could read the faces of ch4's Alford and Eden during that segment with Carwash. They wore polite WTF visages.

Revrun THROWED was bs'ng, too, huh? That murderer at First Friday is EIGHTEEN!!!

Check out Flexy Body Babes. The Best of KC 2019! Nominate your favorites to celebrate the very best in the GalaK.C.!

^^^ Must be enjoying his pension and kickbacks.

2:56 -- it's acceptable for the minors in the Frogvilles....who respect life, love their families, know their neighbors, go to school, work the farms or other chores, AND would shoot someone ONLY for self-defense and protection of innocents...to have access to a firearm that they have been properly trained to use. Plus, city-living cousins and friends who aren't goofs may be wise to get some handling and target training from those rural kin.

Taking guns away from minors is the right thing to do. We have to do something and this is a good start.

We need to protect the kids in their doc marten urban hiking boots, new ripped jeans, yoga pants and leggings from the thugs so they can pretend Kansas City's urban core is a happy and safe place.

So currently the police just let the youth walk off armed? This is stop and frisk by another name. I'm all for it but then again I don't go out much at night.

Popos can't see the gunz in undies waistbands or front pockets when the oversized Tupac T-shirt is draped over the fronts of their baggy drawz! Pat searches will be necessary to try to get some of the gunz gone!

Better start to go after assault knives and those scary assault axes.

I'm shocked this wasn't already an ordinance. Props to the Mayor for trying everything possible.

^^^ it’s already law dummy, nobody is enforcing it because it would be racist.

Quinton is doing something, at least he's not blaming everyone else.