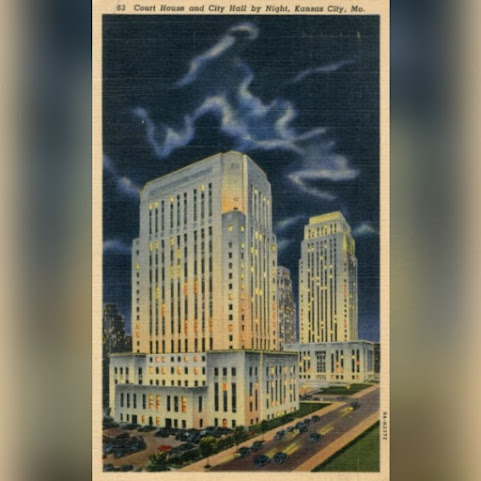 Many local residents might not realize that EPIC 12th & Oak municipal structures were both built around the time of THE NEW DEAL -- An ambitious government spending project that was pretty much this nation's first experiment with socialism AND might have saved the U.S. from plummeting into economic chaos.

Now the legacy of this town's prominence on the national scene is mostly forgotten as BOTH STRUCTURES FALL INTO DECAY.

Recently there has been an uptick in bickering about courthouse maintenance which we covered at the outset of the year.

Again, earlier this year both buildings were shut down because of water main breaks.

And so this begs the question:

How can Kansas City trust politicos to keep promises about improvements across town when they can't even maintain their own buildings???

Sadly, this turns out to be more of an existential question than a rhetorical one because politicos are good at shifting the conversation and most newsies return to the comport and relative luxury of suburban life at the end of their shift.

And so, tonight we lament KCMO government building falling to decay along with the rest of the city despite a new series of upbeat promises from new Mayor, Council and a bevy of NEXTGEN activists.

And this inspires our playlist for tonight . . .

Structural problems at the courthouse should shut it down. The elevator is really just a symptom of a building that needs serious repair. We're talking about tens of millions.

City Hall has a moldy smell through the entire year. I'm surprised more people who work there don't complain about it.

Ohio is better than Kansas City though.

The maintenance problems at City Hall are the very same problem confronting the entire city.

Look around at local streets and realize that we've seen this trend in every part of the metro and so far the only solution that's offered is to continue raising taxes instead of cutting spending and working on making government more efficient.

The buildings are great monument to what the government and people can do when they work toward a common goal. We'll never get that with the current White House that doesn't have any great vision other than turning back the clock.

.. But look at all the new Cadillacs parked in front.

12:29, nice try, but what do Kansas City's problems have to do with the current Federal administration? Yeah, that's right NOTHING.

Kansas City's problems are due to mismanagement and misappropriation of funds from 20 years of Democratic administrations.

2:25 nice trying to blame only the Democrats for buildings falling apart. I live in Topeka and have seen Republicans let the Docking State Office Building fall apart too.

Rural Lawyers in both States don't get elected to fix things, they get elected so they don't have to chase Ambulances down gravel roads any longer.

Party affiliation means nothing, Party philosophies are just talking points to use during campaigns, and the only question remaining involves which Party's nomination can I get that will let me pocket the most left-over cash at the end.

"Politics" is a splendid example of Capitalism in action.

8:14, "rural lawyers" are not responsible for maintaining urban buildings. Your comment has nothing to do with the subject of this post.

The Judge can't do shot about this problem.

I'll bet someone has some wonderful plans outlining new and shiny City Hall and County Courthouse. Bring on the wrecking equipment and put these two buildings out of their misery. KC is dead in the water. RIP

Everyone if you have any sense at all, BOYCOTT THIS BUILDING please. It is unsafe in many many ways, doesn't meet code, they don't care at all. Save yourself, be a voice for taxpayers and the public. BOYCOTT BOYCOTT BOYCOTT, seriously

Speaking of inability to maintain their own buildings (while still charging homeowners with code violations) is evidenced by 18th Vine (where pretty much every building except The Call has collapsed in one form or another), Southwest Blvd continues to flood, questionable sewer system (by way of lawsuits from the EPA).