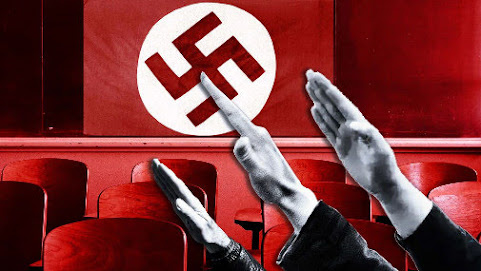 In schools across the nation, reports of antisemitism are on the rise.

So yesterday another middle-schooler approached my daughter and asked if she was Jewish. When she said yes, he gave her the Nazi salute.

I will not be quiet. I have not been silent when racist or anti-Semitic things have occurred at my children's schools. A few years ago, one of my girls came home with a hat that had the Confederate flag on it and I was not quiet about it. Another mom at the school called me out. She told me to "quit making the school look bad."

NEWS FLASH: IT'S NOT ABOUT THE SCHOOL. THIS ALL STARTS AT HOME. THESE KIDS LEARN THIS SH*T FROM THEIR PARENTS FIRST.

So yeah. It's happening everywhere. Your kids's school, my kids' school, Starbucks, nightclubs, kids in cages, this administration, all of it.

Teach your kids kindness. And teach them about racism, sexism, homophobia, antisemitism. Teach them acceptance and inclusion, not the Nazi Salute.

Thanks for coming to my TED talk.

"No updates to give. Principal was "not in" yesterday morning. I waited for 20 minutes or so, and was told email was the best way to get a hold of her. So I emailed (again) requesting a time to discuss last week's events. I still have not gotten a response. Waiting until noon today before deciding what to do next. In the interim, appreciating the support of you all, along with some other Jewish families at school."
########

I'm sure we'll see the regular shit show in the comments but this kinda thing isn't cool. A few trashy students give the entire community a bad name. Really disgusting and I absolutely agree. A sign that a lot of parents need to do better.

"I will not be quiet. I have not been silent when racist or anti-Semitic things have occurred at my children's schools. A few years ago, one of my girls came home with a hat that had the Confederate flag on it and I was not quiet about it."

It's kids lady, if you had any real problems you would ball up into a naked pile of sobs and tears.

It's certainly prevalent on here.

Good on this mom for sticking it to a worthless, little, entitled, wannabe Nazi cumstain.

Oh no!
Somebody did something stupid that I don't like!
Get the usual suspects out to all the JoCo city councils and DEMAND that they pass ordinances "protecting" whoever feels they might have had their feelings hurt.
A new "horror" is discovered almost every day!
Horrible, horrible!
What ever are we all to do?
You really can't make this stuff up.
Kind of like a 6 year-old "discovering" that they're really transgender.
The market for psychiatrists grows daily.

Have somebody give the kid a hammer and sickle lunch box with a Little Red Book to read at lunchtime. That should make Mom happy.

This does not surprise me. JoCo has degraded in its values and morals for years. Look who they just elected as a governor and a rep. Both Democrats...the party of anti-antisemitism.

Democrats are just evil. This kid's parents voted for Davis and for Granny.

^^and yet they easily kicked the shit out of their GOP counterparts. Weird.

Weird. I knew weird guy would come along. Weird. And yet I bet he is the same as pants shitter geezer diaper guy...weird.


YEP and guess who the anti Jews are????? Democrats yes that's right democrats and their ANTIFA terrorists. Just take a look at the biggest Jew hater of all....OBAMA!

But the Left is OK with anti Semitic Muslim Congresswomen.

For example, why should the Great Orange One need Netanyahu's permission to enter into direct talks with Iran???

Obama has not been president in over three years. Read a paper or something. What your doing is called deflection and it's a loser's lament. Meaning that you know you have no valid argument to counter. We see you Adolph, we see you!

Take your kid for a walk in an East Side park this week, then talk to us about racism (if you're still alive). Drink you JOCO cool-aid. You'll be ok.

^^Stay in your rented trailer in Frogville pops. Leave life to those of us actually in it. Go watch Matlock and post some more dumb shit on here before they cut your electricity off again!

Blacks murdering each other and bystanders several times a week?

Never mind, it's an SJW. A normal, pragmatic, sane question is racist!!!

As a parent, my course of action would be to find out who the student is that gave the Nazis solute (your son/daughter will probably know their name), look up their name in the school directory, call their parents, and explain what happened. The parents will likely be appalled and embarrassed. They will sit down their 13 or 14 years old without a frontal cortex and make them apologize to the student and hopefully have a teaching moment - "that stupid Nazis shit you just learned about in History class shouldn't be taken lightly, no one in your family has ever said anything like this, and there will be real consequences if you continue being a dipshit". Hopefully this would be a learning moment and everyone would be a better person for it.

99.99% of parents and students are not anti-Semites and it would be shame to cast a dark shadow over an entire school for the actions of a stupid 13 year old that probably has no concept of what his actions mean. That's probably the reason teachers complain about middle school students more than any other grade - the kids are at a developmental stage where they have no appreciation for their actions but can do/say some really awful things.

Thank you for coming to my TED talk.

I would say good for nothing geezers who do nothing all day but post moronic shit all day. That's more dangerous.

Don't you have something to say about Matlock? Come on, Chimpy, perform for us!!

The biggest anti-Semite sits in the White House saying there were good people in Charlottesville chanting 'Jews will not replace us'. Trump says Americans Jews are disloyal to Israel. He blabbed top secret Israeli intelligent to the Russians. He even said he only hire guys wearing yamakas to count his money.

The Democrats passed a House resolution condemning anti-Semitism when Omar even mentioned Jews and money in the same tweet when commenting about the APAC lobby and their contributions to control the GOP. You know who didn't vote to condemn anti-Semitic language? Yep, Republicans.

There is a reason Jews vote Democratic over 80% of the time. The GOP only cares about Israel as their Christian second coming prophecy. They are only tolerating Jews until Christ can return to the holy land and baptize them as foretold in Revelations. It's a sick motive. Ranting falsehoods about Obama doesn't hide the truth.

If I've said it once, I've said it 6 million times: Jews, get the fuck over yourselves ! Anne Frank-ly, that's all I have to say.

so fucking what, life is not fair or just. Tell your kid they will have to deal with people who they may find abhorrent or distasteful and move the fuck along.

Yay! Chimpy sings the hits! Frogville, Matlock, and trailer in one post!!

It's so much better when you stick to the little you know. You get your butt kicked all over the blog when you attempt originality.

If my kid did that salute they wouldn't be able to sit for a month their ass would be so read.

If it had been a black kid doing a Black Power hand gesture it would have been looked as Freedom of Speech. But is was a white kid being a jerk so it will be labeled a hate crime.

How many blacks have neonazis or KKK killed on the past, say, 20 years? Almost none? Got it.

How many blacks have blacks killed in the past 20 years?

Your "beloved Leader" gave permission for this idiocy when he called the Nazi Cosplayers "good folks" instead of pointing out to them that the Nazis LOST! BIG TIME! THEY GOT THEIR ASSES HANDED TO THEM!

So this "future fry cook" learned at home that the losers who were stupid enough to try to fight a two-front War against the two largest Countries in the World are some sort of "White Power" ideals, which gives you a pretty damn good indication how shallow a gene pool he or she comes from.

Want a good laugh? Google "George Lincoln Rockwell", founder of the American Nazis. Look for a picture of him wearing a Nazi uniform with the Confederate Flag sewn on the shoulder.
That'll give you some idea of these loons ability to "pick a winner"!

Who gives a shit. Nazi shit was so long ago no one here or involved in this directly experienced any of it or can stake any claim to it, especially since it happened 2,000 miles away. This is retarded outrage culture personified.

Any good parent would tell their child who had been "victimized" by someone else doing a body gesture how to deal with it and that there is meanness in this world. But now it's all about attention and being an attention whore for the internet because of some anecdote her fucking 12 year old told her happened at school. Fuck this mom and fuck anyone who thinks like that

I'm sure her voice will reach millions

Your sentiment is basically the reflective voice of what we have heard since Trump was elected,wipe those tears.

Your Ted talk had 5 male Uber drivers in the crowd.

Thank you for telling the truth.

Okay, so you literally have no argument and the bring up Trump out of nowhere. You must want his old cock in your mouth since he's always on your mind

Wow. Not even coherent. Just unhinged, desperate Trump Derangement. Do you work for the New York Times?

Once again school personnel get to deal with crap that has nothing to do with education. Yes blame the school for everything but never give them any credit for taking in all these shit-birds each and every day. Everyone needs to quit being outraged over EVERY LITTLE THING. Sure anti-semitism is terrible and doesn't belong in schools but middle schoolers are idiots that can't control themselves. Would any rationale, functioning adult go back to middle school if given the chance? hell no.

I know nazis are bad. But I think Hitler was so sexy. Weird.

The Nazis were really bad. Over 120 million died in WWII, it almost wiped out Russian and Poland. Find these kids, cut off their offending arm with a machette. Let them live the rest of their life with 1 arm. I am sick of this Nazi stuff. They killed my Uncle in WWII.

Yup! Anti-Semitism is a HUGE problem right now in America....you know...what with America's first Jewish President in the Oval Office and everything.

Screw U Nazianz birches. Absolutely agree with this woman defending her children!