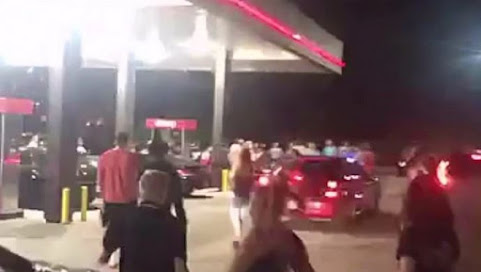 A low-rent local crescendo to the Summer season of violence that offers a demographic fact check or at least an alternative perspective regarding local youth violence . .

Fox4: No arrests made in wild brawl caught on camera at Kansas City QuikTrip

A large group of car-lovers were caught on video showing no love to each other at a Kansas City QuikTrip over the weekend.

Quite the opposite, in fact.

Early Saturday morning, a large group started fighting and throwing punches at the gas station. After a brawl in the parking lot, the crowd of dozens swarmed the inside of the store on Front Street . . .

QuikTrip spokesperson Mike Thornbrough told FOX4 the incident was "premeditated" and that they've never seen anything like this before at a Kansas City location.

Hey now, the next generation of trailer park residents need to let off some steam.

It could be worse.

At least they're not doing meth.

i doubt if geezer hater was among them. Brawling might mess up his man bun.

Another one of Mike Thornbrough's magnificent contributions to KCMO culture.

Geezer hater's man bun is only useful as a saddle cock in case he starts bucking when his boyfriend is fucking him in the ass.

Mike sure doesn't get around to the stores much does he?

Nope, and he's sure as hell never been in NKC at the QT on Armour Road when a group of Blacks from the High School "swarm" the place and steal hundred$ of dollars worth of crap.

At least nobody pulled a gun but why does QT allow large gatherings like that in front of their stores. .

9:17 that's a hell of a good point and I brought that up to a QT dist manager and they claim all their stores are safe places blah blah blah and so forth. They think running people off will hurt their business when the idiots fail to see it will help their business. If they are going to say and post signs saying their places are "Safe Places" then they need to be just that.

Hell maybe a class action civil suit for false security against QT is needed. You all think it's bad around here go to Oklahoma it's even worse yet at their stores.

Geezer hater, weird boy, copro boy has faded away.
A Sly troll who attacked any who dared to criticize Sly or Killa City. Quinton will be a fool to hire him.
He will fit in well with Jeff Roe's slime operation.
Speaks loudly for Sly's dislike of free speech and US Constitution.
Does Cordish allow this in Baltimore?

QT is open at all hours. They aren't the issue. This is a street racer issue that has been going on unchecked for years. Silly antics by silly people. Dangerous to some.

What amazed me was the QT employee NOT locking the doors and allowing the combatants into the store. Oh, and they picked up a few things while they were there - ha ha.

KCPD is useless.
Not even worth a phone call, better to settle it on the streets.

I stay away from QTs and 7-11s and the rest of the "convenience stores." Always and everywhere. These places don't attract the best clientele, know what I'm sayin? You get your lower orders, your lower lower orders and your bottom of the barrel types. No way.