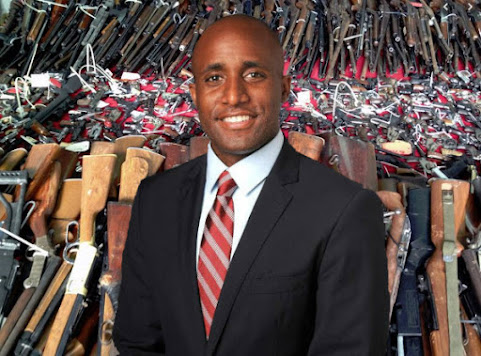 If Kansas City voters were looking for new ideas from City Hall about preventing gun violence, they're out of luck.

MAYOR QUINTON TALKS ABOUT RESTARTING GUN BUYBACK PROGRAMS TO PREVENT KANSAS CITY VIOLENCE!!! BUT DOES KANSAS CITY HAVE THE CASH TO EVEN MAKE A DENT IN THE EPIC SUPPLY?!?

Back when this program was first started, the proliferation of guns in the U.S. hadn't really started.

The United States has anywhere from 270-300 million guns. Americans alone own 40% of all guns in the world, more than all civilians combined in 25 other countries. The latest estimated number of civilian-owned firearms in the US was 120.5 guns per 100 residents, meaning there were more firearms than people.

The mayor said he'd like to bring back some form of a gun buyback program, last implemented in Kansas City in 1994.

“I know that doesn’t do everything but, frankly, what we have right now is a supply issue. It’s too easy for people, I think, to get firearms very quickly, particularly in the urban core of Kansas City,” Lucas said.

'You bring your gun, we ask no questions': The history of gun buybacks in Kansas City and Missouri

Of course it will work to create more jobs for activists and neighborhood leaders.

At least they'll be off the street and not getting into trouble. That's actually a good thing.

Will it reduce violence?

At least there was pizza. Everybody likes pizza.

The rates they give at these gun buy backs, you might not even be able to get extra toppings.

KCMO has no money for infrastructure or basic services but money is available for a buy back. Something not right here.

I bet only broken guns get turned in. Or maybe Hi-Point pieces of shit

I doubt the criminals will be lining up. Most will be law abiding gun owners looking to make some extra cash selling guns they haven't used in a long time and have no collector value.


O.K. we have another stupid in town! Does he really think the criminals are going to turn their guns in for a little money?

Will solve nothing, nothing at all. Just another feel good option from 12th and Oak that won't solve a thing.

Give KCPD that money instead and simply say to the officers, "Hit the streets and do some real police work, stop and frisk, search vehicles and make arrests. The people are screaming for law and order and a stop to all the killing so let's get out there and do our jobs.'

But of course that won't work because if real efforts to reduce killings and murder were to take effect those yelling about gun control would soon be yelling for police control. Nuts like Byron want to take away your guns and don't want the criminals who are doing the killing to have to be messed with over silly things like laws and obeying said laws.

Lucas is going about this all wrong. Let take Johnson county for an example. They rarely had a murder or shooting take place there until you know who started all moving over there. Now I bet you already know that the golden ghetto has as many guns in it as KC does. JOCO is full of avid hunters and sport shooters.

You can't fix the problem till you really identify what the problem is. It's easy to do Mayor Lucas, look at who is doing all the killing and you have your answer and it sure isn't a gun doing it. Those doing the killing just use a gun to make it happen.

This is just political theater.

How much are they buying them back for? that's the real question. If it's above market value it might motivate some people

Hey Government, protect us by securing the borders. Don't try taking our guns until we are completely safe.

last saturday, I had 3 drivers on i-35N between 12th street and 20th st cut across two lanes, last second, not to miss their exit. i chased the 3rd one. Why? because it happens all the time and i had it.

how many times and how long do you have to be stopped at a stoplight in KC for zero passing cars before you feel like an idiotic chump being grossly manipulated by a crappy timer.

You must not know shit about anything. The cops hand you a walmart gift card around $50-100 for a $1200 AR. The buyback value is absolute shit. Nobody is making any money on it.

beware of the pick up truck full of nuns and cantaloupe.

How can government buy back something they never owned?

Great job batman! You are doing your part to land your ass in jail. Will be glad to see it!

Would have hoped he was more creative than this. The idea is old and didn't work back when they first tried it. If this is the best Quinton can do, we're screwed.

We were screwed either way. At least Quinton's ideas aren't as laughable as Jolie's.

I don't see any of you dolts coming up with any better ideas. Just fantasies that take you out of your loser lives.

No surprises here.
You just had to know that this "new" effort would consist of pretty much ANYTHING other than identifying the actual problem and addressing it.
Just another "program" that will waste millions of tax dollars.
$25,000 "rewards", because you have to pay people to cooperate with the police when they're trying to clean up your own neighborhoods.
And now who knows how much more money to "buy back" weapons that will quickly be replaced and used to generate more bucks for the bad guys.
Lucas already needs a spine transplant just like the rest of the KCMO "governing" crowd.
Sad.

So they want to reward criminals with cash for guns that could be stolen?

The police depts that do these programs keep the guns, why would they need several thousand more guns? Sounds like the gubmint is planning a takeover of the citizens.

I think Q has this all wrong. There isn't enough money in Kansas City MO to get enough guns out of criminals hands to do any good. Here is what he should do instead.
Drugs for Guns! Yup, give away pot for guns! You can make a deal with the medical marijuana industry to supply you with enough second rate pot to give a baggie full of it for any gun, two baggies for semi-automatic hand guns, three baggies for rifles, five baggies for AK type weapons, and ten baggies for a box of hollow point ammo. Since you plan to pardon the mary-Jane users anyway they can get their pardon papers at the by back too. Take advantage of the synergies! That way they would have to sell the drugs to buy more guns thus violating their gun buy back agreement and you can arrest them for sale of drugs and send them to prison. Problem solved!

It's just a matter of time until a president declares a national emergency & starts taking guns by force. One way or another, America must disarm.

Our present path is unsustainable.

^^^The National Emergencies Act would not authorize the government to take guns by force, no matter whether it was declared by the President alone or by Congress as well. Your wish might come true only if the President were to declare martial law, ideally with Congressional buy-in, but that is at best arguable.

As soon as Mayor Lucas successfully buys back all the guns in the inner city, the whiny reverends will start complaining about a gun desert, and won't be satisfied until the City provides funds a gun store in the hood.

It's just a matter of time before Byron is in jail for the fraud he is committing. Then we will see how he likes living with those he claims to honor.

^^^I doubt it was actual fraud. Most likely he just found a Santa Clause SSA hearing examiner who gave total disability ratings out like dentists give out toothbrushes: to all comers. He is certainly not totally disabled (can't work in any occupation) if he can read and post comments, and (especially) pick out all the fire hydrants on Captcha.

Unfortunately, being a government agency and therefore miserably inefficient, the SSA almost never checks to see whether its total disability beneficiaries are still (if they ever were) totally disabled.

So he's safe. Unethical, immoral and unmanly, but safe.

Scuba diving in Troost Lake anyone? There's millions to be made.

Gun buyback is a sidestep. Quinton cannot do what would definitely help, which is to practice appropriate law enforcement in the affected areas.

Like asking a ho to turn in her veejay. It’s what they earn their spending money with. Of course base income comes from the 47% that pay federal income tax.