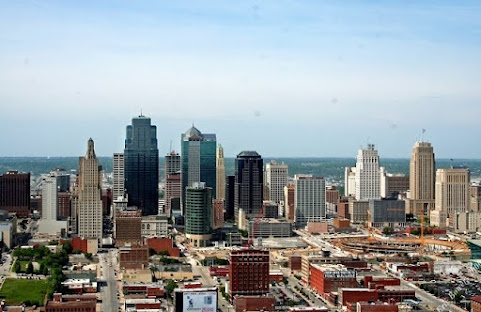 We're always, always trying new things when it comes to providing a bevy of information for our blog community and right now here's an EPIC overview of mostly bad local news that's still worth a glimpse for our most dedicated newshounds . . .

KANSAS CITY, Mo. - The Kansas City Police CSI team has been working for three years to bring gunshot reconstruction to the crime lab. Forensic Specialist George Santoro said they had to answer, "One, can you tell whether something was going in or out from a surface through various calibers of weapons and various materials?

Without a high-profile race for governor or Congress, the Johnson County, Kansas primary elections are usually on the sleepy side. Not so this time around as controversies have made even the community college's open seats on its Board of Trustee highly contested. Reporter Jay Senter offered insights on that and other races highlighted by lingering issues.

Independence, Missouri, police have released more video of suspects involved in a shooting and attempted robbery at Gates Bar-B-Q on July 15.The new video shows three suspects attempting to cover their faces as they enter the business in the 10400 block of East U.S. 40 Highway around 2:45 a.m.

KANSAS CITY, MO (KCTV) - A Kansas City man was sentenced Tuesday for taking pornographic photos and video of a 7-year-old girl. 46-year-old Dennis Lamont Everette was sentenced to 15 years and four months in federal prison without parole. The court also sentenced Everette to a lifetime of supervised release following his prison time.

Hide Transcript Show Transcript KMBC 9'S KELEIGH GIBBS SPOKE WITH THAT MOTHER TODAY. >> HE WAS A GOOD KID HE WAS A GOOD FATHER. MARCH 26, 2012 24-YEAR-OLD CHARLES BATES WAS MURDERED. POLICE RESPONDED TO A VEHICL WITH THE PASSENGER DOOR OPEN A 80TH AND BROOKLYN. BATES HAD BEEN SHOT.

KANSAS CITY, Mo. -- The Federal Bureau of Investigation said a sex trafficking operation in July led to the recovery or identification of more than 100 minors, including two from the Kansas City metro area. The "Operation Independence Day" sweep also led to 67 suspected traffickers getting arrested, and initiated 60 new federal investigation according to a news release.

KANSAS CITY, MO (KCTV) -- A judge sentenced a Raytown man to 26 years in prison for the fatal shooting of a woman and three others in 2016. Deandre Jackson pleaded guilty in June just before his trial was set to begin to ten felony counts in connection with the shooting.


Faith Technologies to add more than 700 jobs in Olathe expansion

OLATHE, Kan. -- Faith Technologies and Excellerate Manufacturing announced an expansion in Olathe that would ultimately add more than 700 jobs to the area. The company announced Tuesday that they purchased the warehouse location previously belonging to PacSun, located at 21800 W. 167th St.

No Chance In Kansas

TOPEKA, Kan. (AP) - A conservative commentator says he is joining the race for U.S. Senate in Kansas. Bryan Pruitt said Monday he will return to the state from Washington, D.C., for what he acknowledged is a "long shot" bid for the Senate seat held by retiring Sen. Pat Roberts.

ConceptionAbbey.org SOURCE: ConceptionAbbey.org A Benedictine monastery in northwest Missouri has released the names of eight priests or brothers who had credible allegations of sexual abuse of minors made against them.The Conception Abbey said on its website Monday that seven of the priests are dead and the eighth was removed from

TOPEKA ― One of the key players in Kansas' privatized Medicaid system was put on notice Tuesday that it's failed to live up to its contract. Aetna Better Health has until Wednesday to tell state officials how it will address chronic complaints, including that it doesn't pay hospitals, doctors and others on time or in full.

We are two weeks into Kansas City Chiefs training camp, which means it's time for preseason football. The Chiefs will host the Cincinnati Bengals this Saturday at Arrowhead Stadium for their first matchup. The starters should play for a drive or two, but the bulk of the game will consist of backups and players fighting for the few available roster spots.