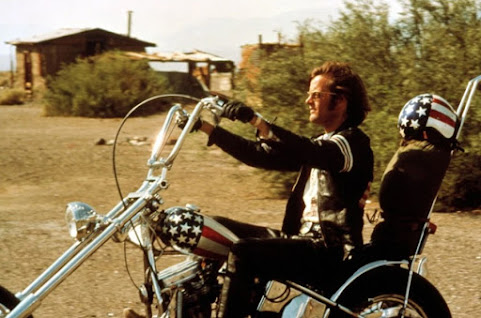 Chuck is a favorite of the TKC comments. His ideas are often highly regarded, regularly disputed and occasionally misinterpreted.

For Sunday, he shares a very thoughtful perspective on the passing of an American icon along with his perspective on pop culture and the inevitability of change. Checkit:

Chuck: Peter Fonda pushed me into the counter culture, the 60's and motorcycles.

I sold my last Harley 12 years ago. She was a modified "Midnight Rider". Too quick for me in my old age (At that time about 57). Not like a Japanese bike, but, still, quick as hell. One night I was in my cups and took a turn a little too fast and almost bought it on the "High Side". The next day, I listed it for sale and some Native Americans from Haskell showed up with $10,000.00 and rode off into one of the darkest and loudest summer thunderstorms I have ever seen. Supply your own metaphor here.

Everyone who owns a motorcycle gets hurt. Some..., actually, many die. I spent decades in the wind. All of us, that I know of, received for our enthusiasm, cuts, bruises, burns and broken bones. I had my teeth knocked loose after flying 15 yards over and past a station wagon on Hampton Blvd. in Norfolk Virginia. The lady "Didn't see me". My most painful wreck, was on Longview Road in KC Mo. where my heel was crushed against the crankcase of my Harley my Achilles tendon was severed. The bike ended up on it's back, upside down on the handlebars, still running. Butterdup, butterdup, butterdup, butterdup". Gawd it pissed me off I couldn't get to it and shut it down. Priorities.

"Easy Rider" was my favorite movie for many years. It is still a great American classic, that, while shamelessly promoting the obvious stereotypes, overcomes it's lack of intellectual heft with atmosphere and a dissociative performance from Fonda that seems surreal to me, even today. His character, "Wyatt" is described by critics as "Laconic" and if there is any strength that Fonda relies on during his entire career, it is his economical and underplayed efforts in front of the camera that I remember. Here, in his best effort, the sideways glance, the pause, the inflections, the mystery of the character he plays is all the more brilliant, cast against Hopper's predictable, extemporaneous, over the top execution.

"Easy Rider" ushered in that "Counterculture" as we knew it and remember it today. In his dotage, Fonda, ever the rebel, still railed against the perceived enemies of the left. "The Man". His sister Jane, one the greatest beauties Hollywood ever produced, famous for consorting with North Vietnamese Gunners as they took aim at American pilots, was and is, a Hollywood icon known for her Liberal views. The Fonda family became, "The Man". Their power and the power they and other famous people in Hollywood wield moves people toward establishment views. People don't change, the world does.

My Father, Mother and brother all hated Peter and Jane Fonda, yet, were Kennedy loving, dyed in the wool Democrats unto death.

I was as Liberal as the Fonda's , read the books, saw the movies, wore the leather jacket, rode the Harley's and bled blue, until I didn't.

In the last scene of the movie, "Captain America" (The Motorcycle) is seen disintegrating into flames as she spins into a riderless "High Side" crash.

People don't change, the world does. Peter Fonda became "The Man" and never knew it. HE was the establishment when he died.

People don't change, the world does.

Truer words have never been written, thanks for the words Chuck. An excellent and fitting obit.


People do change hate to be the one who tells ya that. It might be your tribute to Peter Fonda but not this Kansas Citian.

There’s nothing more fun in motor sports than riding a bike ,I rode for 30 years on the street never wrecked luckily the only thing I ever worried about was getting hit from behind by a drunk nigger at a stoplight that’s the most dangerous thing of all

We just need Hanoi Jane to kick the bucket now.

Down by the river's edge.

Dennis Hopper would know, he played "Feck" in the movie.

Samson : You were a biker.

Feck : Yeah, years ago. Oh, man. I ate so much pussy in those days, my beard looked like a glazed doughnut.

The Corvair was banned as "unsafe at any speed". So, why wasn't the motorcycle banned.

People do change, if they want to. People are not carved in stone.

Byron, I am still alive. Reading this at the shooting range here in Texas where my skills are improving. Can't work in St. Louis anymore because of ethnomasochistic, self-loathing liars like you, but, I am hoping to land a job in West Virginia.

In my opinion, if chuck had written an apotheosis/eulogy for Louis Farrakhan after his death, you would have bitched like a little girl about that too.

I will be working the meth lab circuit in your neighborhood buddy, hope to see you soon.

Peter F__k was a violent liberal pinko. Screw him and his traitor sister. Suck nuts in hell Pete.

Yeah! Tony Botello features a known white supremacist on his blog! How's that gonna work out for you I wonder? OK only if you only plan on running this shithole blog until you die.

Can that possibly be misinterpreted?