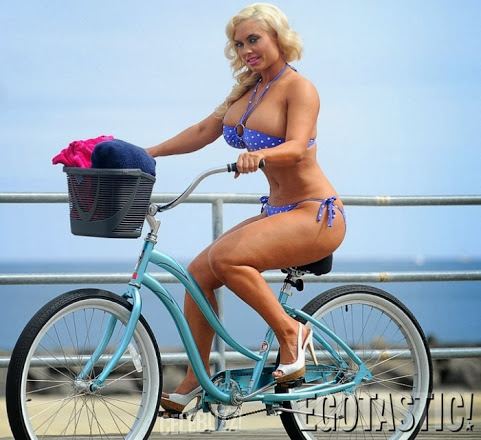 With respect to CoCo Austin and her iconic curves along with her love for sustainable transit . . .

Yesterday we had a pretty good discussion about the adventures of 4th District Councilman Eric Bunch and his controversial fight with a motorist.

Some of you d-bags had so much "fun" that it inspired the council dude to pout via Twitter to his fellow hipsters inside his bubble. Not a big deal, dude seems to be going through some "issues" if he's fighting with strangers on local roads.

Some solutions that were advocated . . .

- Make pedestrians and cyclists the priority for creating new streets so that we can share conversations and glances with strangers.

These are all interesting ideas but the only trouble is that there's no debate or challenge to the faulty premise that all drivers are angry and they "dehumanize pedestrians and personify cars." To be fair, one of the panelists noted that stereotyping all drivers was unfair but his comment was quickly dismissed.

Councilman Eric 'Spandex' Bunch apparently has drank too much of the kool-aid.

Dibs on her bicycle seat LOL

Sure, let’s spend 500 million to make some douche bag asshole bike riders happy considering they only have at most 180 days of weather good enough to ride, screw the real people who need the streets for 365 days a year in all weather.

Let me add this to my above statement, the percentage of hardcore riders is probably less than 2% of the entire metro area, 1.7 million non riding people against 5000 if there is that many, screw them

Mehinks he doth protest way too much.

Ah the famous KCMO "Loyalist" Bob Specht who moved to D.C. is chiming in on that tweet.

Hi Bob! The swamp is an appropriate place for you. Thanks for leaving!

Mr. Bunch better call the Wickham-James firm for advise on how to deal with cave people and others who demand answers and ask hard questions.

Bunch would be more then happy to take $450 million of taxpayer money for his idiotic ideas.

Speed bumps seem effective.....and cheap!!!!
The unexpected shearing of the oil pan on one of the brother's Caprice at high speed would be just wonderful.

“Let me add this to my above statement, the percentage of hardcore riders is probably less than 2% of the entire metro area, 1.7 million non riding people against 5000 if there is that many, screw them”
Couldn’t agree more!

Armour Spandex Road in NKC is now fucked up. Wonder who cashed in on that?

I have never seen a bicyclist on their cell phone. Can you say the same about car drivers and pedestrians ? Phones are the root of all of this. The GPS should shut phones off if moving over 3 mph.

6:21: I've seen cyclists on their smartphones. Open your eyes, guy.

Is Eric the brother of the character Rebecca Bunch on "Crazy Ex-Girlfriend?" Isn't there a loosely tethered former local actress named Bunch?

Due to the condition of KC roads, 25 mph is standard already.