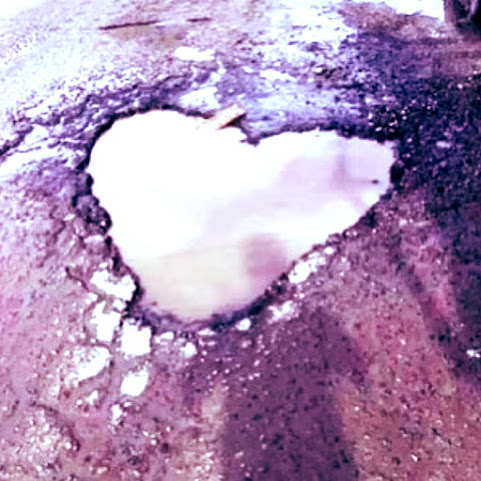 The longstanding heart-shaped pothole in Midtown should remind our blog community to be careful on local neglected roads in order to make it back to the people whom they love . . . Accordingly, here's a roundup of recent tragic traffic tragedies. Checkit:

Five people are injured after a multi-vehicle crash in Kansas City, Missouri on Saturday night.Kansas City police say that a white Dodge Caravan was driving southbound on Wornall Road just before 10 o'clock Saturday when it crossed over into the northbound lanes.


One killed, three injured in I-70 rollover early Sunday

KANSAS CITY, Mo. - One person was killed and three others injured in a rollover crash at I-70 & Stadium Drive early Sunday morning. KC police say a green Hyundai was traveling west on I-70 at a high rate of speed through a construction zone about 12:23a.m.


Motorcyclist killed after going off the road in Olathe


Uber and Lyft drivers reveal the hardest parts of their jobs

We asked Uber and Lyft drivers the hardest parts about working for the ride-hailing platforms. As you might expect, sitting for long hours, and not having any coworkers for juicy office gossip can get old. Drivers also have a unique vantage point to the city that other workers might miss.

New Caddy Made In Kansas City

There was a day when a Cadillac had to be as big as a cruise ship and loaded down with enough chrome to make a knight on horseback feel inadequate. No more. Cadillac has decided that affordable luxury with interesting styling is the way to get post-boomer buyers.

When the marriage counselor asked what caused the pothole in their relationship, she said he was inches short and crumbled under pressure, while he said it was clearly her "ass-phalt"!!!

I love the Caddy SUV. It does look like every other SUV on the road today. In fact, the only way to tell the difference is to look at the badge.

Don't drive for Uber or Lyft. It's not worth the money when you figure the wear and tear on your vehicle.