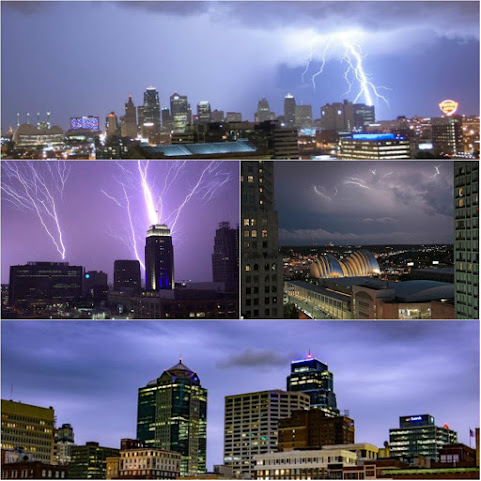 Weather events dominate the local news scene tonight and so we take this opportunity to drop more than a few news items that are worthwhile and deserve a peek from our most dedicated readers . . .


Local man makes sure music is part of students' curriculum

KANSAS CITY, MO (KCTV) -- As the school year starts back up, a Kansas City man is making sure music is part of this year's curriculum. Music instructors say it is important that children learn how to play an instrument. Studies show music education helps students in many different areas of their life.

KANSAS CITY, Mo. - Ricky Kidd had his headphones in and was working out Wednesday afternoon at the Western Missouri Correctional Center in Cameron, Missouri, when he was summoned for the most important phone call of his life. He didn't hear when the correctional officer called his name.

Despite complaints from numerous residents at Englewood Apartments, management at the Northland complex repeatedly does little or nothing to make basic repairs and perform routine maintenance, a resident says. As Kansas City voters mulled whether to approve a new inspection program for the city's rental homes last summer, Councilman Dan Fowler took a tour of Englewood Apartments and was appalled by what he saw.

NORTH KANSAS CITY, MO (KCTV) -- The man who runs a North Kansas City used bookstore is upset. He's worried that his collection of rare books will be ruined because part of his roof is literally falling on him, which is all because a new building owner allowed construction crews to start fixing the roof before he could move his business.

OVERLAND PARK, KS (KCTV) - KCTV5 New sat down with one of Sylvia's friends who lives in Kansas Tuesday night, and Wednesday we spoke to her longtime friend who lives in Arkansas. Both women said they had the same worries about Charles Pearson.

Community News Conversation
Periodically Buzzed
Sounding Off For Good Cause

Hide Transcript Show Transcript HOLDING A SHINE A LIGHT N.F. WALK. IT'S SATURDAY, OCTOBER 5. AT 8:30 IN THE MORNING AT PENGUIN PARK. ON NORTHEAST VIVION ROAD IN KANSAS CITY, NORTH. A MUSEUM IN KANSAS CITY KANSAS IS IN DESPERATE NEED OF REPAIRS, KMBC 9'S MATT EVANS SHOWS US.

SHAWNEE, Kan. - You've heard of raising the roof, but how about raising the bowl? Last week, crews working with WaterOne - the independent, public water provider in Johnson County - placed a bowl atop a new 110-foot water tower. The tower is on Johnson Drive, west of Interstate 435 in Shawnee.

Show-Me No Remorse For Panic


Armed man stopped at Missouri Walmart said it was bad timing, has no regrets

SPRINGFIELD, Mo. (AP) - A man who walked into a Missouri Walmart with loaded weapons and wearing body armor acknowledges the timing was bad but says he doesn't regret his actions. Dmitriy Andreychenko, 22, is charged with making a terrorist threat after the Aug. 8 incident at a Walmart in Springfield.

KANSAS CITY, Mo. - The husband of a late Missouri state representative has announced his intention to run for his wife's seat. Rick Roeber, whose wife, Rebecca, died July 30 on a family vacation in Colorado, announced Wednesday that he will seek her open seat in in the Missouri House of Representatives.


Rounds of storms expected through Saturday

Hide Transcript Show Transcript NOW IN FIRST ALERT RADAR. BRYAN: THAT IS TRUE. THERE WAS STILL LITTLE BIT OF A TORNADO TOUCHING DOWN EARLIER. LOOKS LIKE THE HEAVIEST ON THE KANSAS SIDE. STILL SOME ACTION WITHIN THE 435 LOOP. MORE REDEVELOPMENT. THERE WERE PROBABLY BE A LINE OF THUNDERSTORMS MOVING THROUGH, ONE AFTER THE OTHER.

WASH THE LIBERAL SCUM OUT OF THAT GHETTO!

Hopefully more in the morning

Talking to yourself again? Sad. And weird.

Where is the outrage at the prosecutors to blame for wrongly convicting Ricky Kidd in 1996.
Details please KC Star. Was Peter Baker and/or Mikey Sanders involved in corrupt prosecution?
Sanders was only an assistant JaCo prosecutor, so he cannot claim all the credit for this false prosecution.
Does the Star protect and "comfort the comfortable while afflicting the afflicted."

The prosecutors did not convict Ricky Kidd, a jury did.