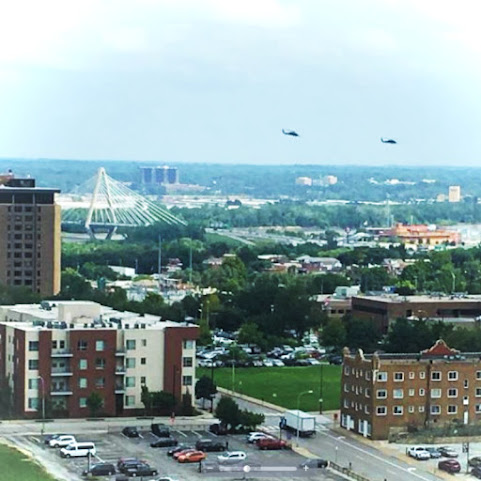 First and foremost, special thanks to our blog community for a nice TKC Reader submitted photo of continued military training exercises over Downtown Kansas City that we've heard all of Friday afternoon.

"This pair JUST flew past city hall and then around the federal courthouse," said a trusty TKC reader who was quick with the cam phone and unrelated to more skeptical readers.

And so, whilst we realize that the current heli & drone flights over Kansas City have been explained to locals repeatedly by way of low-key messages that seem to hope residents will politely stop asking . . .

To be fair, some might call it an assurance.

Here's the word along with suggested links . . .

"Think about it TKC. We're now ranked as the 7th deadliest city in the nation according to a national broadcaster murder map. The sounds of gunfire are commonplace at night. There's also rampant corruption among our elected leaders. Is this military training? Sure, but for who? We all know late August is usually the most deadly month for KC so military helicopters overhead are sending a very clear message about who is REALLY in control and the resources they have at their disposal. Some might say this is a strong-arm tactic but let's not deny that communication is implicit in every government action . . ."

After that there's a few more good insights about bitcoin and drinking water that we'll save for later . . . And again, it's important to note that very many people, if not the majority, feel more secure during military exercises in KCMO that earned mostly minor reporting but have, nevertheless, captured the imagination of Kansas City residents online.

New way to say have a safe & fund weekend?

Some of us grew up on or near military bases. This is the Midwest. The sights and sounds shouldn't be unheard of. I've seen the curiosity and think Kansas Citiians are getting to soft nowadays.

^^^ They don’t want their good stuff getting shot up!

Uh Oh. Better call Wickham James Strategies & Solutions and find out what the hell is going on here!

Trump sending a message to KCMO if you want your toy train money you better clean your act up.

I wonder if Mayor Q did a ride along. You know aviator helmet and flight jacket looking out the chopper door at all the carnage he's inheriting.

This town could use a few good strafing runs.

they're training for urban warfare. you think they wont use that training on their own citizens?

Practicing riot control when the assessment debacle's fuse hits the powder at the end of the year and the bills arrive and half the population realizes they are going to be homeless.

5:26 so lame, do better. They could be looking for your black panther extremist, you know, the real racist group in killa shitty.

5:31--Citizens? Ya mean, like the shooters, looters, arsonists, and assaulters that rushed into the supposedly peaceful marching and protesting crowds in Ferguson, Baltimore, Chicago, and such? When shouters and marchers give way to bricks and bullets, fists and fires....THEN, IF YOUR GOVERNOR IS NOT A WIMPY JAY NIXON, UNCLE SUGAR IS MOST LIKELY OPENING UP GIANT CANS O' WHOOPASS!!!

There sure are some dumb people on this blog.

Seems unsafe to do a bunch of low altitude joyrides above heavy populated areas especially at might. Gov't intelligence at work. If you like your airspace, you can keep your airspace.