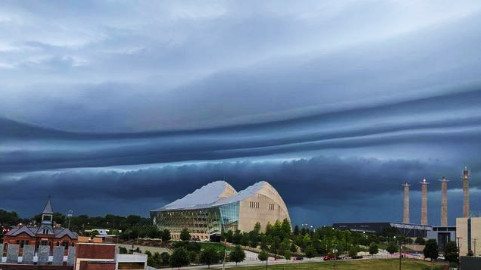 A nice stolen shared photo floating around the local Internets inspires us to share a torrent of Kansas City news links also worth a quick look . . .


'It's A Killing Machine': Woman Takes Friend's Assault Rifle And Wants To Destroy It

KANSAS CITY, Mo. (CBS Local) - In the wake of mass shootings in El Paso, Texas, and Dayton, Ohio, a woman in Kansas City is taking action. Sandy Skaggs said she has been storing an assault rifle for a friend who owns it. "I don't even like touching this thing," she said.

Hide Transcript Show Transcript ONE OF US CAN LEARN FROM WHAT HAPPENED. THERE WERE TWO MISTAKES MADE THAT LED TO THE ACCIDENT OVER THE WEEKEND. FORTUNATELY NO ONE WAS SERIOUSLY HURT. TAKE A LOOK. THIS IS THE INTERSECTION AT 137TH AND METCALF IN OVERLAND PARK SUNDAY MORNING.

Pave The Way For KCK NextGen

KANSAS CITY, KS (KCTV) -- It's back to school for some elementary students. Many students may have a safer walk to school thanks to summer sidewalk developments. Kids who walk to school can find brand new sidewalks where there was only a shoulder before. Public works has slowly been phasing in improvements around schools since 2007.


'It is utterly ridiculous:' Eastside neighbors frustrated with dumping on private land

KANSAS CITY, Mo. -- City inspectors say trash and junk piling up in a far east side neighborhood is not a case of illegal dumping. The mess at East 31st Street and Stark Avenue has left neighbors frustrated. For more than a year, homeowners say they've watched trucks and trailers dump garbage and bulky items at a home on the block.

KANSAS CITY, MO (KCTV) -- After a weekend full of violence one family is choosing to focus their attention on something positive. Dwane Simmons was a Washburn University football player who was shot and killed at a party back in May. Simmons' father says his sons high school football field holds a lot of memories for him.

KANSAS CITY, Mo. - A woman's dog escaped and was then shot to death. A neighbor said he saw who did it and that stranger was just trying to help him out. What actually happened Wednesday could be somewhere in between.

Perkins & Marie Callender's Inc. has once again filed for Chapter 11 bankruptcy, and just like in 2011, the Kansas City market is part of a round of closings.

Parson and the GOP are fiddling while Missourians get tossed off the Medicaid rolls by the thousands each month. Last week, Missouri Governor Mike Parson said in an interview that he's been hesitant to look for ways to expand Medicaid in Missouri because he thinks the state needs to fix its broken system first.

JEFFERSON CITY - State Auditor Nicole Galloway Wednesday criticized Attorney General Eric Schmitt over his silence on whether the governor and state agencies may cite the First Amendment to redact public records. In a statement, the Democratic auditor said Schmitt, a Republican, is charged with enforcing the state's Sunshine Law.

Elementary school students are getting help to becoming lifelong readers thanks to the Lead to Read program.

Shhhhh, bLIEron, Great American geezers and night shifters are napping about now. All other Great Americans are at work or on lunch break. Posts will ramp up in an hour or two.

What a depressing shot.

I guess Tony is saying, what happened today is so damn boring, he just poured 15 stories into one MegaPost. And we are supposed to comment on one or tw0 items, which won't make sense unless one is autistic or has OCD.

I'm just waiting for the Mahomes cereal to be back at Hyvee. which was NOT one of the stories, so don't scroll to find it.

This town can be dull.