KANSAS CITY CONFRONTATION: WHO WOULD WIN A FIGHT BETWEEN CLAY CHASTAIN VS. PATRICK MAHOMES?!?! 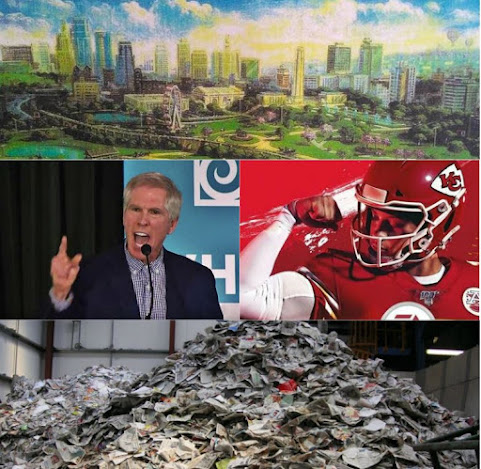 In this latest missive, Kansas City's most prolific transit activist and the only guy to win a citywide transit vote attacks at beloved rising star hero and the local news discourse . . .

Woe is everywhere, and so is Patrick Mahomes

I have nothing against Patrick Mahomes II, but with people suffering in Kansas City and all over a suffering planet why is Kansas City's local media obsessed with his... new mansion, obscene pile of shoes, new diet, new non-nutritional breakfast cereal, his every move or pass, etc.?

But when it comes to City Hall's deliberate and on-going attempts to ignore valid petitions from the people, Kansas City's local media is too busy to cover those misdeeds against our collective civil liberty. Kansas City's local media is no longer the people's watch dog, but mostly just a reporter of crime, sports, weather and sensational-oriented stories. For instance, if one goes to the Kansas City Star's web page, at any given time, there is little content about local politics. Rather, it is all about crime, sports, mayhem and the national scene.

And, of course, with no watch dog City Hall is free to bend, break and ignore the rules to suit its purposes. For instance, 2,500 KC voters submitted a transit-improving petition (similar to the one KC voters approved in 2006 and that City Hall said they knew better and repealed) to the City in early April. It is now the middle of August and the City has not acted to place the petition on the next available ballot - November, even though they long ago placed the Save the Paseo petition on the November ballot. Rather, they have sent it off to Siberia (bottled it up in committee for 6 more months) to be forgotten.

Mayor Quinton Lucas promised the people an open transparent government. Where is it Mr. Mayor?