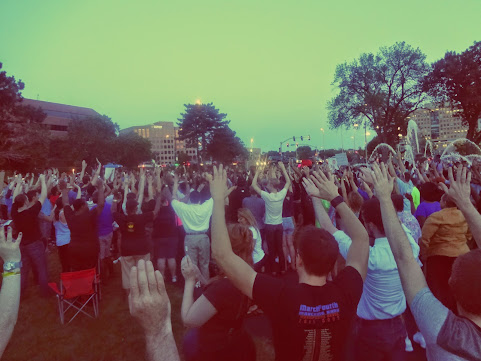 Half a decade ago, Kansas City protested the officer-involved shooting death of Michael Brown  non-violently whilst across the State there was a racially charged series of riots that signaled the start of an increasingly divisive social media culture war epoch in American politics. 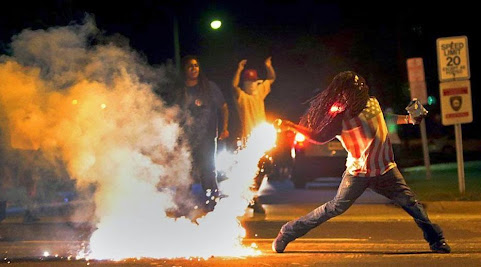 For TKC, the chips guy throwing tear gas was the most iconic image of the debacle and it's weird to note that the urban legend is now mysteriously dead along with a lot of other activists from this tenuous moment in American history.

At the time many locals feared the spillover of rioting into KC but it turned out that our local murder rate is far more insidious, slow and steady.

Nevertheless, it's worth remembering that mostly white protesters took to the streets of Kansas City's Country Club Plaza in order to argue for the "Black Lives Matter" movement. They shouted "Hands Up, Don't Shoot" in solidarity with inner-city outcry that enraptured cable TV newswatchers across the nation. The difficult demographics of the #BlackLivesMatter social media might help to explain the rise of social media advocacy in general and how it preceded and possibly paved the way for the Twitter success of President Trump. 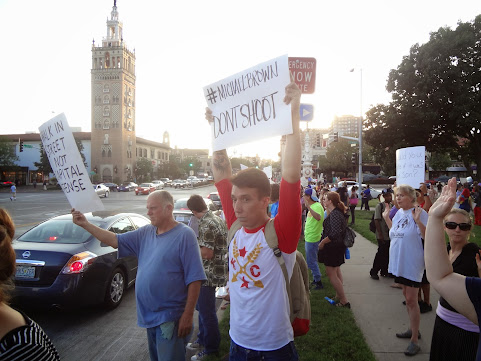 And so tonight, we share a few news items on the topic and how the KC & the nation has evolved following the flash point.

How Michael Brown's Death Gave Life to a Movement in Ferguson

How Ferguson has changed since 2014

Revisiting the worst night of the Ferguson, Missouri, protests.

Timeline of events in shooting of Michael Brown in Ferguson

Agree with one of the articles, the racial divisions have worsened.

This is the one instance where mayor sly james deserves credit. He helped diffuse a lot of the tension. He went to protests and encouraged people to protest non violently. That made a very big difference In KC when others in Ferguson were asking the community to burn itself down.

I miss the Ferguson fiasco. It was fun watching the chimpouts. I commemorated it by taking a big dump that looked like the gentle giant.

A riot based on a lie

^^^^ Many riots across the nation really. But yeah, never understood how you can feel sorry for a guy who punches a cop.

I’m celebrating the hero cop myself, I’m having a glass of woodsford reserve double casked in his honor!

I wonder how all those white people feel today? They should be feeling stupid and used for buying into the lies the msm spread so they could make money and they made a lot of money off of those lies. They helped fuel the “racial divide” along with Barry. Sad.

Twitter advocacy is not a real thing, just bots mostly and a lot of lies from both sides. I may not agree with the protesters 100% but at least they got off their asses.

^^^ and proved what? They got many good cops killed over the last five years. Idiots.

Not only has racial disparity and racist incidents increased but nearly all of the featured activist that were part of this demonstration are now deceased of mysterious or unsolved murders themselves... namely the guy in the flag shirt. That’s the bigger story here, TKC.

If it wasn’t for Trump Michael Brown would still be alive. Says every Antifa faggot and democraptastic socialist.

You can thank the Democrats for that

And tried to take his gun

after this episode no wonder cities are having a hard time finding anyone who wants to put on the badge.


That hands up don't shoot NEVER HAPPENED. Get over it you dirty liberal pukes.

If a liberal's lips are moving, he/she/it/etc. is lying.

You can keep your doctor.

Trump is a Russian agent.

It was the movie.

All of these accusations that he had his hands up were proven untrue in court. These fools are watching a movie in their heads that's not real. Brown attacked the cop and tried to take his gun. It was a legit shooting. The whole thing was BS and proven so in Court.

The CSI data showing bullet paths, wounds, blood location, etc., proved plenty. Additional proof was when the REAL news reported that eyewitnesses' statements submitted that Brown was the aggressor...who began loudly cussing officer Wilson as soon as Wilson drove near to speak to Brown...who refused orders to get out of the middle of the street and onto the sidewalk...who punched at officer Wilson through the open window of the police vehicle...and who grabbed for Wilson's gun with one hand while continuing to punch at Wilson. Some neighbors, who were also witnesses, said Brown was known for bullying, both physically and by bad-mouthing, around the neighborhood.

REAL newsers eventually got around to revealing the vid of that cigarillos swiping and convenience store staff shoving that Big Mike committed not long before assaulting Wilson.

The hashtag gen replaces the baby boomers. Not much difference if you look really closely.

Can you believe there is actually a marker on the side walk commentating the dead idiot ? Black culutre is a badly written cartoon.

If Michael Brown was still alive these past five what do you think he would be doing? He would have spread misery, that's what. Robbing people, carjacking, collecting welfare, father a couple, ore illigitamte kids, maybe even a murder, is what he would have been doing. I'm not saying he deserved to die but he didn't contribute to society any any positive way whatsoever eother. There are millions more black males just like him.

^^You don't contribute to society in any meaningful way either. This is not a meaningful existence geezer. Physician, heal thy self.

^^ Gramps is coming over this morning without teeth. Get Ready!

Tawana - you gotta be shittin' me. Trump lies day in and day out, about, well, just about every-fucking-thing. From the mundane, ridiculously immaterial things to the important items. What used to be a death knell for a politician's career is now normalized by the fucking Republicans. Obama said you could keep your doctor, he fucked up. The difference, Obama actually apologized for it. You don't want to start a score card on lying between the two parties, asshole Republicans will lose (well win, if we're trying to run up the count on lies). And they will lose/win driven by the epic lying performance of our Commander in Chief.

I long for the day a President didn't stroke out making everything about him and only used twitter to send out feel good messages to the country.

8:14 OMG!!! Everybody lookout! A snowflake meltdown is happening so don’t say or do anything to offend this pussy or it will be bad! Hahahahaha!

Lol, reopen the investigation?? Ha, it's already done. Instead of doing some stupid shit like that, I say we dig the dead motherfucker up and shoot him again!

Methinks Dad has burned thru all the donations...

There were literal race riots across the country from 2014-2016. Race relations are much better nowadays and anyone saying otherwise has a political axe to grind

Excellent counterargument by 8:56. Good Luck in junior high this year.

His family must have burned through the millions because they want to reopen the investigation. They would have sold him to a gang rival for $10 bucks a pound before he demanded death by cop.