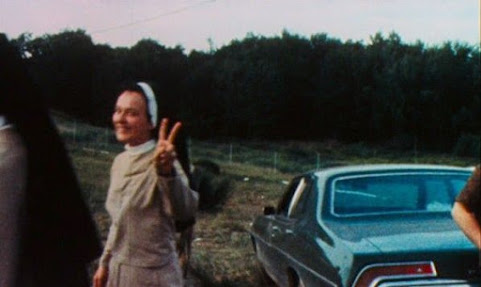 True story . . . TKC knows the nun in this photo. She's actually every bit as cool as she seems and continues her life's mission helping people last we've heard.

A few of our readers remind is that it's the 50th Anniversary of Woodstock . . . The good one, not the one where Fred Durst encouraged a riot and a mass  gang rape arson-fest ensued.

Accordingly, because we are stardust and fans of classic rock . . . Special thanks to a few of our most AWESOME READERS readers who remind us to at least mark the occasion and provide favorite further reference as is our custom.

Links for educational and news purposes . . .

VICE: A Radio Station Is Streaming Woodstock ’69 in Full This Weekend

Atlantic: Photos of Woodstock 1969, on Its 50th Anniversary

Guardian: Three days of peace: Woodstock at 50 – in pictures

Yahoo: Here's How Much Woodstock Performers Got Paid 50 Years Ago — and Who's the Richest Star Now

Popular Mechanics: How Festival Technology Has Evolved Since Woodstock

Now the hippies are the old ass hole that will not pay living wages.

^^ Get your own business and you can pay as much as you want.

I wonder how many sluts got fucked at Woodstock. Probably most of them got gangbanged.

That Limp Bizkit Woodstock was epic bro. Peace and Love.

@7:50-ask your mom. She was there. We called her the Woodstock bicycle. Everyone got a ride!

^^yep! That was her! @7:50AM-good luck with that Ancestry DNA kit you ordered!

Who is the nun? Can you do a personal interest story on her? Very interesting story, would like to hear it please.

There once was a Nun who was glad,
of a "religious experience" she'd had
but it wasn't the Almighty that lifted her nightie,
it was Father O'Reilly, the cad!

It was a counter-culture answer to a decade of political turmoil. Three political assassinations, & a riot, with egregious response at The Democratic Convention in Chicago.

Then, in 1970, four college students were shot & killed in "self-defense" by National Guardsmen 100 yards away!

There was a young monk from Siberia
Whose morals were very inferior.
He did to a nun
What he shouldn't have done,
And now she's a Mother Superior.

There was a young girl from Nantucket,
who washed out a few things in a bucket
but the gales and the breezes
blew away her chemises
so she threw up her hands and said "Goshdarnit"!