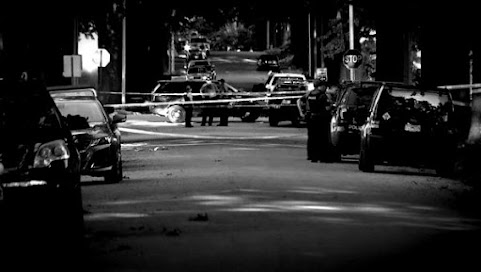 The news day concludes in much the same way it started . . .

KANSAS CITY NEARS THE MURDER CENTURY MARK FOR 2019 AMID AN HORRIFIC HOMICIDE SPIKE THAT HAS LEFT 7 PEOPLE DEAD IN THE LAST 72 HOURS!!!

Tonight's narrative and more deets after a man was left shot in the street . . .

"Officers responded shortly before 6 p.m. to a shots fired call in the 2600 block of Lockridge Avenue, finding a 26-year-old man in the street suffering from gunshot wounds upon arrival.The victim was transported to a local hospital and pronounced dead at 8 p.m."

Compare this to 89 homicides at this time last year as KCMO confronts a record breaking pace this year . . .

Fox4: One man killed in shooting near Lockridge and Benton on Kansas City’s east side

I guess the new mayor stopped tweeting out his sympathies because was getting repetitive. That's a shame, it would have been good for him to see the totals adding up.,

100 by September! Man that’s freakin sweet! Hoodrats don’t deserve to live because they got no respect for life. Get rid of all of them, sooner the better.

I don't think it's going to take till September. Sad.

We could have 103 by Sunday for sure, the revenge seeking murderous blacks hit high gear this month, wonder how many we’ve had so far in August, anybody have an idea?

What a crying shame.

When will they ever learn?

WHEREAS, that racist gun jumped right into that hand and forced that trigger finger to fire those racist bullets.

WHEREAS, the gun needs a healthcare program to access for rehabilitation services, to include presentations of cultural sensitivity (whitey's bad), lectures on equity and inclusion for economic opportunities (whitey is real bad), and an endless harang on whitey owes non-whiteys FREE everything (because whitey is the WORST!).

Oh, and WHEREAS, the bullets gotta get their ass with the whitey is at fault for murder momentum of blacks killing each other (you know, because whitey is the WICKEDEST, evar!).

Walmart having an ammo sale, damb ?

There is a negro who just ate a bowl of ramen noodels, got some pussy from a fire fighters wife while her hero man bank is at work at the homo fire station. Will this be the next negro to hold this years title of the 100th negro to be mowed down in KC? Bets are being placed at www.###IAFF###.com