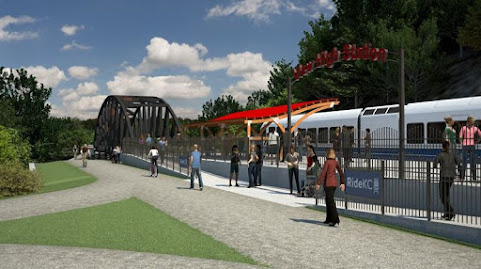 After the fact, here's a look at newsies attempting to explain the fed SHUT DOWN with an issue OTHER THAN THE FACT THE PROJECT WAS DREAMED UP BY A GUY SERVING TIME IN THE FEDERAL PEN right now.

A major Rails-To-Trails cycling project in eastern Jackson County, Missouri, that's been years in the making is suddenly in limbo following a decision this week by the federal government. On Wednesday, Jackson County stopped construction of the Rock Island bike trail after the federal Surface Transportation Board revoked the county's authority to operate the one-time railroad corridor.

Relax. Councilmen Bunch is going to wrangle up $400 million for bicycle lanes.

Another failed dummocrap idea that cost gazillions of dollars, the gubmint should’ve shut this scam down a long time ago.

The Star reporting on this is a joke. It makes no mention of Frank White. Mike Sanders set this crap deal in motion, but he had resigned as county executive before the deal was signed and sealed. He was county executive for only the first two weeks of 2016. If you read The Star you'd think this shit show was all on him.

I'm not saying he's not a piece of crap. I'm glad his corrupt ass is in prison. But I'm sick of terrible reporters cutting Frank White so much slack. He signed the deal acquiring this corridor. If the rail lines were being tore out and should not have been that is all on him.

He has been a complete disaster as county executive.

No trails. Build the wall instead with our tax dollars.

Don't forget Cleaver was saying to spend the money before we knew if we got the Federal Support to "show them we were serious". Now we have a serious mess on our hands, hung up and ill considered from the start. A forensic transparent reporting of the expenditures to date and recipients would be
most helpful.

This along with the Airport sets the tone for how boongoggles get fixed in
this town. Along with the exclusives, rather amazing. At least the FBI
decided to do something about this one. Why not the others, eludes me.

Cleaver held this up as some sort of brilliant transit play, go back and
read the reporting of that time.

Cleaver should go, give Quentin a chance, but if you have been part of the system for 20 years while this is how things are going, well then.......

i read a lot of stuff and i found that the way of writing to clearifing that exactly want to say was very good so i am impressed and ilike to come again in future..
friv jogos online
games on friv4school
a10 Games for girls