IS KYLR CRAY?!?! LAWYERS CLAIM HE'S NOT COMPETENT WHILST MOVING TO DUMP TRIAL & PUT HIM IN NUTHOUSE!!! 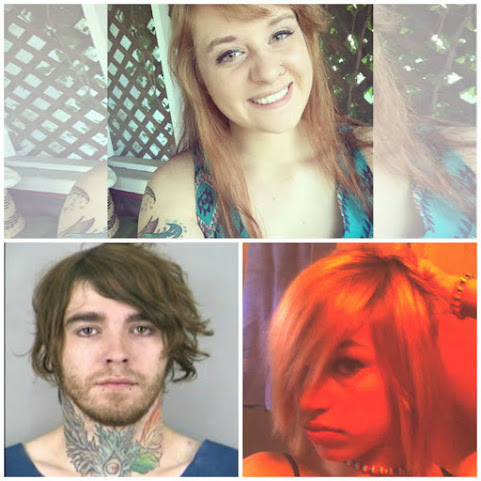 A brazen strategy and gambit to get a suspected killer out of Jackson County jail and into a mental healthcare facility . . .

Lawyers for accused double murderer Kylr Yust say he "suffers from a mental disease or defect" and needs treatment before he faces a jury.

Yust's attorneys filed paperwork Aug. 23 in Cass County Circuit Court that say a doctor who examined him found that he "lacks capacity to understand the proceedings against him or to assist in his own defense" and declared Yust "mentally unfit at this time to proceed," according to court records.

Due to that incompetence, Yust's attorneys argue that court proceedings, including his prosecution for the murders of Kara Kopetsky and Jessica Runions, must be suspended.

KANSAS CITY, Mo. -- Court documents just released reveal that the court determined Kylr Yust lacks capacity to understand the murder trial proceedings against him due to mental disease, and that he must be transferred to the custody of the director of the department of mental health.

No. No. No. He is not crazy. Knew exactly what he was doing. Putting him in a nuthouse will make him crazy. However, it’s not the job of other White men to scapegoat this guy and give him a lesser punishment for his sadistic, evil, murderous (repeatedly) endeavors. No, he should be executed like all the other wastes of life convicts who commit these kind of crimes. Here’s a shining example of White Male priveledge. Dope him up for the rest of his life - which he’ll enjoy too much. Meanwhile, the families of these victims will see no rightful justice.

Take that piece of shit out to a tree and hang him after breakfast.

^^We are a nation of laws in this country you UN-American fuck. Move to Venezuela!

Shudup, bLIEron! Posting anonymous, and yet, your incessant trademark jumps at replies to Chuck give you away. Not. Weird. Just. Funky. Being. Funky.

Remember the words "Liberty and Justice for all"?

I'm pretty sure this guy is smart enough to fool a psychologist.

This byron fag is a mirror image of the screwed up judicial system. These leftist fucks like him love to pamper killers while ignoring justice for others. It’s just another way fags try to subvert American society. The only resolution for this case is to stand him up against a wall and let the members of these two poor girls shattered families blow his head off, he’ll I’ll pay for the ammo

^^OK pop-pops, that's enough for today. You can scream and holler on the inter-webs after you take your nap. You seem really cranky! We'll have some tapioca and Matlock after you get up! Come on now.


To the asshole who trashes old people wear a yellow ballcap and black shirt and stand in the southbound lane of 435 about 4:45 for us you dumb fuck...!! make me happy and sure others

Hang the woman killer high in public from the light pole in front of city hall for all to see after a fair and impartial jury!

"Nation of laws" my ass.

If we were a nation of laws, then the Clintons would be doing life and about 3 dozen DOJ, FBI, CIA and bureaucrats from the previous administration would be in prison.

We are a nation of laws that apply to Conservatives, Liberals can do and say anything they want.

Fuck you, 9:21. The fact that this motherfucker is drawing breath is an insult to civilized society. He deserves to die screaming. And I hope his scumbag lawyer waits tables for the rest of his life for trying such a fucking sleazeball tactic to deny justice to these families.

Stick that piece of crap yust in a nut house. Maybe he will do everyone a favor on put a sheet around his neck.
And hang from the top bar.

@7:37 stated "We are a nation of laws in this country you UN-American fuck"

Kylr should have been following them and he would not be in jail.

Listen to Trump. All mass killers are mentally ill.

Which means they are all not guilty by reason of mental defect. Forget the death penalty or even prison. They will go to an institution for therapy.

Trump provides the best defense criminals could ever hope for. Who knew he was so weak on crime?

he killed a pretty young girl back in 2006, and was still free to do it again years later. i recommend what chuck has been sayin about this guy since investigators found the remains, and connected them to kylr fuckface. I also concur with the commenter who said him drawing breath is an insult to civil society. this guy walked around in society, tattoo adorned, probably in a drug riddled haze, no job probably, just a malicious seave on life that surrounded him, and that seave cost atleast 2 gals mortality. now, even now, he;s still trying weasel and wriggle out of the consequence, when he gave atleast 2 women we know about, he gave them the ultimate consequence. pick a tall tree, find a branch, find a rope, find a stool, be done with it.

I know Kara's parents and I say it is well past time to give these good people justice. Give the jagoff a good lawyer and a fair trial. I think the punishment for his crimes should be that the mothers of the women he killed should choose his punishment. I suggest something very painful and drawn out to give him the same chance he gave the women. Tie him down and a rope around his privates and one around his neck hooked up to a couple of Ford F250's, let the mom's drive.

Kyler's ink poisoned his brain, and he is a serial killer that only took 2 lives, had he not been caught there would have been more! I and cant wait to see him choke on some gas in the chamber. He wont here because the law here doesnt uphold the law, anywhere else he would be on death row right now!! For the families this should never have happened but since it did it should have happened in Texas, and Kyler Youst would be counting down his last days. His defense attorneys know he committed these murders, yet they still defend him which proves laywers are about money and not justice. His lawyers are just as deadly as him!!

Ok,ok, you are gonna hate me for this- and since I have never fathered children and only have limited experience raising em- I found all the boo-hooin by the parents over the last 12 years to be a cover for the most negligible parenting. YOU KNEW this guy was a psychopath the moment he showed up to pick up your daughter. Only when the worst happened (you suspected it would) did you move out of your apathy to become dol-gen knock-offs of John Walsh. You are as ridiculously indignant as some of the mommas cryin about their "saintly" gangbangas getting theirs down at the local house party.

Fuck you, victim blaming shitcunt. It's real easy to be an armchair quarterback and make stupid statements like that. You should re-read your inane comment when you get home, then fucking drink bleach faggot.

He should be punished to the fullest - and executed fast. BUT girls should take note that BAD BOYS are really bad and will sometimes kill you. if a guy is under suspicion of murder - don't party with him and leave in a car with him. If a guy has a gun, he will use it on someone if he has a record. Bar Boys are not a source of pride to brag about - they are your ONE WAY TICKET TO THE CEMETARY GIRLS!