HONG KONG PROTESTS FOR LIBERTY AS SEEN FROM KANSAS CITY!!! 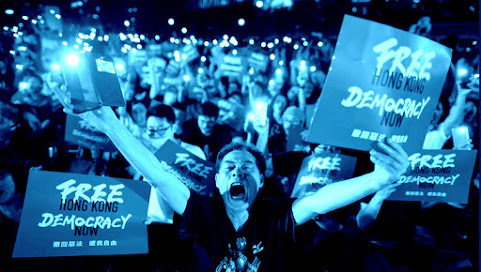 Admittedly, the direct impact on this cowtown might not be obvious but there is a connection nevertheless . . . And so, because some very smart people read this blog. Here's a few thoughts from a comment fave sharing his valuable insights into geopolitics, gun control and history as the world keeps getting smaller and smaller.

Chuck: From Russia To China With Love

We have seen this movie before. It is depressing, instructional and inevitable. In Tiananmen Square, the world saw a single, solitary man, defy the might of the Chi-Com Imperium in front of a tank. Then, soon after, 10,000 Chinese patriots were slaughtered in pursuit of what we take for granted. Constitutional protections, under a Democratically elected government. Free Speech, The Right To Bear Arms (How differently would the Chi-Com leadership view these protests if the populace was not disarmed?), the Protections against illegal search and seizure.

American dogs are in this fight, but only their barks will be heard. No American blood will be spent. It is what it is and actually, that is how it must be. We cannot assist, or, provide arms to these rebels. The stakes are too high. We will watch and wait... and hope.
##########

NPR: How Much Influence Can The U.S. Exert On What's Happening In Hong Kong?

Newt Gingrich At Newsweek: The U.S. Must Warn China: If You Attack Democracy in Hong Kong, There Will be Consequences | Opinion

CNNBiz: 'Big 4' accounting firms are on the defensive over Hong Kong protests

BuzzFeed: Have You Seen These Ads About Hong Kong's Protests? China Certainly Hopes You Have.

How WEIRD is it the local news barely mentions this and it's one of the biggest stories in the world right now. I'm sure there are some people form Hong Kong in KC. Weird.

But I think most people weirdly know that you need to watch more news than local. Not weird at all.

Has nobody figured out yet that there is nothing anyone can do to stop china from doing anything? If they do another tiananmin square on Hong Kong not one country is going to do a thing

God Bless the Free Chinese. The fight they fight, they fight for all people all over the world who would seek free elections and the right to direct, by way of the ballot box, their best future as they see it.

It is an ancient struggle whose provenance runs through the ruins in Athens, into and onto the field at Runnymede and the bloody English Civil Wars that then, finally finds true flower in 1776.

We Americans certainly have our differences, now, more than ever, but I don't think any of us, would not ask our Gods, whomever they may be, to watch over the Chinese Patriots who come every day, in the rain, through the weather, the tear gas, the rubber bullets, the mace, the threats of imprisonment, the beatings and intimidation to Cry Freedom while holding American Flags and singing our National Anthem.

Goddamn son of bitch that made me proud!

This resistance, against the innate, brute power of an evil that knows no senescence, will never end, for it lives in every one of us, in our greedy, power hungry hearts and is blunted and controlled, only through free elections and a Constitutional Government.

The officially atheistic Chinese government is showing you what atheists will do when they have the actual political power to act. That's why the debates the KANSASS CITY ATHESHIT COALITION has are worthless propaganda exercises.

If anyone wonders why the 2nd amendment is important, you are watching the answer being played out on tv in Hong Kong.

You will soon be viewing a defenseless protesting unarmed citizenry brutally slammed down by an armed oppressive socialist/communist government.

Personal self defense is important, but this government oppression represents the essence of our second amendment protection.

Freedom is messy, and sadly shootings occur, but disarming the citizens is always the first step towards total domination.

Combine the gun grabbing with threats to "restructure" the Supreme Court, and eliminating the Electoral College, and you are left with a clear picture of our rights being taken away one by one.

Only good that could come from this would be an all out civil war in China. Our economy would boom !

Here's a few thoughts from a comment fave sharing his valuable insights into racism, white supremacy and writing the way he thinks smart people sound.

Go for it Tony! Keep featuring a white supremacist on your blog! It'll work out great for you.

GOOGLE is assisting the Chi-Coms in their efforts to suppress the Free Chinese with Face Recognition programs, AI, Social Status based on adherence to "The Narrative" and surveillance in Chinese homes. It's 1984 on Steroids/Meth brought to you by, the most evil and powerful company in world history.

Far more nefarious and evil than the Chi-Coms, we have, here, in our very backyard, the most Fascist company in history, the most powerful company the world has ever known, seeking to control our elections, supplying disinformation about objective reality, parsing what we see in order to control political narratives and assisting Fascist/Communist regimes the world over, in their efforts to control their populations.

Google should be broken up.

Again, you ignorant slut, I seek no more leverage over the conversation for white people, than black people and brown people do, when they join "The Black Caucus", "CAIR", "La Raza" and the thousands of accepted, so called legitimate RACIALLY BASED organizations that seek empowerment based on skin color.

Whites are a world wide minority (Less than 10%) and are set to become a ethnic minority here in the US in a very short time.

Embrace white organizations in the same way, people who literally want white people dead and come out and say it daily, embrace organizations designed to promote their agenda.

Chinese citizens are punished by having their social credit score lowered for engaging in a number of different behaviors, including;

View image on Twitter
112
11:00 PM - Aug 15, 2019
Twitter Ads info and privacy
138 people are talking about this
As I document in the video below, Chinese citizens are punished by having their social credit score lowered for engaging in a number of different behaviors, including;


As of November 2018, 6.7 million Chinese people had already been banned from buying air and train tickets. That number now appears to be surging.

While many on the left and in the media decry China’s Orwellian social credit score system, they simultaneously advocate for a similar thing in the west, where people are deplatformed and have their right to engage in commerce revoked because of their political views.

“Big Tech has already implemented their own “social credit score” system where they punish people for their political views by deplatforming them, censoring their websites and closing their PayPal/bank accounts,” writes Chris Menahan.

“On the other hand, media outlets which push propaganda in accordance with the desires of our ruling oligarchs are rewarded by having their content algorithmically artificially boosted and handed millions of dollars.”

Imagine going to buy groceries with your credit card, but then having your payment declined because someone in an office in San Francisco thinks you posted something “hateful” on the Internet.

Chimpy, we are going to have to take your bananas away if you can't learn more words!! Try harder.

Chuck: TL/DR. Less is more. Maybe get back on the meds? You're raving again. Up the Thorazine will ya?

Reality Speaker - yeah, if only those protesters had guns. They could totally win a war with the Chinese oppressors if only they had access to guns! Just a reason for Chinese soldiers to mow them down via helicopter, tank, etc. Let's turn that area into another Syria, sounds good to me.

Thank you, Chuck, and thank you, Tony.

Great post and comments have even provided new info.
Imagine if many TKC trolls had a credit score! No more Cheetos for them. Banned at Walmart and QT. The ultimate shame.

I do agree with a recent comment, if the Chinese protesters were armed, they'd be mowed down with bigger fire power.

But overall, to Chuck's point--God bless those protestors. Takes huge courage to speak up there.

Also, imagine this happening in KC. Banning commenters from buying tickets at the new KCI. And banning them from riding the streetcar,or even a Spin or Bird scooter--and thus forcing them, I suppose to ride their bikes?? Illegal Cheetos in one hand, trying to steer with the other,to P&L district?

You have a learning disability.

The deliberate misreading of the Second Amendment is destroying our country.

Firearms in the hands of the now Free Chinese, not just the protesters - but all Free Chinese may indeed cause a more radical response from the Chinese, or, maybe not. None of you know for sure, it is just, as is mine, an opinion. My opinion, is that armed conflict in Hong Kong would reap these great benefits for the Chi-Coms.

Remember, this is a CATEGORICAL VIOLATION OF THE HK AGREEMENT.

• China could not be trusted to honor any existing or future agreement.

• Corporate exits from China would expand and accelerate.

• USA sanctions and tariffs would escalate and perpetuate.

• Investors in HK and China would flee.

• HK role as an Asian Financial Center would dissipate.

• China’s currency and markets could implode.

China's inevitable inward turn after the hostilities, removes ANY current threat they pose as an international power broker in the near future, in military and economic terms.

The Free Chinese, may think, that it is better to die on your feet than live on your knees. There are things worth dying for, and more importantly, things worth killing for.

God bless the protesters? You all have no fucking idea what is going on in China.

If the Chinese bomb everyone in Taiwan don't you think that would encourage more unrest in mainland China. Everyone always says the government will bomb all of it's citizens and put down an uprising and yet that doesn't work see Vietnam, Ukraine, Afghanistan, etc, etc,

Small arms can and do lead to successful resistance.