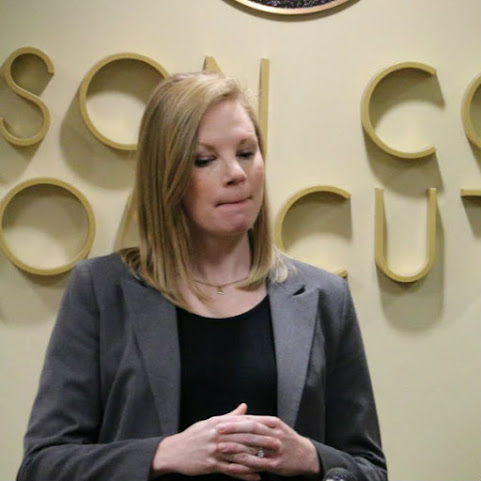 Campaign videos are nice but not very meaningful for those who want to dive deeper . . .

Here's why the last hope of Missouri Democrats has a real shot . . .

- She's better looking than Guv Parson. Sorry, life is not fair and American politics has devolved into a popularity contest.

- She has blasted corrupt Missouri TDD's that have garnered criticism across the State for their sketchy tactics.

- Guv Parson is an very nice, thoughtful and decent person who saved Missouri from one of the greatest Republican disgraces in its history. Historically, nice guys never win tough political contests.

For these reasons and so many more . . . The Democratic lady has a good shot at turning the political tide in the Show-me State.

Cannot vote for a democrat.

If she's running for governor she should resign as state auditor. There is no way she can run an unbiased audit while engaging in a partisan political campaign.

So far her greatest accomplishment is to get her name and photo in the newspaper a lot. Of course the Star being what it is, that's no great feat.

The Chief Petitioner is for Nicole cuz he knows she will slam dunk the clay Commission.

Trump will win Missouri by 300,000 votes and surely will bring Parson across the finish line.

Then the Chief Petitioner will cry and then his employer (the one addicted to TIF) will Fire his fat ASS .

Galloway is unbelievably naïve about the corruption that goes on in local government.
Corrupt Nixon appointed her and she is already tainted by her co-operation with the Clay County crooked developer coffee maker audit scam. She bent over backwards to accommodate Nolte, Witless and their gang of liars, arsonists and thieves.
She should investigate Missouri Water and Safety agencies for ignoring the duck boat problem that killed people in other states, including neighbor Arkansas which borders Table Rock Lake.
The Star will protect her just as the Star protected Sly for eight years; and the Star protected Mikey Sanders until indictments were filed.

I just want to turn her loose on the KCMO Water Services.... it's KC's Pentagon..tons of money going in... and poof.....

Quinton Lucas should demand state audits of all KC operations. To include the Port Authority.
Parallel audits should be done by a national accounting firm without ties to KC chamber.

Galloway should investigate the $12 million-dollar, Chicago, no bid contract to "improve customer service" in the Water Department. No changes or improvements were ever proclaimed by any of the media.
What did happen is that a flood of mailings began coming from Chicago and other locales wanting every KCMO property owner to buy water line insurance from a private company. The last several years the letters have been official looking letters from the City Manager. Why was Troy Schulte promoting private insurance? Only conclusion is that the $12 million was used to setup private companies to sell this insurance. Who are the silent partner/owners of this for-profit company created with taxpayer money?

"She bent over backwards to accommodate Nolte, Witless and their gang of liars, arsonists and thieves."

Getting a little desperate, Luanne or Gene @9:13?

Sorry your corrupt ass is just about to pay for your own crimes, but that's the way the chicanery crumbles, and it's crumbling fast.

Do you actually think any Clay County resident believes any of your bull crap any more? Gene's last escapade tryin to give he Annex to one of his major Contributing Developers and Luanne's running scared from TV reporters destroyed any last shreds of credibility the two of you had.

Hawley dismantled air claire. Missouri is pretty conservative and that will make it hard for any dem to win

This will be close, IF the Independent voters get on Board She May have a Chance. MISSOURI VOTERS ARE VARY SMART when it comes to studying Candidates The Urban Voters some of them go along with the Left Media and don't research the Politicians.

And now the clean Missouri corrupt law settles right into play. Dipshit repubs didn't research the law, and dems are completely in lockstep with how their party tells them to vote. Galloway now gets to gerrymander err, "redistrict" voting districts to best suit her chance to win. Voting districts will look like octopi (octopussies) so the urban prog voting blocks will extend out to control all major rural blocks. It's coming, conflict of interest be damned.

What size of brassiere does Nicole wear?

Jeff City gossip says that she takes it up the poop chute from Parsons.

Galloway is very liberal; appointed by Jay Nixon. Significant mismanagement of taxpayer funds was reported to her multiple times and she did nothing because it involved Democrats; friends of Nixon.

Sorry "Pot", but Grigrich's "Project RedMap" is on its last legs!

^^and yet completely right. Weird.

@3:57, huh? It absolutely has everything to do with State elections. And 1:09, the Republican's simply restored the redistricting that the Dems for so many years had mutated to permit the three major metro areas to virtually control the State. Yes, the majority of land in the State is Republican, and by far and away the majority of the tax receipts come from those same rural areas; thus yes, MO should generally be a Red state. But, I'll give you progs this: you snuck a tricky-ass law in, that most dumbasses in the voting booth didn't understand. And, you had a babe in the power-seat who had been told to go bulldog on corruption for the last 5ish years to make her a likable figure. Best chance at this point is Galloway resigns her position after she gerrymanders the districts, loses the election, and a Repub is elected into the Auditor's seat.