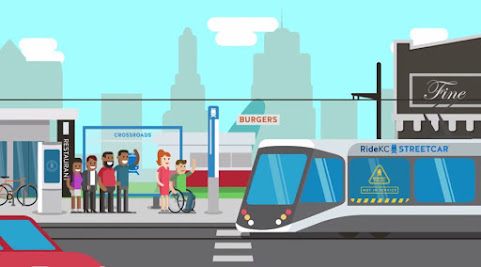 The world's most accurate encylopdia informs us that Scalability is the property of a system to handle a growing amount of work by adding resources to the system.

Accordingly, a very smart TKC reader offers insight into a problem confronting the toy train amid attempts to build up the system and ignore more dynamic trends in urban core transit. Read more:

The streetcar has added units. The problem is the frequency for decent service requires the line to run most of the time at laughable capacity. They can't scale up or down flexibly, or change routes. To address the ridiculous performance; they simply added units.

Whereas autonomous transportation just cycles in more units, having the ability to scale up or down very fast, and to meet projected demand effectively.

That is mostly conceptual but can be proven with a simulation with 6 passenger vans picking up people along the line, cycling in and out.

Buying more units and thinking of extending the route are now simply bad money chasing bad options. These guys seem oblivious that the game is moving on and tech knows how to deal with this effectively. Navya for example has deployed a great number of units. They partner with Softbank. They are responsive and can scale and reconfigure. Whereas the streetcar guys are stuck on defending a poor decision because there is now a machine of bureaucracy perpetuating the bad decisions. Much like they are perpetuating having KCPL dominate most energy projects around electric vehicles. They are simply not innovative or at state of the art. The Streetcar should now be called the gravy train, and maybe it's time for a real independent audit of who is lapping up the gravy. :)

Google, Apple, Amazon, Tesla will tell you this is completely sloppy, uneconomic, and bad thinking. Oh add Softbank and Cruise Automation to that roster.

The entrenched like to glom things as far as they can take them. How that gets treated by new Mayor Quinton will be interesting. Is he going to listen to the best information from all sides and make fresh evaluations??? Time will tell.
#########

Basic economic have always been lost on KCMO.

Once an "independent quasi-public" agency is created, it's primary priority becomes self-perpetuation and expansion.
PortKC is as good an example as the ridiculous "Streetcar Authority".
Frankenstein will prove impossible to even control, much less get rid of.
Wasted money as far as the eye can see.

Even the good Reverend Cleaver called it a tourist gimmick.

Mayor Q is too busy taking selfies! Stop bothering him from engaging in this important work!!

The Streetcar is 19th Century technology wasting money on a 21st Century transit problem. Make buses free and more frequent!! Use the infrastructure we have.

^^and you're too busy wasting what's left of your life on a blog for dying geriatrics. He wins.

Street car route should include Prospect

Great place for a homeless nigger to take a shit

Yes in your mouth.

It would help if it had its own lane. Whats the point of riding it when its stuck in the same traffic I would be stuck in when I am driving. Literally every other good streetcar system operates with a dedicated lane so it can bypass that 5p traffic. Sly & Co were so desperate for something to look like Denver they over looked the details. Typical.

Denver has had a free low floor, multiple doors, buses running along its 16th Street "Mall" for years. The street is closed to cars. These buses feel just like a streetcar with limited seating, low floors for easy entry and exit and multiple doors. And now they have replaced them with even better all-electric buses. No rails needed to be planted in the street, no overhead wires above (like the streetcar requires.) And they can move these buses to other streets whenever there is some event that needs overflow transport. Can't do that with a streetcar. http://www.rtd-denver.com/FREEMallRide.shtml