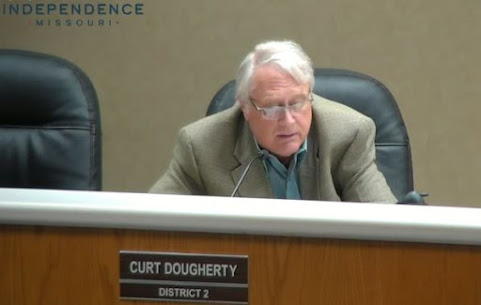 We can talk about free speech, political correctness and a divisive discourse but the fact is that a local council dude has virtually disappeared from the media scene when asked to defend or explain his remarks.

Most media outlets are getting the silent treatment . . .

"Dougherty, a former state representative, is in his second four-year term on the council representing District 2, generally the city’s northeast. His seat is up for re-election in 2020. Dougherty has not returned phone messages or email seeking further comment from Monday or a response to Wednesday’s call to resign."

FOR THOSE WHO DEFEND THIS ELECTED OFFICIAL'S BIGOTRY IN SESSION: WHY WON'T THE POLITICO ANSWER ANY QUESTIONS ABOUT HIS STATEMENT?!?

The political reality is that if he holds out a week this issue might blow over but constituents will remember that when a discussion got really intense, he was nowhere to be found according to local media.

He is a geezer, he is changing his pants. They are stained when he found out he was on this new thing called video.

Muslims want him to resign. Most anyone with at least two brain cells wants Muslims to GO BACK WHERE THEY CAME FROM.

Your preoccupation with “geezers” and bodily excremental functions is truly an addictive problem. There are many support groups that can help you through this gerontological affection and put you on the path to recovery! Good, luck, with a little help you can conquer this,

As tor the article, the commissioner owes the city an explanation for his words!

^^It was funny, you know it, I know it, everyone knows it. Good job 7:33AM. Somebody needs to crush theses geezer skulls!

I think he's guilty of not knowing his geography. Most of these merchants are Indian.

He's curt Curt! Too bad he didn't use a Tlaib move and say: "mostly owned by motherf*ckers who sell everything out the back door". Rashida Tlaib called POTUS Trump a motherf*cker ON HER FIRST DAY IN CONGRESS on January 4th. So, she hasn't resigned, because...uh, um, SHE'S MUSLIM, huh? And, they marry their brothers, bugger little boys and girls, and be gittin' wid their mothers.....so, calling others motherf*ckers is acceptable, apparently.

^^well the toilet president is a motherfucker. So????

It's funny these geezers defending the Nazi president. While their fathers actually went and fought the Nazi's, this most worthless generation went & became them.

It’s funny geezer hater is calling people nazis when he can’t defend his own party of nazi rapist demmocrims, it’s his only word when he can’t win the battle, stay down bitch, it’s for your own good, idiots like you can’t be helped, sorry. Sad.

^^I though his comment 10:50AM was dead on the money. Seems like it hit you close to home. He wins. You lose every day.

^^^ everybody knows you post the same stupid shit everyday and what’s really sad is you congratulate yourself, maybe your meds for multiple personalities isn’t working, you need to tell your dr to up your meds, k

Nuff nasty to go around said...

Well, Killa Shitty black geezers lure their daughters to hotels to rape and kill them.

Hey, zat u, bi-polar bLIEron @12:17, or some other self-congratulating idjit?

Friday morning Curt is gonna do a Hillaryesque half-assed apology. He will say he misspoke, and he meant to say "mudderfukkers", not "Middle-Easterns".

See. No biggie. Curt gets wayz tarred sometimes, and forgets to keep hot sauce in his purse. And, he gets his words confused when he's feeling rushed while running on C.P. Time, y'all!

May Allah shine his benevolent blessings on Mayor Great Tits.

Don't y'all get it? Independence City admins, elected officials and the parasitic First Family do or say whatever they want. There are NEVER any consequences.

They execute all of their deeds inside of a special type of vortex. Pre-installed, completely impenetrable layers of protection.

Again, there are NEVER any consequences for these people.

Expect NOTHING from Kurt.

Because he can say and do what he wants. As do the rest of them.

The conditions in Independence should receive extended empirical examination.

The results could be studied and cited for decades to come.

The common folk can only sit back and submit.

Our only hope is Karma.

^^^^^ He's a scumbag. Not a real politician, a grifter in my opinion and anyone who has ever seen how he deals with city business.

Speak up Curt. BE A MAN!

There’s always somebody expressing fake outrage over nothing. There’s no way I would ever apologize to any Muslim group.

Mr Dougherty has been said to use DIRTY Politics way back. His campaigns were fought dirty by people I know. Time for him to get OUT!