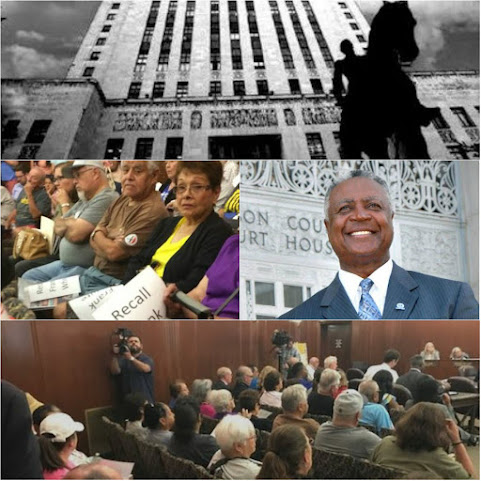 With special thanks to Courthouse Insiders, we talked about this to start the morning and now it's news fact for the MSM news cycle  . . .

"The legislature and County Executive Frank White left the meeting agreeing they need to talk to state representatives after residents complained of soaring estimates, but the verdict was that not much that can be done at this time. Many people are seeing their home's value double, triple, or even quadruple. Because of that, many are demanding a re-do.The Jackson County charter says White can correct errors in assessment and tax records."

Good luck with that. “Dat be rayciss!”

This was probably the best way to come at Frank White. Show him hurting poor communities and willing to kick low income people out of their own homes because he's so arrogant. Get him out of there.

I guess Frank didn't want to lobby Jeff city on our behalf.
"I'm only following orders"
And he still brags about what great job the assessor did. Horseshit.

Way to smart for the crooked politics of KC said...

Did KCUR give them lollipops to suck on during the interview?

I'm surprised no city or county officials have "recognized an emergency" with this. They seem to have no problem recognizing an emergency when they want to move taxpayer money into some politically motivated glamour project.

KCUR is now turning into a state run "news" organization. Thanks to Krapske.

Finally, I think voters might be wising up to what a disaster the Frank White Administration has become.

Frank must go if we're EVER going to get the county working properly again.

^^^ That hasn't happened for 25 years, very doubtful it will be the case now.

Just keep on electing people because of their race, their sexual orientation, or because they are "nice", or used to be a baseball player and then be SURPRISED that they turn out to be incompetent arrogant clowns.
And then repeat year after year.
It never changes.

I think all of you are forgetting that Frank White doesn't pay his own bills so obviously he doesn't understand what a big deal it is for him to make this kind of dramatic increase against others. Unfortunately, we don't all have a law firm willing to bail us out.

The KCPD is erecting barriers along state line to halt Frank White Flight of homeowners to Joco. Then for Friday and Saturday nights, the police drag the barriers to Westport.

I should copyright my phrase, Frank White Flight--but can't figure out the secret symbols here on TKC's comment site. Help me out, Radish or Chuck or Super Dave!

Don't forget, Frank did not pay HIS property taxes, and his house was hours away from being sold on the courthouse steps. Until...Mike Sanders' law partner bailed him out. Mike Sanders, who selected the out of town appraisal firm using dart boards at Mike's Tavern (yeah I drove Troost Sunday and see it now had another name)--darts and drones.

The same Mike Sanders now living in North Dakota, the forgotten state, the state north of George McGovern--in a federal prison for corruption.

Connect the dots. Frank is beholden to the Sanders Independence Mob. He's got to keep this tax raid in place, to pay back Sanders' lawyer. Just wait, it will all come out.

So come to Joco, those of you in Hyde Park or Armour Hills or Waldo. OUR Aldi stores are twice as big, and there is no armed cop at the door. For a very good reason.

^^Because security is delusion.

Everything is a delusion is Byron's crazy world. You make no sense .

I like what Tracy is done here. It's funny but it also makes sense, if Frank gets away with this then that is a signal to other officials that they can raise taxes without any justification but more importantly without any consequences. That needs to stop it's in everyone's best interest to shut that garbage down. No taxation without representation.

It's beyond hot mess. Nightmare for Kc homeowners.

KC and Jackson county folks reap the seeds of ignorant, lazy voting. If too lazy to read and listen to INTELLIGENT CRITICS, too bad. Unfortunately, TKC commentary is mostly preaching to the choir (except idiots like Byron, weird and geezer hater). With gutless television coverage, and no responsible newspaper available, the general population has a difficult time obtaining diverse opinions regarding important issues. Folks go to work, come home tired and none of the media make a serious effort to inform them on both sides of issues.

jacksongov.org/573/Our-Charter says Jackson County Executive Frank White Jr. is accountable to all of the voters in Jackson County Missouri, but it doesn't say he has the right to act like an uppity asshole.

Well, it only took three and a half years for these people to finally figure out Frank White is an arrogant yet ignorant, pompous but brainless, corrupt and incompetent bitch.

The jail mess should have been enough to have had people calling for his removal. He brushed off deaths and rapes as "stuff happens in a jail." He called one poor woman's rape in that hell hole "old news."

He has fired at least one employee who would not break the law. He has promoted others and given fat raises to those that would. He keeps a PR staff on the payroll to keep his image up at our expense.

He still won't tell us who he owes for bailing him out of his foreclosure. He probably never was eligible to hold county office because he owed on his taxes, and he committed perjury when he signed a sworn statement saying he didn't owe those taxes.

All that should have been enough. But now with these reassessments literally hitting some people where they live Frank White is finally going too far and most people are seeing him for the prick he is. Better late than never.

The Feds still have a lien on Franks shit?

Taxes have not been raised yet, although the potential for a significant increase certainly is there. We'll see when the various political subdivisions take their bites of the apple (set levy rates) whether they fleece the public or just take what they need to do their jobs.

I am cautiously hopeful.

did the taxes go up on the politicians houses?