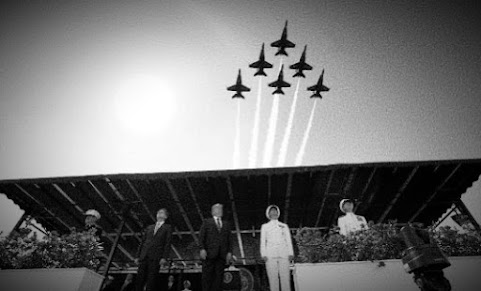 Over the past few days, we've noticed an important dichotomy in the discourse of Kansas City.

Check social media feeds for a bevy of prideful, cheering and adoring images of the Blue Angels in tow for the local airshow this weekend . . . And then notice continued criticism of Prez Trump, his policies and recent public speaking foibles from constant Kansas City detractors who #RESIST despite state-sponsored open displays of patriotism which often call upon all Americans to pause their disapproval of the Commander-In-Chief.

And so we ask, on this weekend dedicated to war machines flying overhead, illegal fireworks and cholesterol-laden BBQ . . .

Again, let's not forget that KC is a Democratic Party dominated town where union roots run deep and the NEXTGEN of progressive leadership is already taking hold.

Our allies across the pond have a wonderful term for their left-wing; they're called the "loyal opposition" but sadly American culture of fighting and winner-take-all competition have stifled most attempts at thoughtful conversation.

One side continually smears the other with insults including but not limited to "traitor, fascist and racist" -- The issues are interchangeable but the divisive rhetoric charged by social media smear campaigns is now a constant fact of life.

Nevertheless, a glimpse at local pop culture reveals that the weekend is dedicated to American military pride, again, with criticism from "many sides" mostly in a quest for political power.

KC Biz Journal Has Better Images Than The Garbage In Your Social Media Feed: PHOTOS: Blue Angels take to the sky over Kansas City

Bloomberg: How Is Trump’s Parade Offensive? Let Me Count the Ways

And yes, this is trite and cliché, but the nice part about life in Kansas City is a Midwestern sensibility that's able to allow for cognitive dissonance and politely ignore angry, intense and nearly overwhelming political slap-fighting differences in order to enjoy a good party.

And all of this inspires our playlist tonight . . .

Certainly, no criticism of the President talking about George Washington seizing the airports of 1776!

The planes are nice and I think most Americans enjoy them but you've got a point T, did notice that a lot of my more "progressive" friends carried on like the celebration and planes overhead didn't even exist. At the very least, was glad to see very little criticism. It's not just Midwestern politeness, what I'm hoping is that's it's respect for what others hold dear. We can debate about issues, ordinances and policies but at the end of the day most people who participate in American politics want what's best for the nation. That's why that news about the Russians making fun of Trump should anger both sides.

Worshiping a president like a God is not patriotic. Doesn't matter if it's Obama or Trump. Both have proven to be VERY fallible.

As the election approaches look for Der Fuhrer's Stormtroopers to threaten that anyone who doesn't support Der Fuhrer's re-election is a traitor. This happened a little bit under George W. Bush, but it will be much worse this time, & EVERYONE knows what will happen when he loses the election.

We do not serve him. He is our servant.

Look for Herr Fuckhouser in jail soon being cornholed nightly by Trump supporters.

Meanwhile Mark and Gloria Funkhouser had a house full of people as they had a wonderful party last night with all of us having a wonderful time and notably absent was Herr Byron. Weird.

Meh, military parades are overrated. The real power makes the toys and doesn't buy them.

The President owned the 4 th of July day and night ! Only the psychological deranged liberals could find fault with this great celebration of America ! Hey , you liberal nutjobs , you hate America so much , move your ass to Mexico and Canada and Venezuela!!¡!!!

July 4th is about our declaration of independence. A statement of values, not the military.

Regardless, I am glad Trump's bone spurs didn't keep him from participating in observing military operations. Now is he going to pay taxpayers back for the cost of his rally and making of his new campaign ad? At least send the funds raised from VIP ticket sales and bookings at the Trump hotels charged at twice the rack rate. Consider it a swamp drainage fee.

I wanted to know more about Gen. George Washington and his troops and how they beat British General Gordie Howe and his troops at the Battle of JFK or how the country came together when the Germans bombed Pearl Harbor.

@5:44, you should read "The Honest To God History Of The United States",
by Lou Dobbs, Mitch McConnell, Franklin Graham and Tucker Carlson.

7:09---Didn't Sean Hannity also contribute to that book. I already knew that Andrew Trump was responsible for the Cherokee Indians "Trail of Tears'. and that he always considered it one of his greatest accomplishments.

I thought it was a pretty good display of patriotism, very much liked it, a grateful nation.

Over the last 50 years Democrat Party has changed from a patriotic, blue-collar party to a party of communists, anti-American social misfits. I wish the left wing liberals that make up the Democratic Party would be forced to live in Russia, China or some other communist utopia. That experience may change their anti-Americans, self-hatred of our country. Democrats are deranged, hate filled sociopaths these days. They don't want to work but simply take the savings and earnings from the hard-working Americans.

^^^^ And the Republicans are engaged in an active attempt to overturn the Constitution and establish a One-Party Rule, with the full cooperation of the Wealthy, all the while screaming "GOD AND COUNTRY".

Should have dissolved that Party after any one of the three Depressions they put this Country in, they're all traitors!

Sorry @7:47, but no. Sean was invited to contribute, but a new family moved in next door to him, with a twelve year old daughter and a nine year old son, so Hannity was too busy "ramping the Ramparts".

WOW, so much hatred for the greatest country ever. Sad. With all its flaws, this nation is truly special. Feel sorry for those who cannot see that.

I've never seen such an awe-inspiring display of military might. Just think of all of the enemies of Israel our young people will be able to kill ! One Nation Under Zion.

@10:47 don't confuse contempt for the person presently infesting the White House with hatred for our Country.

In fact, love pf this Country is the source of the contempt felt by a majority of Americans toward the cowardly Con Man who was put I office by a gerrymandered election, and has caused more damage both internally and in Foreign Relations, than any other Chief Executive in US History.

Okay so our POTUS twisted some words around get tongue tied a little so what. Not like he probably doesn't have a lot on his mind. Hes humane, he fucked up a little no big deal. You assholes like Byron have done what to support or make this country better? No you lay around or sitting on your butts just pissing and moaning while waiting each month for your government check to arrive between voting losers like Obama into office.
Grow the hell up Hillary Lost and Bernie, AOC, Davids, Cleaver or Pelosi are not going to save you at all.

Big thrill. Nothing like having jets fly over your neighborhood all day scaring pets and small children. Whoopi, what fun.

If you watched Trump's little RNC commercial, you're a fucking moron.